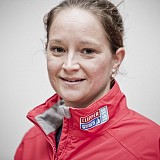 At breakfast today none other than Davy Jones (aka our only Shellback Craig) made an appearance, he came with a message, that us mere pollywogs have been summoned to stand before the Royal Court and answer to the charges brought against us overlooked by King Neptune himself (aka pollywog Knoticalnic). For those of you who are unfamiliar with this traditional Equator crossing sailing ceremony, Pollywog is the term given to people who have never sailed across the Equator and had their sins read aloud before the Royal Court. Once this has been completed and the punishments received the Pollywogs are declared Shellbacks.

The Pollywogs gathered wearing their clothes back to front and at high noon, King Neptune appeared with his (tin foil) crown sitting high upon his royal head, stroking his (toilet paper) long white beard and stamping his trident on the ground. Boy, he was not happy to be woken, some may even say he woke up hangry. One by one Davy Jones read aloud our sins they are as follows:

1. Skipper Reid: For extending her ‘holiday’ leg by 5 days longer at sea (King Neptune wanted us out of his ocean by the 26th!)

2. Alex Laline: For tarnishing King Neptune’s fresh sea air with the stench of his foul feet.

3. Chris Geary: For overfeeding King Neptune's fish with his recycled dinner, they are worthy of more than second hand food!

4. Craig Downham: Being a shellback already this seaworthy gentleman got off lightly.

5. David Juniper: For his dramatic vomiting/poo fest in the first week of our voyage and washing his vomit covered clothes in King Neptune's sea.

6. Debs Spicer: For disturbing the trouble bubbles of the poo machine from King Neptune's spa.

7. Doug Millar: For making King Neptune dizzy as he watched the mighty Clipper Telemed+ complete a double tack, whilst Doug was at the helm.

8. Elaine Hargreaves: For waking King Neptune during the early hours with her hacking and 'singing' out loud.

9. Hal Stokes: For damaging King Neptune's eyes with his brilliant white legs - this was even while he was wearing his sunglasses.

10. Han Kim: For waking King Neptune with his shouts of 'bearing away' as he over-powers the boat again.

11. Javier Sopelana Martinez: For too much siesta time whilst on deck. King Neptune was concerned Javier was not alive as he has only seen him horizontal.

12. John Randall: For his excessive grooming and extreme use of the budgie smugglers.

13. Justin Howard: For doubting that he was wearing the pants of power (harness) when his boat needed him, King Neptune does not look fondly upon Pollywogs who feel threatened by his rough seas when given roles of power.

14. Linda McDavitt: For disgracing King Neptune's court with her late night pole dancing around the forestay.

15. Mark Stevenson: For disturbing King Neptune's fish with his inappropriate filming, nobody likes the paparazzi!

16. Mark McCauley: For bearing his builders bum whilst in the galley - King Neptune does not approve of acts of indecency.

17. Mark Jenkinson: For throwing the boat hook into the sea. You hit King Neptune on the head - you could have had his eye out!

18. Mike Turner: For his whispers - King Neptune can't hear you!

19. Nicholas Abramczyk: For talking to people as if they are seven years old. King Neptune doesn't like people to think they are smarter than him, even if you are hangry.

20. Nigel Odling: For taking a photo of the moon at night with the flash on hoping he'll get the reflection of the moon, this hurts King Neptune's eyes.

Each crew member received their punishment of kissing the Royal Baby's (aka Han Kim) belly that was greased up with a thick layer of Marmite, followed by kissing the Royal Flying Fish. The crew were all declared Shellback and the Queen (aka Nigel) gave a speech and declared the court over.

The Equator shenanigans did not stop here as some crew members decided to have a ceremonial haircut, with hairdresser Ryan giving Han, Tony and Hal mohawks, and shaving off Linda's lovely locks. Others celebrated in their own ways with sea offerings and cigars/last cigarettes smoked.

Wather/Weather: The breeze of the upwind sailing is keeping us cool above deck making conditions slightly more bearable as the sun has been high in the sky with barely a cloud to be seen.

Wildlife: Flying fish attack - just Elaine has received a fish slap today. We have been stalked by 5 Terrordactyle like birds for the whole day, catching a ride on our wind.

Jenko, UK: "Happy Birthday Mum! Hope you have a great day... I helmed to a starry night to ring in your birthday this morning... It was awesome! Love you, Mark."

Thanks for tuning in folks...

Today was a great day. Exciting to safely sail under ideal conditions for all of us currently on board into the other hemisphere... For our fellow Clipper Telemed+ crewmates who live this side of the Equator... Here we come.