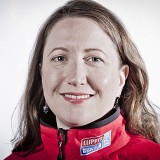 So here we are at the finish of the 2017-2018 Clipper Round the World Yacht Race. We've just crossed the finish line near Liverpool and tomorrow will begin our sail up the Mersey River into Albert Dock, where we first left nearly a year ago and where our friends and family await us. What a ride it's been!

This last leg (Leg 8) started out LeMans style again, just outside of New York. A solid start for Dare To Lead, where we kept in the top 3 early in the race. As with our previous race up to New York, the race across the North Atlantic involved lots of tacking and strategic navigation, ending up with an early split in the fleet. In each race there is a Scoring Gate, virtual marks set up to give extra points to boats who reach it; however it is often out of the way and in this case was South the Rhum Line. This tempted several boats into diverting South, who also hoped to catch part of the Gulf Stream and get propelled ahead.

Those of us who headed North had been monitoring weather forecasts which predicted a large wind hole evolving South of the Rhum Line and which we were keen to avoid. Our plan was not to jeopardize a potential podium position for the sake of a few extra points. As always, relying on weather predictions can be a gamble and it looked like for the most part it would pay off. Unfortunately the aforementioned wind hole never materialized, and the Southern portion of the fleet carried on full steam ahead. In the end, Garmin, Visit Seattle and Unicef edged us out to claim podium spots and despite a valiant effort we were left with a mid-pack finish into Derry-Londonderry.

Derry-Londonderry lived up to its reputation as a lively and welcoming stopover and the crowds were lined on the Quayside to cheer us in. Local boat owners moored nearby had airhorns and banners out to welcome the Clipper fleet into Foyle Marina. It was good to have finally arrived!

During the stopover I had the chance to participate in a Dell Rugged corporate event. It was great to network with others users of Dell products in the marine industry as well as other sailors and adventurers undertaking extreme challenges. The following day Clipper hosted the same participants in a sail day on board Qingdao at the mouth of the Foyle near Greencastle. The winds were light but everyone still got a flavour for life on board a Clipper yacht and a few tried their hand at helming!

The final race start in Derry-Londonderry was also a spectacle with crowds cheering us off both at the Quayside and at the start line in Greencastle. This start was traditional, with a countdown gun and a fixed start line and course to be navigated around. We positioned ourself well and with the starting gun blast we were mere inches away from the line. We had a solid lead out of Lough Foyle and for the first few miles of the race. Sadly light winds turned a promising start into a drift-off among the fleet and it became anyone's game.

As the days went on the second part of Leg 8 involved countless tacks as the fleet navigated around the coast of Ireland. It still remained anyone's game, but as we began to approach the Irish Sea it became clear that Qingdao and Liverpool 2018 had pulled ahead. Choosing your angles and timings of tacks can be a tricky business and in the end, hats off to these teams for getting it right. Our strong downwind skills meant we picked off a few competitors towards the finish but ultimately Dare to Lead crossed the line in 8th place, for a 7th place finish overall in this year's race.

It's been a long year – sometimes exhilarating, and sometimes exhausting. Overcoming the crazy seas, harsh weather and difficulties of living life constantly at an angle have helped build character and has given us memories we'll never forget. Many thanks to Dell for supporting myself and the broader Clipper fleet on this crazy journey. Our Rugged Laptops have been 100% reliable and have been our lifeline to the outside world, running our navigation software and incorporating information from our peripheral sensing and tracking devices. Without them we'd literally be lost!

I'm not sure how I'll adjust to being back in the real world in a few days' time. Despite the physicality of such an undertaking, there is a refreshing simplicity to life at sea. Eat, sleep, sail, repeat. For now, my body will appreciate being able to walk on a surface that doesn't move and sleep in a bed that doesn't try to eject you with every wave. I will head back to work and in a few months time my mind will begin to wonder... what's the next big adventure? And for those wondering if a Clipper Race might be in their future – if I can do it, you can too!

Thanks for following this wild race – what a year it's been!