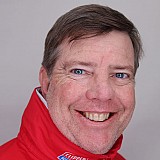 I’m a returning legger. Approximately five months ago I set sail from St Katherine’s Dock, London for Punta Del Este in Urguary (Leg 1) aboard CV27 Dare to Lead with Guy Waites, Hugues and 15 other newbies to the Clipper Race. Leg 1 was truly an amazing experience, a roller coaster ride of soaring highs and depressing lows, so it was with mixed feelings I returned to CV27 for Leg 6 the ‘Mighty Pacific’. A blend of excitement for the exhilarating sailing, learning new skills, laughter with my new friends and amazing sights tempered with dread of the discomfort, lack of sleep, couscous and of course the … heads (bathrooms).

Now I’m back on board CV27 and it’s day four of our ‘shakedown’ race, a 750nm Subic Bay to Subic Bay sprint. After five months away, a lot is familiar but much has changed. Most obvious, half the crew are new. I’m back on ‘Rolex’ watch with Jim (call sign ‘the seagull’), Michelle, Kevin and Steph, but gone are VOD and Dr Gately, replaced by Dave B and Dario from ‘Swatch’ watch and new crew mates Bruce, Kate and Patrick. There are eight ‘worlders’ on CV27 and one of the only crew I believe still to have our full complement. Steph, call sign the ‘Scouser’ rejoins with me from Leg 1, plus seven others either joining for their first leg or having already completed several. We also have a new AQP, Al. In total for this Leg we have 21 on board compared to 17 for Leg 1. I thought the boat might feel much more crowded but, so far, it's not too bad and the extra hands help spread the load.

For life on board, the crew have had five legs to improve things and there are a number of innovations to make life a little easier. There are new fiddles on the stove help stop the pots and pans sliding everywhere. A wash bucket in the forward head for fresh water to wash with (the tap on the sink is salt water only). Dry bags help tail halyards and sheets, keeping the deck neater and reducing ‘pigs ears’ or twists and tangles. The crew are also much more slick than Leg 1 when we were all beginners together. The food is also much improved, I think someone snuck couscous into a meal yesterday and it was hardly noticeable! We also generally have dessert with meals and yogurt with breakfast.

We still have moments of superb sailing. For example riding on the bow with Bruce (call sign ‘buckets’) on the first night to check sail trim. Calm seas, a full moon and a nice wind pushing the boat along. Wind holes are still frustrating, but make for memorable sunsets, last night we had the orange sun in a bronze sky descending into a smooth metallic blue sea. The watch system has reversed, due to very hot days we now have two six hour watches at night and three four hour watches during the day. This makes for long nights and it's good to be engaging in the fine art of ‘blatherskite’ (look it up) again with Jim Feldkamp. Though we miss Dr Gately’s contribution, ‘Buckets’ is making up for him. Interestingly, Buckets has also taken on the bunk above me that the Dr had, though he enters and leaves it with far more grace, if less amusement than the Dr did.

Speaking of bunks, the accommodation hasn’t changed and makes a backpacker dorm seem five star. Ventilation is poor and another thing that didn’t change from Leg 1 was the heat. In Leg 1 we crossed the equator and one of the real highs was swimming in water 5km deep and 600nm from the nearest land. However, it was stinking hot! Some long time readers may recall my blog from Leg 1 ‘The world’s most expensive diet program’. Stifling hot, and very rough on the tail of Hurricane Lorenzo, so the sweat generated in our foulies gave a whole new meaning to the name that had nothing to with bad weather. This time we don’t have the rough weather but we do have the heat. I had been expecting Leg 6 to be freezing cold, so I bought the arctic version of the south ocean sleeping bag. Obviously, way too hot for sleeping in this race, but I was able to get a very nice fitted sheet set in Subic Bay for 300 pesos. They have a lovely floral print, reminiscent of a 1970’s mau mau. 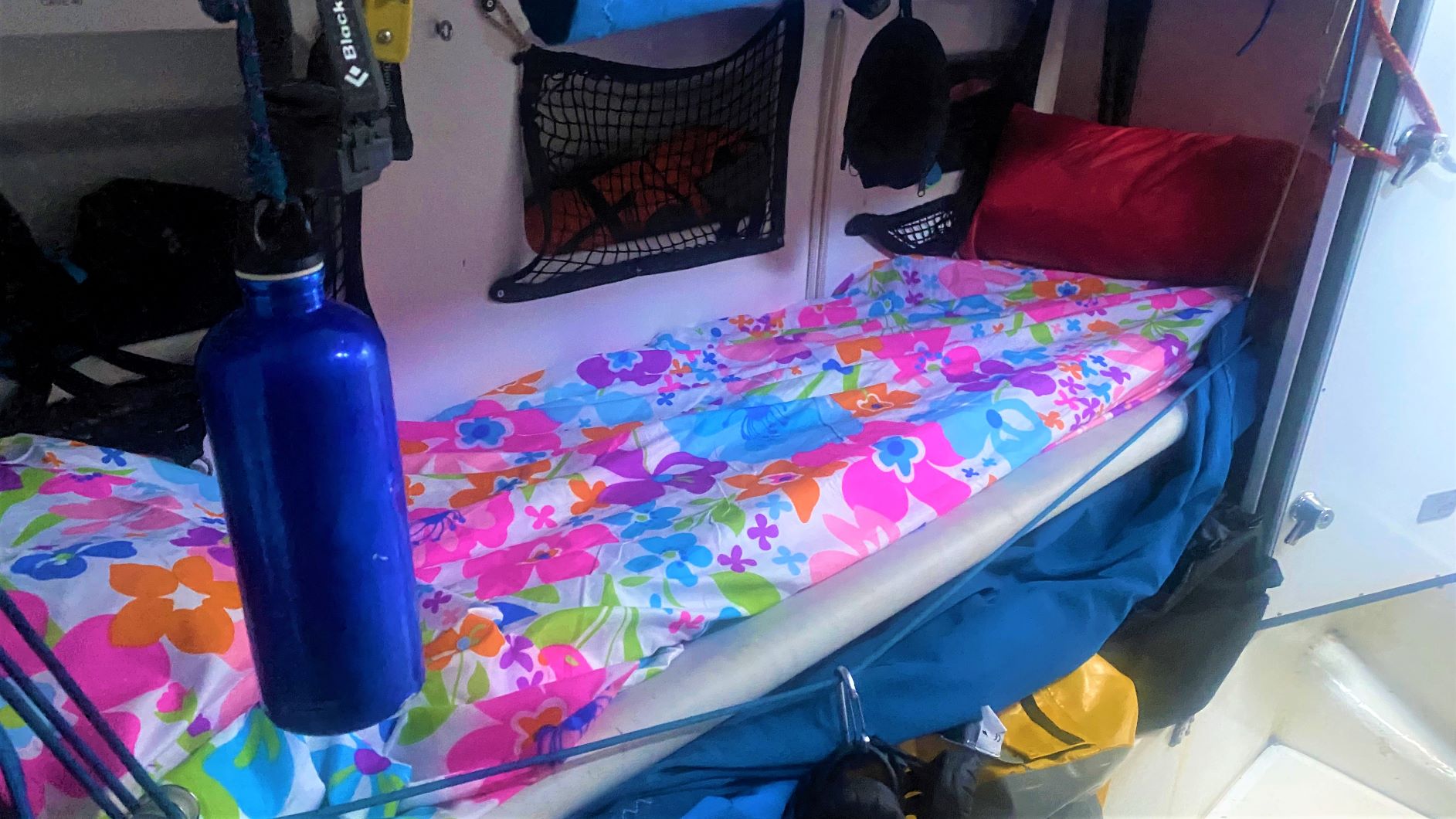 Interestingly, I’m back in bunk P6 that I shared with Trish on Leg 6. Trish set a high benchmark, but so far my new bunk mate, Frenchman Serge, is equally neat and tidy. I have yet to do mother duties with Serge, and I hope he’s up to Trish’s cooking standard because I’m not!

When asked what I liked least about Leg 1, the answer without question was the heads! Though after five months the full horror had faded to an amusing anecdote. Unfortunately, nothing has changed here and the joys are many! Men have to sit as it's hard to aim in a lurching boat, but there are no seats for safety reasons… We also have to share cleaning and some of the crew mates have an artistic talent that would make Rembrandt blush. As mentioned earlier, there is now a wash bucket in the forward head, but a wipe down with a damp cloth doesn't make too much headway to multiple layers of sweat, particularly as its so hot and airless in there fresh layers reappear instantly. And finally the moment I hadn’t been waiting for. As I zipped the curtain (no door) I realised there was an additional problem. With the boat on a starboard tack at a 45 degree angle, the inflow pipe was out of the water and flushing was a hit and miss affair. Nevertheless when you’ve got to go… so I went and memories of disgusting experiences came flooding back to me, much like the floaties coming back from the blocked drain as I pump furiously. But the tide slowly rose and spillover panic set in.

Yes it's good to be back! 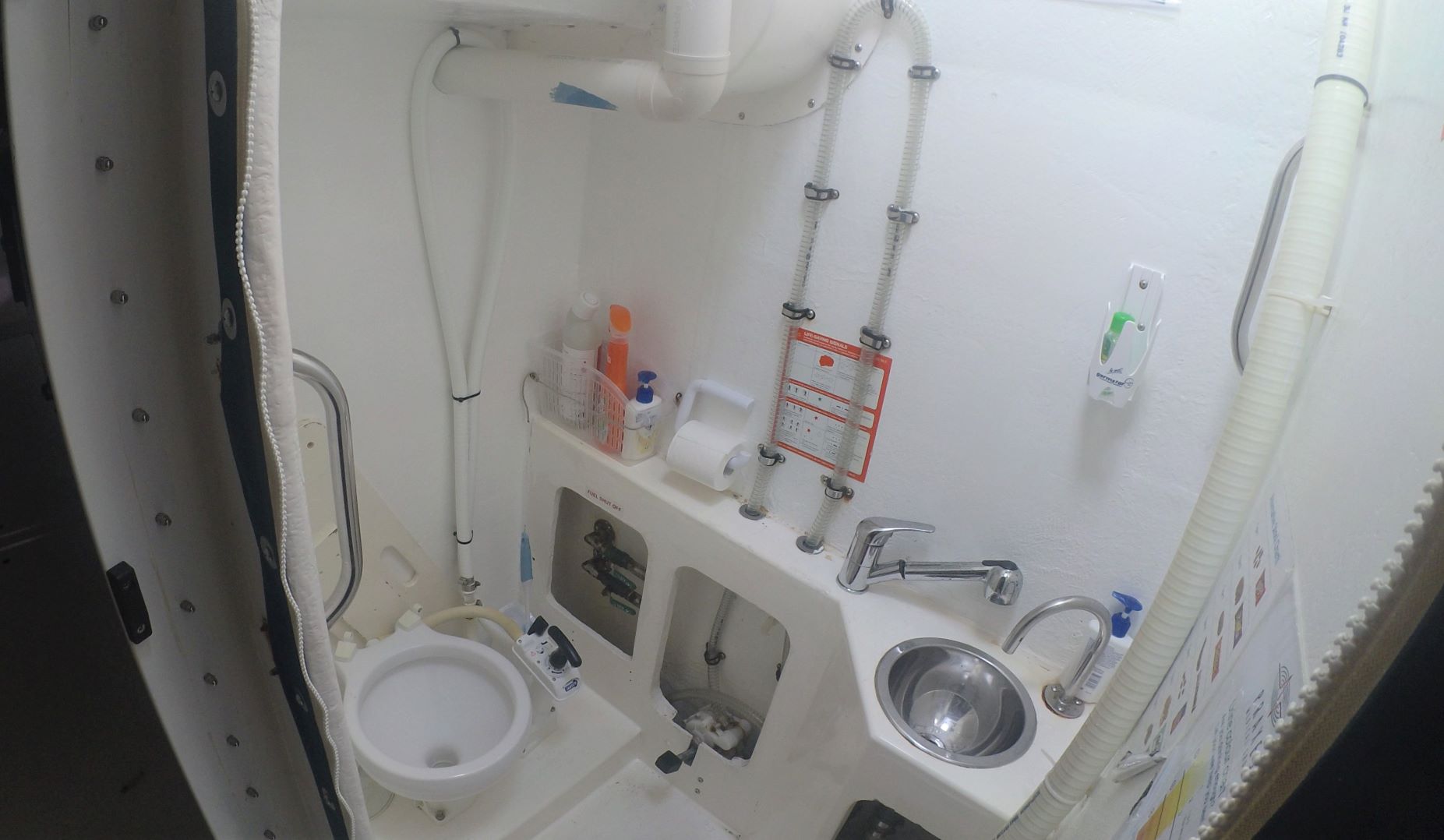