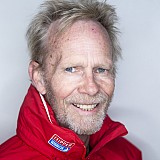 Yesterday was eventful with difficulty getting the Code 1 spinnaker to fly. Graeme unfortunately got on the wrong side of the sheets and launched himself over the side, propelled as an arrow in a bow. He wriggled serpentinely and caught hold of the shroud and was soon back on deck with Jim’s help. The cry of ‘Man Overboard’ stalled, dying as his feet hit the deck. None of us had time to comprehend the situation before it was all over with no injury other than rope-burn.

Sailing through the night was peaceful as we had GoToBermuda steadily opening a gap as we tried to make our way further downwind. A waxing moon, interestly lit, from right here in the northern hemisphere laid a trail of glittering light on a quick silver sea by which to steer. White horses rode the backs of the waves disappearing and reappearing elsewhere as if we were trapped looking from within a kaleidoscope at these ethereal ever-changing shapes.

Shooting stars kept us company in the dark with dolphins greeting us in the magical morning light. Louise, Trisha and crew delighted in naming them all. Some no doubt being christened multiply with each airborne appearance.

I’ve just got up to my afternoon watch and enjoyed a great frittata cooked by Dario and Fitz. The wind is fickle and the fleet is converging on the finish line. Shipping channels are getting in the way like air traffic control zones forcing us to go round them. My suggestion of masquerading as a commercial vessel raised a chortle.