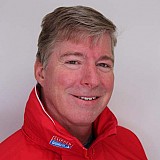 Hello sports fans! Well, as you may know we have left New York City (NYC), and have just finished the Le Mans Start of Race 14: a 3000 mile sprint from NYC to Derry~Londonderry, Ireland. And as such, this is the last time any Skipper can play their ‘Joker.’ This concept provides Skippers who do play their card, a chance to double their points for the race when they arrive in a specific port at the end of a leg. Needless to say there is a lot of strategy that goes into deciding when you want to play your Joker, and have those points added to your overall score for the entire circumnavigation race. As luck would have it, our Skipper, Nigel of Dare To Lead, his great friend Dave, the Skipper of Seattle (aka Statler and Waldorf from the Muppets), and Mike from Visit Sanya, China have all decided to play their Jokers.

Unbeknownst to most of our readers, these crusty old sailors have been tagged by Sir Robin, as the senior citizens of the Clipper Race. Their resumes read like a history tour. Mike was on the first boat to bring potatoes from the new world. David was in law enforcement with the Sheriff of Nottingham, but took to sailing after the War of the Roses, and Nigel helped Shackleton sail from Antarctica to South Georgia Island.

Matter of fact, when the concept of the Joker was first discussed these three thought that it meant court Jester! But after explaining the concept they eagerly decided to play their card. These gentlemen are all competing against each other. These Three Amigos, are now locked in a cosmic struggle to find which old stag can show the young bucks on the other boats some old tricks. Because these silver-backs will not take a backseat, or any guff, from those whippersnappers on other Clipper Race boats. After all, old age and treachery always overcomes youth and skill!

Now the ‘over and under’ in Vegas suggests that this will be an exciting race between three grizzled professionals. Let us hope that these jokers can live up to their moniker.