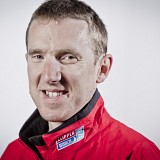 How I Blew Up A Spinnaker

It was a dark and stormy night. The good ship Garmin / CV22 / Black Pearl (delete as appropriate) was running downwind under Code 1 – our lightest spinnaker – and full mainsail with around 9 knots of wind and yours truly at the helm.

A light drizzle started – we checked the radar but saw nothing serious – but suddenly the wind began to increase. Very soon it was way above 20 knots and it was all I could do to keep us as downwind as possible; Code 1 flying merrily far far beyond its maximum recommended apparent wind speed. If I could only keep it full we may get away with it; despite the now driving rain making life difficult for all the watch on deck.

Unfortunately, as well as increasing wind speed the clouds brought changing wind directions too. The wind would veer and back (move clockwise and anti-clockwise) by 10 degrees regularly, and compensating for this was a constant struggle. After about 10 minutes of some of the more desperate helming I’ve done, I turned the wheel just a little too far downwind, and the Code 1 collapsed behind the mainsail.

With no power at the front of the boat, the centre of drive moved aft, which turned the boat sharply into the wind – known as a broach. Now flogging into 20-25 knots of wind (I wasn’t paying too much attention to the instruments) it very soon tore itself apart. By this time GT had been woken, and he and Henry Durman (our mate) appeared on deck to bring it down and into the sail locker, and hoist the Code 3 – a sail far more suited to these wind speeds.

Since we are still only 8 degrees north of the Equator we were all in shorts and t-shirts and, by this time, very wet and cold.

Now as I type this Nell Wyatt and Henry are working hard on repairing the sail – which looks like being a big job! I would like to both apologise for causing vast amounts of work, and, as we haven’t had any damage on this scale yet for the whole race, commend myself as an employment provider to sailmakers everywhere.

Still, I’m more impressed by the fact we made it more than halfway round the world without damage on this scale before now, mostly due to GT’s innate sense of impending squalls.