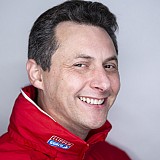 Once upon a time, there were five jolly good friends who all loved sailing. They lived together with ten other people on a magical boat called GotoBermuda. The boat was bright blue and pink and the friends sailed it all over the world. People would get on and off the boat at different ports, but the five friends stuck together and called themselves “The watch of Shelly Bay” which was apparently a place in Bermuda, although none of them had ever seen it.

The five friends really enjoyed living on the boat together – and they were a lovely team who looked out for each other.

First, there was Mike, who was the serious one and often noticed things the others wouldn’t – like a broken wire or a worn sail. Mike kept everyone safe and was always first to go below

and look on the computer for other ships or sunken reefs that might cause the friends some mischief.

Then, there was Thierry who had done a lot of sailing on another boat until he joined the watch of Shelly Bay for a holiday, and loved it so much that he came to live permanently on GotoBermuda. Thierry knew a lot of things about a great many subjects. Often, when the others were not sure exactly what to do with the sails, Thierry would patiently show them.

Yvette was the newest member of the family – she was the bubbliest person you would ever have met and was always the first to ‘have a go’ and try new things. The others all loved Yvette because she was so positive it made them all feel good and they tried to show her all the things on the boat so she would be comfortable living with them as soon as possible.

Next, there was Andrew who was calm and patient. He didn’t know much about sailing, but he did know how to make the rest of the friends laugh and feel happy. He was something called a ‘watch leader’, which basically meant he made sure they were sailing in the right direction and avoided anything dangerous. If he spotted something that the watch of Shelly Bay didn’t know how to respond to – he could wake up the wisest person on the boat who was a man with special powers, called ‘The Skipper’.

The Skipper lived in the farthest corner of the boat in a special bunk, surrounded by blankets. He had been sailing since sailing was invented and knew everything about the boat – That meant he was able to sort out any problematic situation that the friends might have got themselves into – which, being adventurous sorts of people, often happened to the watch of Shelly Bay. Andrew was meant to call the Skipper quite often, but sometimes he didn't because the friends all liked to pretend they could solve problems by themselves. If we’re honest, this sometimes got them into trouble with the Skipper, but fortunately he cared a lot about the friends on the boat and forgave them quickly, especially if they made him coffee.

The final member of the family was Elizabeth, but for some reason, everyone called her Freddie. Freddie was an absolute brick who would keep everything going, even the toughest situations. Sometimes, out at sea, the wind got up and the waves would crash over the bow – The other four would huddle in the boat and try to keep out of the waves, but Freddie, who was a stalwart sort of girl, would tell the others to get up and hoist the sails. She would stand up in the face of the gale and the others would all follow along. “Come on chaps” she would shout, and “come along” they would. Up to the bow, they went – getting soaked by the wind and rain. They would hoist the sails and sail out of the storm.

Today was a day like many others on board. Freddie appeared in the galley looking tired and rubbing her eyes. “Morning” said Andrew. Freddie said “hello” and tried a smile, because Freddie was the sort of person who believed in smiling, but she hadn’t slept too well and even for her, it was a bit of an effort.

Mike, chipped in - “I hear there is a reef up ahead. We need to take care today not to hit it” The reef was over 100nm away, and wasn’t really a danger, but Mike would always point out the closest risk, even if it were far away.

“So, where shall we go today?” said Yvette. “Let's go on an adventure and find a new port to stop at”.

“Hmm, said Freddie” - slowly waking up...”I heard there is a magical port, not far away. It's called Subic Bay and they have something called a shower for washing under and a magic box called a washing machine where we could wash our clothes”

“Ooh, super” said Andrew, who wasn’t really sure if his clothes needed washing or not as he wore the same t-shirt everyday and it didn’t seem to smell to him. “Sounds lekker” said Yvette, who came from a place called South Africa and sometimes said funny words the others didn’t understand.

Thierry and Mike also agreed that Subic bay sounded like a jolly nice sort of place – especially when they discovered you could also get lashings of ice cold beer there.

Right-oh, said Freddie. Now fully awake. Let's get out the big Spinnaker and see if we can get there by tea time. Thierry ran down to the little room where they kept all the maps and quickly found the fastest way to get there. He entered the route onto the boats computer and, up on deck, a line appeared on the little screen by the big ships wheel. He explained a lot about angles and wind coefficients and other things which the others barely understood – but they trusted Thierry and he had never been wrong in the past so they nodded and agreed with everything he said.

Freddie was already on the companionway steps - “Lets go” she said and up she went, into the sunshine, pulling on her life-jacket as she went… Up on deck, the sky was blue and the little, puffy cumulus clouds were dashing past on their way to wherever it was that they wanted to go.

Freddie, Andrew and Yvette busied themselves with all the ropes while Thierry and Mike went into the sail locker at the front of the boat to get the right sail out. There are lots of ropes on GotoBermuda and sometimes the five got a bit confused about which rope went where. Andrew was looking now at one rope called ‘The sheet’. The sheet attached to the sail at something called ‘the clew’ and the five used it to control the sail. “Did I put it correctly?” mused Andrew...finally he remembered some wise words that the Skipper once told him …. “Ah yes, I need to pick up the sheet and make sure it doesn’t go under any other ropes.” He picked up the rope and walked all round the boat, making sure it ran free and wouldn’t get tangled up.

By now Mike and Thierry had the sail ready and the front hatch open. “Ready to go?” Called Thierry from below. “Yes, yes, called Freddie” and they all set too, heaving and pushing with all their might to get the sail out of the locker.

It was heavy and they struggled until Freddie started calling “Two, Six, HEAVE” and when she called heave, they all pulled as hard as they could. “They used that call to get canons reloaded on Navy Frigates” said Freddie. The others all wondered how it was that Freddie knew so much about canon warfare, but didn’t like to ask. She knew a lot of things – especially about getting things done efficiently.

Finally, the sail was out on the deck and ready to hoist with all the ropes attached.

“Let's have a cup of Tea” said Yvette...but the others all agreed they should get sailing first so they hooked up all the lines. Andrew asked Thierry to go and helm, because he was really good at that. Freddie was on the long rope called a ‘halyard’ that attached the sail to the mast because she loved being at the bow of the boat and pulling ropes. Yvette and Mike were in the cockpit managing the lines and Andrew put himself on the grinder so he could help lift the heavy sail.

“Are we all ready!”, called Andrew...”Yes, Yes, YES” the other four shouted excitedly. Freddie started hauling on the halyard with all her strength and Yvette and Mike fed the lines perfectly while Andrew started spinning the Grinder. “Faster, faster!” he called, his arms whirling around in a terrific swirl as the sail soared up the mast.

Once it reached the top, Mike pulled on the sheet and the sail popped open with a clack. Filling with wind, GotoBermuda leapt forward with white spray appearing beneath her bow. Thierry, carefully steered the boat onto the course he had put into the computer and off they went.

All five were laughing excitedly as GotoBermuda picked up speed - “10kts” shouted Thierry and everyone clapped. Yvette went down to put the kettle on as they all felt pooped after all the work and were in need of a cup of tea.

“I know” said Andrew. Lets see who can helm the fastest and so they all took turns on their way to Subic Bay – each one going quicker than the last and GotoBermuda sliced her way merrily onwards to their destination. “I think we might be going faster than anyone has ever sailed before” said Andrew as they passed 15kts.

Down below, in his bunk, the Skipper opened an eye and checked his instruments. He wondered if he should go and show them just how quickly GotoBermuda could really go – that WOULD surprise the five of Shelly Bay…. He rolled his eyes at the sound of their merriment, and decided not to spoil their fun just yet. After all, they were all off on the adventure of their lives and there was still plenty of time for records to be broken.

Up on deck, the five watched the sun slip beneath the horizon. “Isn’t this fun!” said Freddie as they sipped their tea. “Jolly well is”, they all agreed as they sailed into the sunset and onto the adventures that the next day might bring.

THE END (of the Beginning)