It was here, it was finally here! The day some of us had been waiting nearly ten years for, and others only ten months. Excitement on the boat was evident, there was a buzz in the air, and dare I say even a few nerves. Although it was only a few days at sea before London, Tuesday marked the beginning of what will be a mammoth journey for all eleven of these spectacular racing yachts. Gosport Marina will lie quietly dormant, empty of the Clipper Race fleet for the next year, eagerly awaiting their return in late August 2020.

Aboard Punta del Este there were still last minute preparations before we slipped lines a little after 10am. It was like a busy beehive, each of us going about our own little tasks – netting to be secured, sails to be moved, a final scrub of the deck...had to look good for the photos!

Our time had come, we slipped lines and bid farewell to Gosport, to the sounds of a cheering pontoon and the accolades of our fellow Clipper Race yachts. First order of business was to hoist a shining new mainsail, complete with the now well known Punta del Este Sun!

We had been given the honour of leading the fleet for the ‘racing’ photoshoot, to be taken from a helicopter later that day, so we set about getting our headsails in place and making sure we all looked the part – matching outfits in our yellow salopettes and Clipper Race crew softshell jackets. We certainly looked the part, it was a crisp look, but not much good if you’re up the bow! As we sailed along, conditions got choppy in the channel, and it wasn't long before that delightful wet stuff we’ll all grow to love or hate, began crashing over our bow. I was wet and I hadn’t planned for it. Shoes soaked, jacket drenched, and all I could do is ride it out as the water trickled down the inside of my salopettes! But hey ho, it’s what we’d signed up for and I’m pretty confident that we’ll see some awesome shots of Punta del Este leading from the front!

Photoshoot done and we were left to our own devices as a boat, with the next rendezvous set for Southend-on Sea, a little under 24 hours later.

The sea state was choppy, with a good deal of swell, and it wasn’t long before some of the crew, including myself, fell foul to the dreaded seasickness. Ginger biscuits were on hand to try and help, along with a firm position behind the helm (it tends to be the best place to regain balance, and worse case offload over the back!) As we continued to sail into the evening we made it into calmer waters, which brought calmer winds – cue the first hoist of our lovely new code one spinnaker! It went up like a dream, billowing into life, leaving some crew in awe of its enormity (having not experienced the spinnaker before). Into the night we sailed, spinnaker still flying and spirits high….until near disaster struck! During what should have been a simple gybe, we managed to wrap the spinnaker around the forestay, every sailor’s worst nightmare! After some quick thinking and adjustments from our Skipper Jeronimo, who stayed relatively calm as always, we managed to free the spinnaker and let out a big sigh of relief! That could have gone a lot worse, but we were determined not to damage our nice new spinnaker!!

Wednesday brought with it a glorious sunrise and some lovely warm weather, but unfortunately left us with hardly any wind. So with the watches just changing it was perfect timing for a man overboard drill to liven things up! With very little instruction from the Skipper, we pounced into action and went about recovering Bob from the chilly waters of the Channel. With the drill complete we sat as a crew for a debrief, highlighting areas for learning, but also acknowledging how far most of us have come from when we did our very first MOB way back on Level 1!

As if a MOB drill wasn’t enough excitement in itself, we were then shortly joined by a 21st member of crew, who we named Pablo….Pablo the pigeon! Pablo arrived on deck after a slightly sketchy landing, which ended up in him coming face to face with our boom! A little shaken he took cover behind our jammers to recuperate after his little ordeal. With the offering of food and water, we managed to coax him out, which allowed us to take a look at his tags. Yes that’s right, Pablo was a racing pigeon! With a little online research I managed to establish that Pablo had flown in from his home in South Wales and was possibly a little lost. We notified the club from where he came from and left Pablo to recover in his own time. 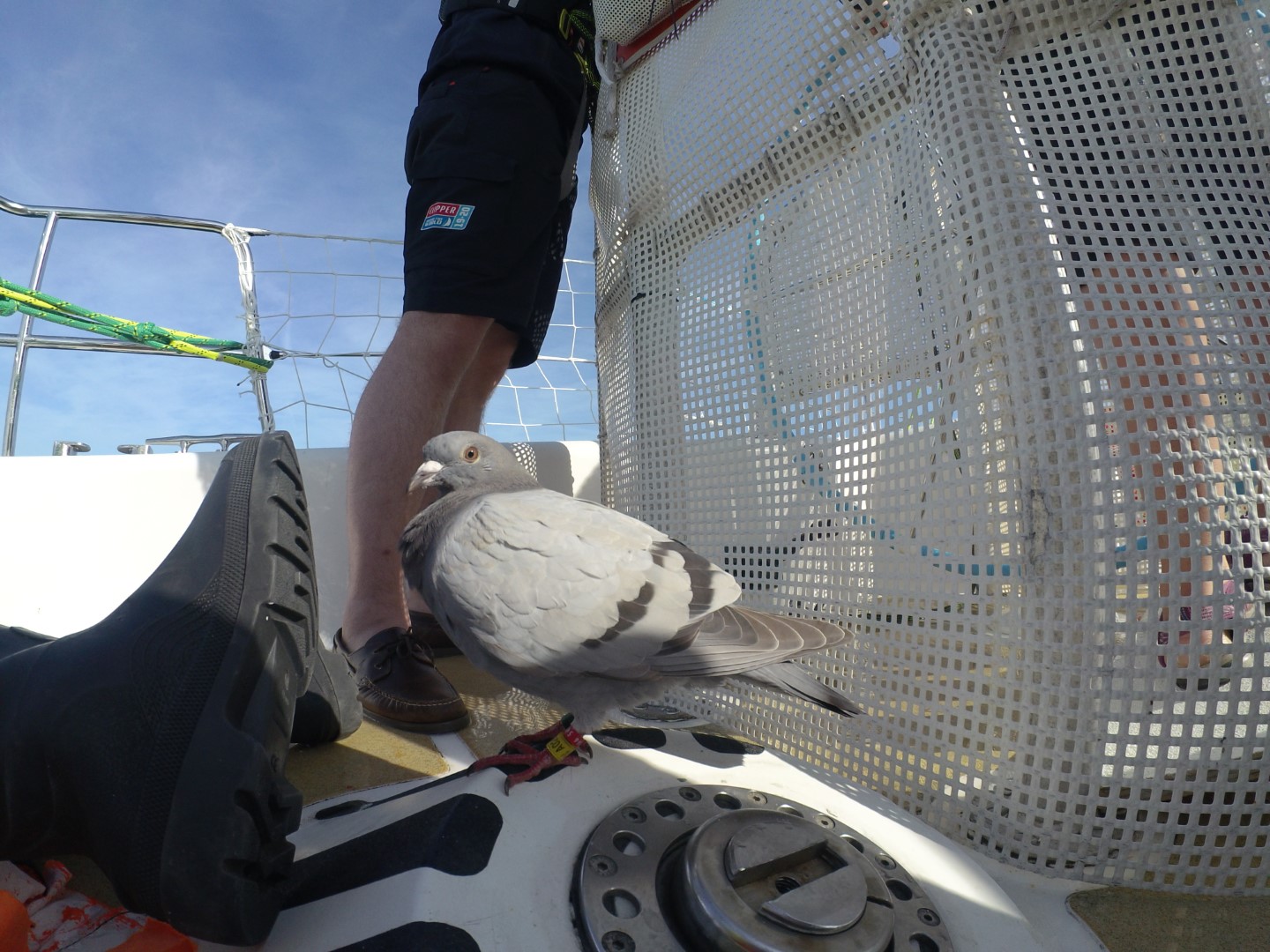 With the wind practically non existent, we motored the remaining miles into Southend-on-Sea, arriving mid-afternoon on Wednesday. After setting up anchor, there was time to potter around the boat completing some final little tasks, before taking to our bunks for a good nights’ sleep.

Thursday arrived and the excitement was clearly evident as we prepared the boat ready to motor in convoy up the Thames. The experience of coming into London was breathtaking, something that won’t be forgotten in a hurry. We were all on deck, once again dressed to impress in our golden salopettes and crew jackets. The cheers were loud, the banners were flying, it almost felt like we were famous! Our time finally came and we entered the dock in style, with our team song bellowing out the dockside speakers.

We were here, the boat was ready, now time to enjoy the week of festivities before the race!

PS. in case you were wondering, turns out Pablo had been missing for two weeks… let’s hope the little fella finds his way home!