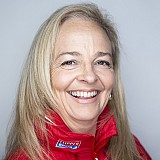 This blog is dedicated to the staff, families and especially all the children of St Joseph’s and St Gregory’s Primary in Bedford.

It seems such a long time ago since I left at half term and I realised yesterday that the Easter Holidays are fast approaching. For two weeks whilst you are on holiday I will be working hard with my teammates to make our boat go fast and safe across the Pacific.

I hope you have been able to follow Qingdao’s progress during the last two weeks – it has been slow as we have had to sail upwind! This is not as quick for the boat and much more uncomfortable for the crew! The boat has been heeled over, which means we are living life at an angle of about 45 degrees. It takes a lot of energy to move around the boat below deck as the floor is tilted and often quite slippery. Imagine trying to stand on a slide and brushing your teeth or getting dressed!

We have sailed about 800 miles so far and have more than 5000nm to go. Over the last few days we have reached the southern tip of Japan and we will be following the coastline up towards Tokyo before heading across the Pacific Ocean – have a look on the map and track the boat from Subic Bay in the Philippines to where we are now. We cannot see the coastline; just imagine it out there to the north of us. On clear days like today, when standing on the deck, you can see the entire circumference of the earth – 360 degrees of horizon and sea as far as you can see! Occasionally, we see a container ship passing, carrying goods from one country to another. The on-deck watch play a game guessing the length of the ship and then checking on our boat’s computer (AIS) to see who is closer. The largest ship we have seen so far was over 400 metres long – can you measure that out along the path and see how long it was? Our boat is only 23 metres long in comparison! We also try to spot other Clipper Race yachts and hope we are ahead of them – we don’t always know what the race positions are. Several times now since Race Start we have had dolphins swimming alongside our boat – they are amazing! So much faster than us. We also had a small bird fly with us for a while and eventually land on deck. It looked tired. We thought it might have been blown off course and lost its way! We tried offering it water, but after a short rest it continued on its way.

The weather has started to change. It was very hot to start with and we sailed in shorts and t-shirts (and our lifejacket of course!). Slowly the nights have grown cooler and most crew are wearing their yellow ‘foulie’ bottoms and tops with layers underneath. Boots have replaced deck shoes and woolly hats, sun caps! It is starting to feel like the North Pacific with more swell and bigger winds. We are currently on storm alert and are expecting winds of about 30 knots in the next day or so – we are making sure everything is stored securely to stop things flying around when the boat is being rocked by the weather and sea.

I hope you’ve had a good half term, worked hard and been kind to each other. Sing the ‘Lighthouse Song’ and remember me and my crew mates out here at sea. Enjoy your holiday, check out Qingdao’s progress online if you can and I’ll catch up with you again when you are back and we reach Seattle!