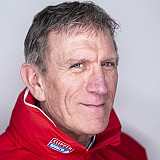 Hello All From Qingdao Crew, (Dave and Kevin) “Dolphins”, the shout goes out. However, strangely not as enthusiastic response as Donna (Mother of the day) when waking our watch with “come on, the finish line is in sight and fresh crusty bread is awaiting”. Once up, it was clear the finish line was a bit closer than yesterday but still eight hours away and it was a way of selling breakfast, albeit the porridge did not fly off the shelf as much as the fresh orange segments, nuts and dried apricots. So on deck for another watch and its 0800 hours, blue sky, 21 degrees and we are doing 7.8 knots. Then Unicef appeared on the horizon. The boat we knew was there, but what was their plan? We were neck and neck but with different tactics. Skip is going through as many sail combinations and scenarios that you could possibly imagine to give us the extra advantage. News in: in the sprint we were confident we had done well, but the reality was that, whilst we had done well compared to the other four boats in the lead pack, the ones behind were able to benefit from strong winds all the way through and we came forth, by four minutes so sadly lost out on points. George’s father, on Unicef, continued to close us down but, 12 miles to the mark, we have our Code 1 kite up and they are on a Yankee and staysail combination, but which of us has the best combination and angle?????

Lunch was, yet again, an at sea bistro….sat in the sun, “prepare to tack, runner back” and the race is still on mirroring Unicef tack for tack. Best wishes to you all from Kevin.

30 miles to go to the finish and we have a small advantage over Unicef, we letterbox the Code 1 to Yankee and staysail, to get upwind to the mark, the wind dies, it drops and wind seeker goes up, wind again, Yankee again, its all getting tense. Then we hit a wind hole and drift around for a bit, phew a breath of wind, and we start to move. Windseeker, back to Yankee, we are currently ten miles out and ahead of Unicef, who are further out, further from the finish but sailing slightly faster from a different direction. It’s going to be a close right to the finish!

And finally, Donna, how has your day been as Mother? You have watched the sailing soap opera unfold via occasional glimpses up the companionway, and the Qingdao crew have eaten like royalty again.