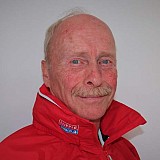 Well, it's my turn for the blog, but first, a riddle to complete. How many Clipper Race mates does it take to transport a cup of coffee, from the galley to the port helm station? Port because starboard has collapsed to an IKEA you build project, more on that later.

Day 21 was welcomed with following sea's/sunshine and blue sea as of the last couple with more to come. Ever thought much about SUPERSTITION, well it does have a deep resonance with the bounding main, likely due to the fact that those who don't, don't have stories to tell. Very early on Leg 3 Race (Southern Ocean Cape Town to Fremantle), I heard that the Southern Ocean as being very benign and would likely not reach the bar set by the Southern Atlantic Ocean. Well, I'll tell ya, King Neptune heard those words and released the WIND servants, waves w/long fetches developing unbelievable powers with the wind in the mix also. On one day CV22 was caught in the mix, taking a broadside, possibly aft of beam a couple of wave sets, which enveloped poor Seattle. The starboard helm was in shambles as well as all stored items in bunks/bins, even the companion spray cover will no longer slide fwd for easier access to companion steps. Currently, we're trying to evade another trap by the WIND servants (wind hole) which would impact our progress to the finish line, the battle is on. As for superstition why did all commercial/private avoid leaving a harbour on Fridays, I always thought it was because they needed more crew, so they waited till the bars closed and found any sailor willing or not to join, then cast off lines the next morning. Got the answer to the riddle? Well, it's 14, to not spill a drop at 43 degrees.