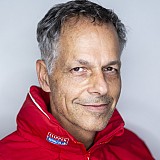 Our avid readers will have noted that our blog topics range from the practical (why do the pedestal gearbox covers have wing nuts that eat our deck shoes and feet) to the supremely bizarre (the zombie apocalypse). Here is a brief stream of consciousness to add to the mix.

This morning I dug up a plasticised sheet of paper from my waterproof bag. One of our daughters gave it to me at Amsterdam airport as I left for Airlie Beach. It has five groovy stick figures with the jolly faces of my dear wife Denise and our children Folkert, Anne, Dorith and Juliette and a message of encouragement from each. On the other side is a picture of the cover of a children’s book, with a brave dog in yellow foulies holding binoculars on the bow of a wooden sailing boat in a storm. The Sailor Dog was my favourite book during my early school days and still is on the top shelf along with the works of Dostoyevsky and Kinky Friedman. The book has a rhyme that begins with ‘my name is Skipper and I sail on a clipper’.

It is the story of a scruffy dog who wants to discover the world and decides that sailing is the way to do this. He builds a rugged wooden boat and sets off into the unknown. There are images of big seas and lashing rain, and then the warm glow of an oil lamp in the cabin where our adventurer sleeps in a simple bunk, with his foulies on a hook. One unfortunate day he runs aground in a storm and his boat is lost. He finds the tool box and builds a hut from the remains of his boat, and then a new boat. This is a calm and resourceful dog who never gives up. One day he arrives in a foreign land where the sun shines, an oriental place with palm trees and minarets and people in robes with colourful hats. He finds a tailor and buys himself a white suit with brass buttons and a white hat, looking very dashing and cosmopolitan. As a young boy this is what I wanted. To see the world and be a scruffy dog with a plan.

On board there is plenty of time to think about life, the universe and everything. I look back and the parallels with the story of the Sailor Dog made me smile. Sailing has been a passion since childhood. I’m an engineer and can build stuff. We have lived in eight different countries including Oman and Qatar where people wear robes and colourful headscarves. I have yellow foulies and sail on a Clipper. And as I look in the mirror I have a distinct scruffy dog look. A happy scruffy dog.

We enjoyed some great sailing on our way to the Luzon straits. At more than 20 or 25 knots true wind the boat comes alive, powering through the waves downwind with the Code 3 or thundering along close hauled. Sailing hard at an angle everything gets knocked around, gravity comes from the walls in sudden bursts and simple tasks become quite a challenge. Life is good on board, spirits are high, we work hard and play hard. There are many small pleasures like sitting at the back of the boat to wash a few toxic shirts. Having a mega nut bar before Mike Miller gets his hands on the snack pack. A midnight coffee with that distinctive first taste of salt on the cup. I think this could become a thing, coffee with a salt rim like a good frozen margarita.

We had an unofficial poll on the things we miss most on board. There are some obvious things like having a shower, a cold beer or going for a run. The less obvious one that found general consensus is getting dry air on your bum. After a month one starts to see and feel the effects of permanently wet buttocks and it’s not pretty. We’re now considering how best to convert one of the helming stations into a modesty area where one can give one’s derrière a good airing without causing undue distraction.

We’re now back in light winds. Some 200 miles to go to Subic Bay which could take two days or perhaps forever. I want to be there on the 16th February. It’s my birthday and it’s a big round number. And more than anything because Denise and two of our daughters are coming over and I want to give them a big scruffy dog hug.