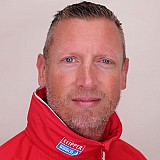 We’re about 700 miles from the Subic Bay finish line. Ish. We sat in our own private little windhole for three hours yesterday which was nice, and sadly it let Qingdao get away from us again. We took five miles back out of them this morning so it’s still very much all to play for and nothing is taken for granted just yet.

This race has been the best so far for many of us I think. We’ve had an intensity that hasn’t been present before. We lost a few crew from the last race for various reasons but have had some great responses and the boat feels very, very different to me from the early legs. We’re not quite there yet, we’re still making mistakes in 15 knots of wind, which is going to be amplified when that becomes 150 knots. But it feels as if we are heading in the right direction at least.

Sarah Hill has been a fantastic presence, bringing calm authority to one of the watches, and the leggers in particular have gained a lot from her teaching. Bruce has owned the weather updates and Michiel’s experience of trim in particular has meant conversations are beginning to be more professional and racing focused. We had to do something to stop Danny talking about poo bags basically.

In a confined space there are only so many voices that can be heard, but this current crew has a lot of respect for each other and everyone is pulling together and having their say.

Many of us were struck down by a virus the last few days but every single person has stepped up to cover another’s job, Angie being the ultimate star for mothering over lunch whilst Sarah and I slept off our exhaustion after kite packing in the middle of the night, before making everyone breakfast.

Ian got us off to a blinder over the start line last week. Our brief lead largely evaporated as another windhole reset the whole fleet, but what it did do was give us confidence that the boat is fast and the crew can be competitive. I have fingers crossed that we can maintain this back into Subic Bay and maybe we’ll get a little bit of luck as I feel this crew genuinely deserves a podium just now. Thanks Race 7 team, it’s been fun and you’ve been a blast! Andrew