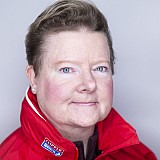 Excuse me if this is a rather short blog, but today has involved a healthy amount of gybes, sail changes kite packs, and cleaning bilges all whilst heavily heeled over and crashing through waves at 13-15kts - very satisfying but definitely tiring. The brief respite I got involved sitting on the high side before getting unceremoniously soaked as Ian surfed down a wave, chuckling and whooping as we went. All good fun and I admit it was thrilling but then I was thoroughly drenched 15 minutes before watch changeover and dinner. As I write this blog dry clothes and my tilted bunk are calling.

Before I head off, the big news of the day was our decision to go for both Scoring Gates, gybing through one to make the other as we slalomed our way down the course. We were pipped to both (JUST!) by Qingdao. Upon closing in on the second gate we were so close, we could see their crew on deck as they wrapped their Code 3, made an impressive recovery, then exploded their Code 2, but still managed to make it over the line a few short minutes ahead of us. Their sail disaster response time was fantastic. Clearly a great team and hats off to them. Still... 4 points from two gates is awesome for us and we’re still on the hunt for line honors. Some ‘inside’ information for our supporters (obviously do not share with the rest of the fleet).

Over the past several days we have been finding another gear with several modifications from our on board engineers and sailing gurus to improve performance. Using formulas with derivatives, friction coefficients, fluid dynamics, and taking into consideration cohesion entropy, we have found the following: