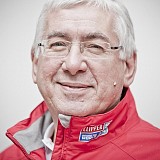 Based at the Cruising Yacht Club of Australia, home of the Rolex Sydney Hobart Yacht Race, we have enjoyed having Sydney as our home for two weeks since our Albany arrival. We have been able to witness and be part of the build up to this great race with the steady arrival of television crews from around the world and people being interviewed in the race village. It was good to see Wendy Tuck getting star attention at her home club representing the Clipper 70 fleet.

8.00am start for race day on the 26th December and I am attending the compulsory final RSHYR weather briefing with Martin our skipper. The room is full and the media are in full swing. We are to expect a beat out of the harbour but by the evening of the first night the wind to swing round from the north to the south with a full Southerly Buster in excess of 50 knots through the night!

We slip lines at 10.00am and despite the large amount of boat movements in the harbour are to have a full Parade of Sail past the Bridge and Opera House. Unicef has the privilege of leading the parade and our own escort from the harbour service comes alongside flashing blue and red lights, A friendly face leans out and asks if we have any instructions as he will keep us a clear path through the many water taxis and spectator boats streaming out. We pass right up to the Harbour Bridge on the north side and then cross and parade past the Opera House lined with people waving, a marvellous sight.

Heading on up the harbour we have a start sequence which involves passing close enough to our committee boat displaying our storm sails raised and close enough to have a conversation with a blazer clad official to confirm he has recorded us and how many people we have on board. This is bedlam with many other boats trying to do the same. Just to make life interesting we jam our throttle, avoiding drifting down onto him and have to pass again.

The start line of the Sydney Hobart is unbelievable, three close start lines with all boats starting at the same time, constrained on both sides by lines of spectator boats nose to tail all the way up the course, and then well over 100 boats beating up to the first mark some two miles up the Harbour. How there were not more collisions is a mystery with many large boats and much lighter small boats soon completely interspersed. At last we are clear of Sydney Heads and can set a kite running south and the stress levels can reduce.

This is short lived however as a broken sheet forces a drop and on the re hoist the tack line blows! Eventually sorted, we head for the night of the big blow! It certainly felt like the 60 knots we have been through previously. Huge waves and sailing through the darkness just with the windex, course over ground reading and tell tales to follow. For the Clipper 70 crews, this is conditions they have met before though we hear a large number of yachts have retired. We are all now through this and battling with the different problems of light airs heading towards the Tasman coast in the sunshine. Who has called the high pressure system correctly? This race still has many twists and turns to unfold before we cross the finish line some miles up the Derwent River in Hobart!

Finally a big thank you to all the people at UNICEF Australia who came to the boat, welcomed us at their functions and made our stopover so welcoming and enjoyable in Sydney. You are doing great work.

Best wishes and a Happy New Year to all our families, crew and supporters.