Sir Robin Knox-Johnston is back aboard his open 60 yacht Grey Power, preparing for his next competitive test – the 2,800 nautical mile Transatlantic Race from Newport, Rhode Island, to Cowes, Isle of Wight, UK which starts from 28 June 2015.

This time however he will not be alone as he is joined by three friends, including Commander Dilip Donde (pictured) from the Indian Navy, who became the first Indian to circumnavigate the world singlehanded in 2010, and two-time Vendee Globe competitor Bernard Gallay of France who joined Sir Robin in 1982 on an Atlantic crossing aboard Sea Falcon.

Since picking up Grey Power up in Grenada last month, where it had been looked after since the Route du Rhum, the group has just completed a short pit-stop in Bermuda, home of the America’s Cup 2017, for repairs.

There they enjoyed a chance meeting with Neal Peterson, a South African circumnavigator who completed the Around Alone race in 1999, and reminisced about their shared experiences. Watch the video of them together here.

Sir Robin and his Grey Power crew departed Bermuda yesterday and are now making their way to Cape Cod. 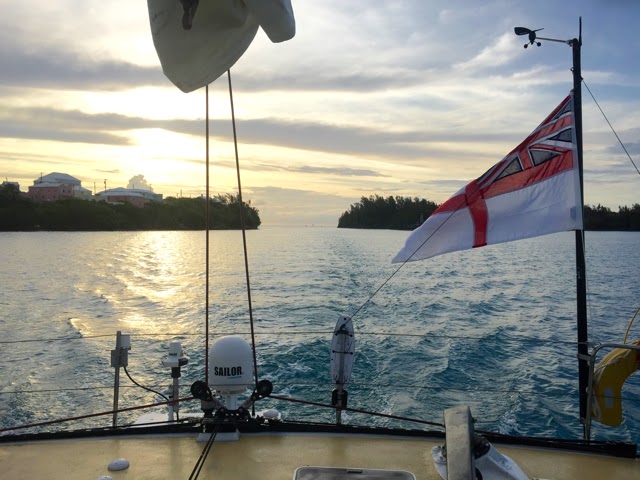 The latest update is as follows:

“Grey Power is back at sea. For the second time we have left port on a Monday. This time after a four night stay in Bermuda. Our memories are of Craig below the St Georges dinghy club welcoming us with his coffee and seeing us off again with a final cupper. Thanks Craig.

Customs and immigrations both on arrival and departure were welcoming and easy to deal with and our stay was overall greatly facilitated by Sandra Suaraz and her son Mark - thanks Mark for the tools for the repairs!!

As we left harbour, after recalibrating our port autopilot, we were duly seen off by Neal Peterson who came to wish us a good crossing from his dinghy. Neal is awaiting the arrival of the Newport to Bermuda single handed race (we might cross them tonight!) to race back two handed. Good luck to him!

So here we are back at sea on our way to Cape Cod. At the time of writing we are battling 3 knots of true wind from direction unsure and this is reflected in our boat speed of around 1.4 knots. Our beards will be very long if we don't improve our speed and our cigarettes stock will fast dwindle due to regular wind direction checks.

On the plus side, our freezer box is operational on this first night so we felt duty bound to take our daily citrus intake with the remaining cool tonic water and of course associated tonic! Pot mess followed to give the team energy for what looks like a long night away.

To give you an idea, since tasting our first G&T to finishing supper (two and a half hour), we have completed 1.6 nautical miles! Yes, Josh is thinking about re-instating cigarette rationing!”

The Transatlantic Race starts from June 28, at Newport’s Castle Hill Light and finishes in Cowes on the Isle of Wight. The race record was set during the last edition in 2011 by George David’s Rambler which finished in 6 days, 22 hours, 8 minutes and 2 seconds.

In support of 8 June’s international World Oceans Day, an official United Nations designated day, we’re celebrating our love of ocean adventuring and ever-growing passion for discovering our beautiful Blue Planet. 72 per cent of the world’s surface is covered by water so…

Pavels Saikins, 28, is a former volleyball player who now works as a photographer on cruise ships. Hailing from Daugavpils, he is also our first ever Latvian crew member and has signed up to take on the mighty Pacific Ocean in Leg 6 of the…

This week we catch up with Minnesota chef Robert, who in less than 93 days’ time will be at the…