The next stage of the Clipper Race got underway at midday local time (1700 UTC) today, after an offshore Le Mans Start. The second part of Leg 7: The USA Coast-to-Coast is aptly named Race 12: Go To Bermuda. The 1410nm race will see the fleet sail from the Panama Approaches, through the Caribbean and to first time Host Port, Bermuda.

Following a 250nm motor from Shelter Bay Marina on the Atlantic Coast of Panama, the fleet lined up for a Le Mans Start, coordinated by Unicef Skipper Ian Wiggin. The windward yacht was Race 11 winner, Ha Long Bay, Viet Nam and the leeward GoToBermuda. A Le Mans Start is certainly an impressive sight, with the whole fleet all raising sails at the same time. With the sound of 22 headsails being hoisted and many winches spinning, the teams must keep focussed on their own game plan and try to push ahead. 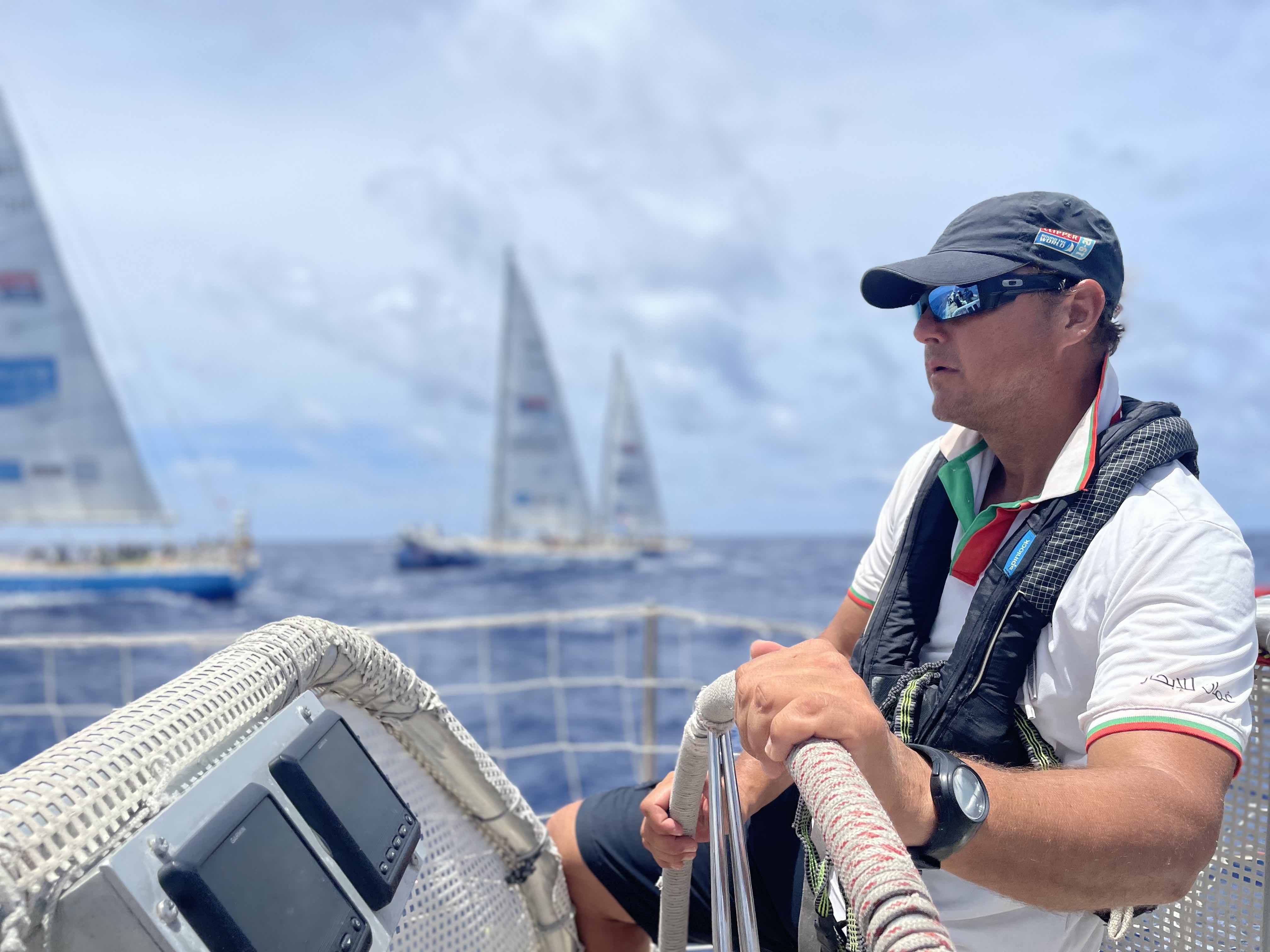 Lead Skipper for the Le Mans Start, Ian Wiggin, had a perfect vantage point from the centre of the line up. On today’s start he said: “The Clipper Race Committee decided on this location due to light and fickle winds that extended well off the Panama coast. The transit to the rendezvous point allowed the teams time to rehearse manoeuvres and tweak their racing machines for what promises to be an intense race. As always compulsory safety exercises were conducted during this time.

“This race promises to be epic. The race distance is 1410nm. Furthermore, three teams have played their Joker (double points available) and Qingdao is back in the fold. In my opinion this is a very hard race to win as the weather patterns are unseasonal and there are plenty of tactical routing options through the Caribbean islands. The forecast suggests around 12-18 knots from the south east for the first 300nm sprint north to Jamaica.

“Leading the fleet off the start was Ha Long Bay, Viet Nam. Qingdao, WTC Logistics and Zhuhai hoisted spinnakers very quickly after the start sequence and have opted for the most direct course down the rhumb line. To windward was Punta del Este who was sailing at a slightly higher angle. Unicef had an average start caused by a rogue sail tie on the Yankee 2. This led to a sail in the water and lost miles.

“It is great to get the fleet away clean and Race 12 is now well and truly underway! A special mention to the crew of Qingdao who are able to rejoin the fleet after an epic endeavour. Tenacity truly describes the 'never give up' attitude of this team, who has overcome numerous challenges on the way to rejoining us. I am very proud to be racing with such a professional and committed team. The Clipper Race is tough, but its story of triumph over adversity is truly next level. Quite the achievement by all involved here, not forgetting the Race Office and Maintenance Team who work tirelessly behind the scenes. 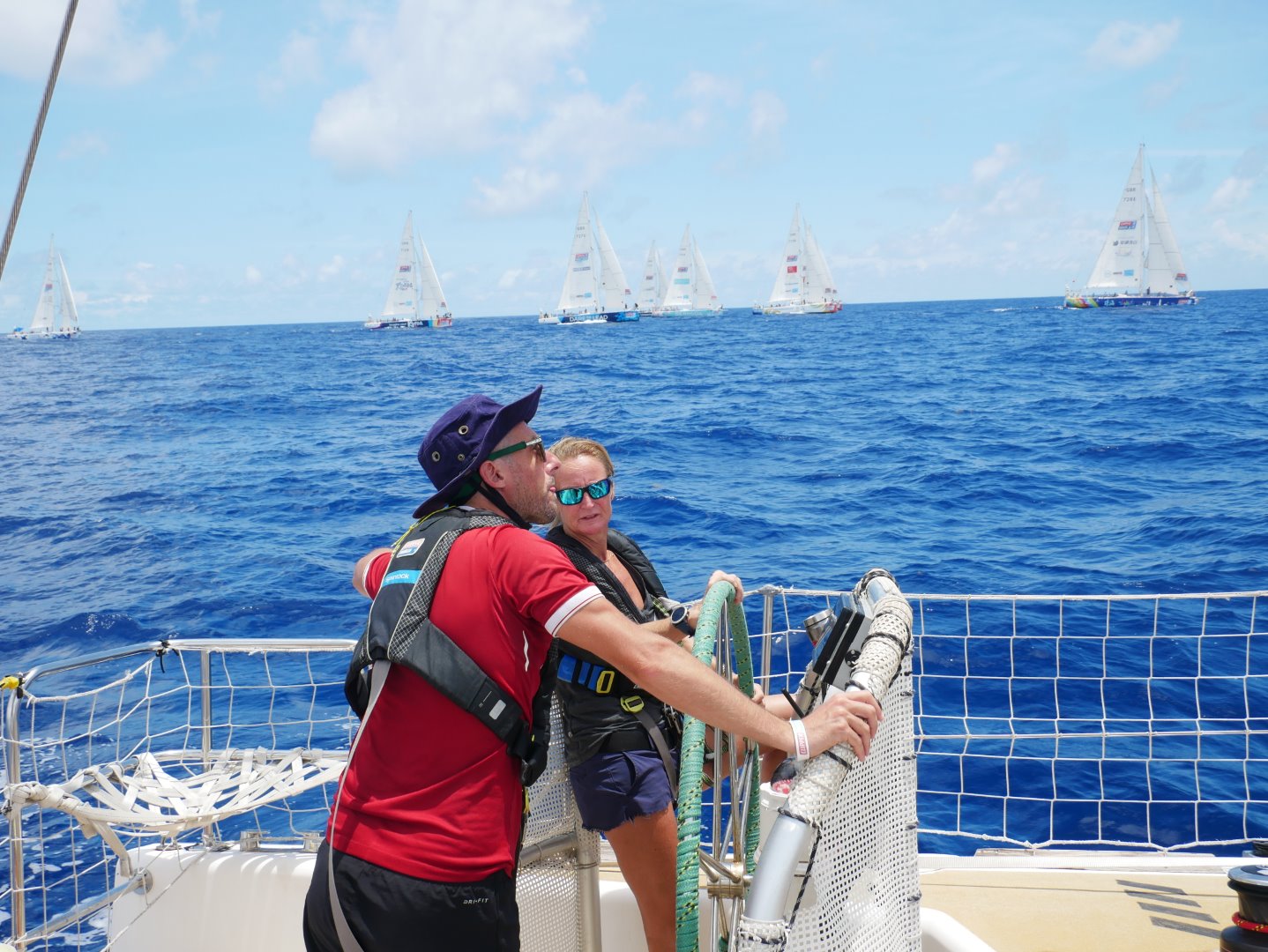 The teams have all sent in reports of the Le Mans Start action:

“A very well run Le Mans Start by Unicef, a clean getaway by all boats, and some interesting tactics with a range of sail choice across the fleet. The coded boats headed straight for the next mark and the fleet chose to change to a Yankee 1 at the first available opportunity after 10 minutes. There were frantic sail changes whilst the fleet dropped the Yankee 2s in favour of the larger Yankee 1, followed by a quite large range of course options across the fleet, setting up an interesting couple of days ahead on route to the Windward Passage.”

“Race 12 in Leg 7 is on! We just completed a Le Mans Start and we are on our way to Bermuda.

“The Le Mans Start was a battle in close quarters as the fleet was packed in a tight line. This time Punta del Este struggled to get clean air as we were one of the leeward boats and couldn't generate enough speed to get away. Something needed to be done. As soon as we were allowed to change course we tightened the sails and went to windward looking for the fresh breeze away from other boats' wind turbulence. It’s as important to have a good start as it is being able to recover from a bad one. We continue gaining speed on our way to Bermuda.”

“Here we go on a little race for our little boat! We were drawn out of a hat as the windward yacht which was lucky as it was a lovely position to watch the fleet line up, and a good job from Ian to get this rabble of boats into what resembled a straight line. We have opted for Yankee 1 staysail and full main but the wind has veered and is due to drop so we are going with our windseeker.”

"What a great day for a Le Mans Start! The sun is shining, around 10 knots of wind from more or less the right direction and 11 boats ready to race once more.

“The start went smoothly. Well done Ian! After the mandatory 10 minutes you could see how eager everybody was with various sail changes everywhere. Some went Yankee 1, we, Zhuhai and Qingdao went spinnaker. Time will tell what will work out best."

“The crew really pulled it together today and we had the best start so far! Maybe the spirited and very loud battle cry whilst lining up did the trick! Bermuda, we hope you're ready for us!”

"Allotted the gooseberry position, in-between Seattle and Dare To Lead, our start was always going to be exciting. A good job getting the Y1 up shortly after the le mans 10mins agreed sail plan.

"Who knows...who knows... where the west wind blows… bring on the West Indies chilling!"

“Race 12: Go To Bermuda is go! We are off, after a well coordinated Le Mans Start from Ian on Unicef, thank you. Kraken (watch) had spent much of the morning changing the head sails that were on deck, due to my indecisiveness, caused by the forecast not matching the forecast and numerous wind shifts. We settled on a plan and now we are heading towards our chosen waypoint, under the Yankee 1, which was set after a slick racing head sail change from the Yankee 2 the moment we were legally allowed too. So now it's a case of trim and helming as the wind appears to be easing off.”

“What a fantastic start for the good ship Visit Sanya, China. Our crew work was super slick, so the headsails went up really fast and we were quickly one of the leading boats. As soon as the first 10 minutes was up and we were allowed to change sails, and course we switched up to the bigger Yankee 1. 20 minutes later, we are still amongst the leaders. We switched to the Code 1 spinnaker and are charging (if one can charge, in 7 knots of wind) towards Bermuda. Jai Yo Sanya."

“I have never done a Le Mans Start which started with this many sails on the deck! We had Yankee 2 ready to hoist as required and under that the Code 1 and Yankee 1 and staysail on the side. To be honest, with this many sails I was expecting some form of utter carnage to ensue however it all went surprisingly well with the staysail and Yankee 2 coming down, Code 1 up.

“Then, just to try and prove that Zhuhai has officially gone into sport mode (or at least attempting to) we put the staysail back up again. so it's so far so good on board the good ship Kevin but it's a long race and many, many, many things can happen along the way so we just have to do our best really!

“All the best from the crew, Patrick and myself”

“Positioned on the leeward end of the line, between WTC Logistics and GoToBermuda, first seemed like a disadvantage but when Chris commented that it may give us the opportunity for a code to be hoisted, its benefits showed. The decision to hoist the code was made 6 minutes into the 10 minutes window after the race start and we set to work.

Having two options for the hoist - sailing faster than WTC Logistics or slower and going behind, we managed to pull ahead and had a speed hoist of our Code 3.”

With some nice, reaching conditions forecast, the fleet can expect some exciting sailing. Keep an eye on the Race Viewer to watch the action unfold. The teams are expected to cross the Finish Line between 11-13 June after which the crew will receive a warm Bermudan welcome and have some time to explore the island’s pink beaches, laid back vibes and enjoy some much needed R and R.

For the crew competing in the Clipper Round the World Yacht Race, the transit through the Panama Canal is a…