The Le Mans Start for Race 14: LegenDerry Finale began this morning at 0800LT. The line up was organised by Dan Jones, Skipper of WTC Logistics who set the sail plan based on the conditions.

Hear from our professionals on board each team, on how the second race of Leg 8 got underway. 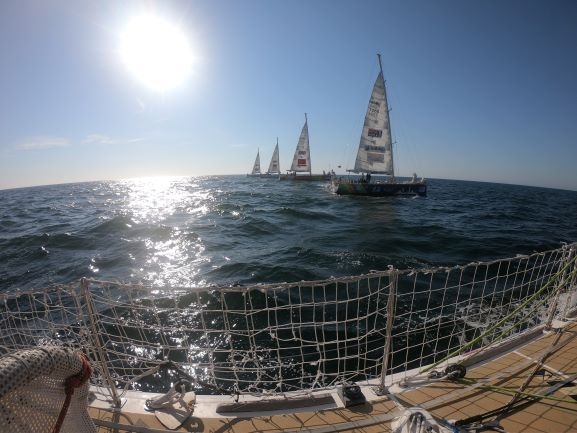 This morning we had a cracking sunrise and it was a well organised start. We now have our kite up with a wicked view of the entire fleet to leeward. Not a yankee in sight which is magic. Bon voyage everyone and see you in Derry~Londonderry! 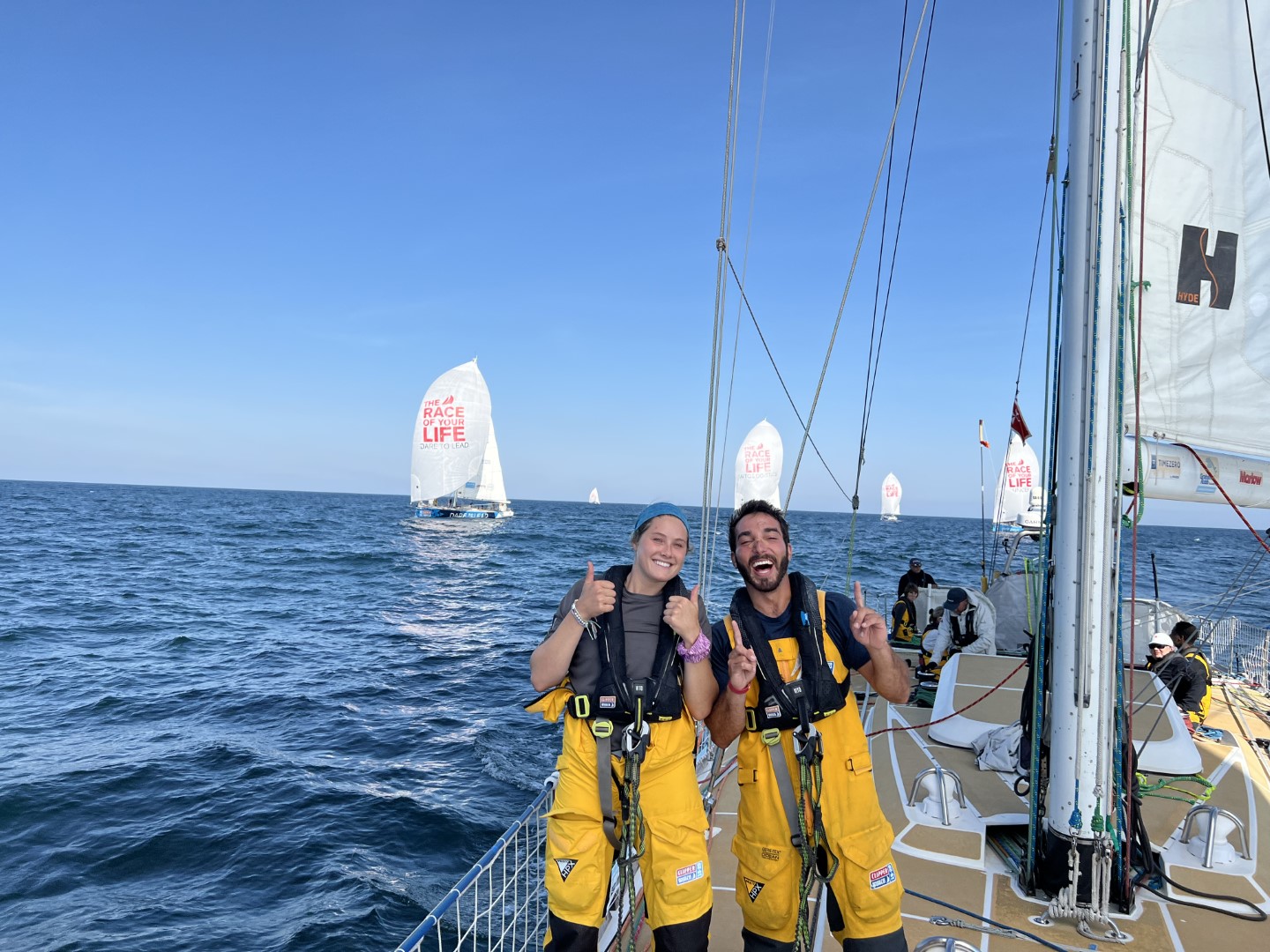 "GoToBermuda had a brilliant start off the line with a clean yankee and staysail hoist. The crew then immediately transitioned and prepared to shake the reef followed by a further transition into hoisting the Code 1. Within such a short space of time the boat looked like a snakes nest, however this allowed the boat to be fast out of the gate and pull out in front of the fleet.

Thanks to Dan on WTC Logistics for a great start.”

“A beautiful sunny morning with a F4 breeze, saw a well organised Le Mans Start by Dan from WTC Logistics. The moment we reached the 10 minute time-frame, which allowed us to change sail plan and course, #1 (Hannah) bore away. We simultaneously shook out the reef, dropped the stay-sail, fixed the fore-guys and rolled straight into a kite hoist. Lots going on, it wasn’t faultless, but showed promise. The start has certainly help settle some pre match nerves on board – mine included.”

“As the sun rose this morning we were greeted by the sight of eleven Clipper 70s ready and raring to go. I dictated the sail plan would be Yankee 2, Staysail and 1 reef in the mainsail, allowing for a conservative start to the second race of Leg 8.

“We lined up in our start order for 07:40 and as all the boats jostled for course and position we promptly started the race at 08:00 LT. There was a huge range of tactics played straight from the start as some boats chose to hoist both headsails, some just the Yankee and two boats hoisted nothing.

Imagine your Korea was fast off the line and GoToBermuda followed as we remained mid fleet. As I called 10 minutes after start, the fleet all bore away going straight into spinnaker hoists of different styles. It was very close with many flappy spinnakers but ourselves and Qingdao were first to have the kite hoisted followed very quickly by the rest of the fleet. Zhuhai made a bold move in gybing to the north soon after leaving the rest of the fleet racing closely. Currently two fleets swerving each other's sterns and bows to not let the others overtake.

Unless you are present on a Le Mans Start you wouldn’t understand the excitement and the adrenaline that comes with. We now have 3000Nm ahead of us to battle for positions towards the overall race. On arrival in Derry~Londonderry some positions will be cemented forever!

The beginning of an epic battle! The Le Mans Start was organised in a perfect line up and the time came to hoist the head sails. It is a very exciting time because it it's the very moment we start competing against each other. Fighting close quarters with the rest of the fleet.

“The sooner we pick up speed the fastest we start pulling away. Soon after we all hoisted the kites following the well rehearsed manoeuvre to avoid complications. No issues with us, we keep moving forward across the Atlantic Ocean. See you all in Derry~Londonderry.

Race 14 is under way! So here we go, it's all or nothing. We are going to push but as I have told my crew, there is no point in pushing and ending up with two blown kites in the first week. So it's more a gentle lean than a push for the foreseeable future.

The Le Mans Start went well apart from our stay sail "falling down" at some point. It was a pretty hectic close start with us ducking behind Dare To Lead, with little room to spare. But we have got through unscathed, now we just avoid the impending wind hole!!!!

Song of the day - Wolf Alice, Don't Delete the Kisses

Heading in the direction of home now and lots of nerves on board this morning for the penultimate race start. Our transatlantic Joker began well, with a strong start followed by a code sail hoist, headsail drop and a reef shaken out seeing us at the front of the pack once again, jostling with GoToBermuda, WTC Logistics and Unicef.

An early split in the fleet will pay dividends for one group or the other and we are hoping it will go our way this time!

It's the start of the final leg home, for the worlders and myself this is a journey that started years ago and honestly, given everything that's happened over that time, it's quite amazing that we are here at all.

“For everyone on the boat it's the culmination of their Clipper Race experience and I know everybody is keen to enjoy their last ocean crossing and even keener to enjoy what promises to be a particularly boozy stopover in Derry~Londonderry! 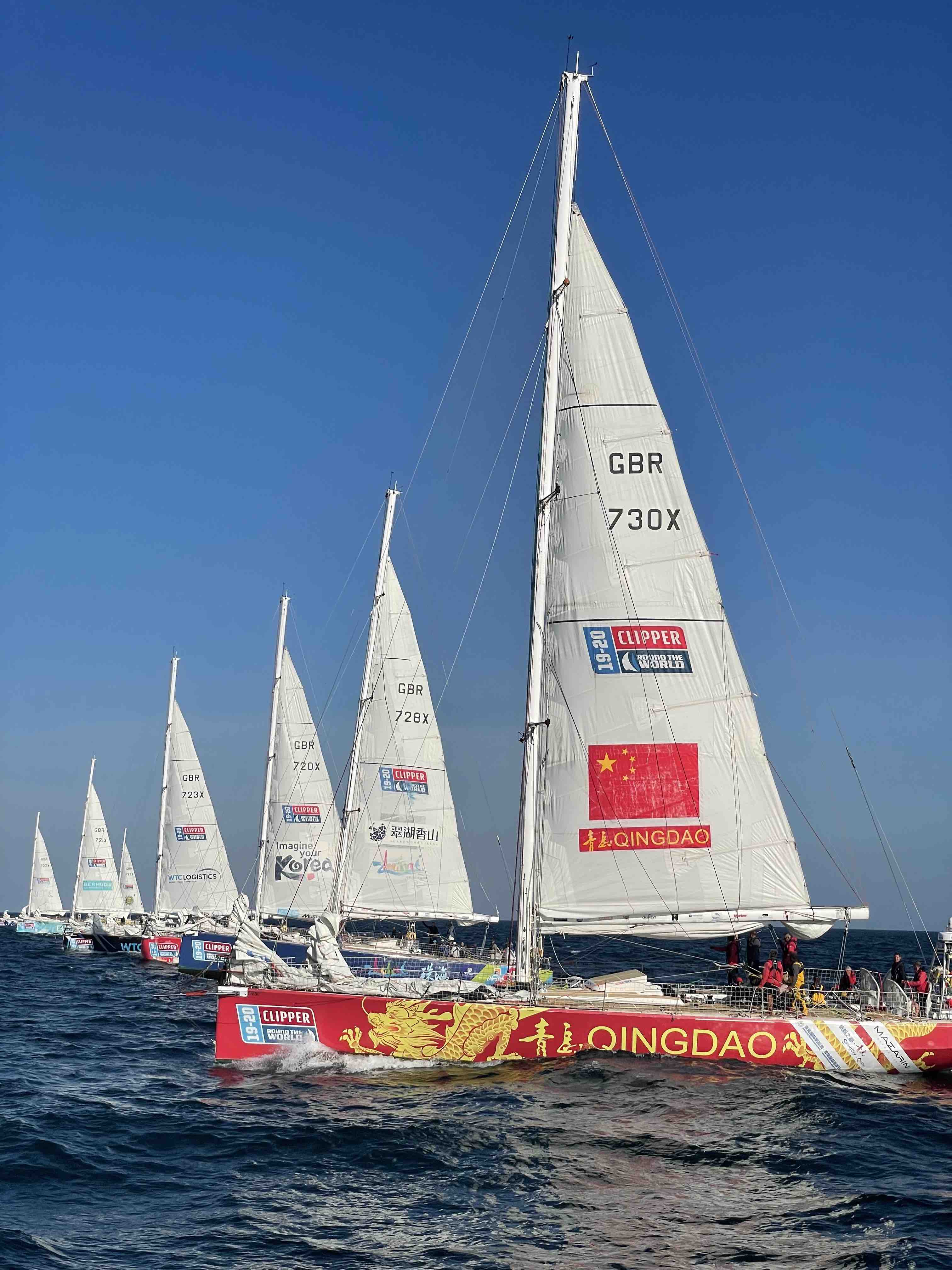 “As ever, the start was a great spectacle in the summer sunshine. A very tactical affair, as we started by heading in the wrong direction, but now the spinnaker is up and we are on our way.

“After arriving just in time this morning to rendezvous with the fleet, we lined up in between our Chinese counterparts for 0800.

“Our start was well managed by Dan Jones (WTC Logistics Skipper) and we were placed near the leeward end of the line, which gave us a chance to start slowly and peel off to sail a lower wind angle in cleaner air.

“Unfortunately the wind direction is not giving us a great VMG to the next Waypoint Bristow and we are also expecting light airs to move in from the North West later today, which will further hinder our progress. But it’s early days in a 3000 mile crossing and we are enjoying the company of most of the fleet, for now!

Blue skies and 12-14 knots of cool breeze greeted the Clipper Race fleet this morning for the much anticipated Le Man Start. The fleet formed up promptly with all crews clearly eager to get proceedings under way.

“Overnight the wind had been gusting to 20knots and the forecast correctly predicted that this would be decreasing throughout the morning. As a result of the gusty conditions, the fleet jostled initially with a reef in the main sail, a Yankee 2, and a stay sail combination. This made for a great line up.

“Once the start sequence had ended, Unicef opted to hoist a heavy weight Code 2 spinnaker just whilst the breeze was still settling down. This may be swapped out later this afternoon.

“The start was tight with no real breakaways from what we saw. Across the fleet was a brilliant demonstration of crew work to quickly change up from the modest sail plans. With cameras covering all angles the crew knew how important it was not to make any mistakes. Racing is one thing...but pride and crew bragging rights in the bar is another.

“At this point in the race, certain teams' spinnakers have 'character' with numerous repairs and battle scars. Regardless, these didn't seem to slow them down too sadly. Zhuhai opted for an early break away and was the first to gybe off. Other teams got up close and personal as the boats’ speeds were very evenly matched.

“So now we settle into what looks like a beautiful downwind race across the pond.”

To follow the action of Race 14: LegenDerry Finale keep the Clipper Race Viewer close to hand.

This morning, the eleven-strong fleet of Clipper 70s slipped lines from Liberty Landing Marina bound for Derry~Londonderry. The yachts motored…