After nearly a week at sea racing around the clock in Race 12: The LegenDerry Race, the majority of the Clipper Race fleet is separated by just 55 nautical miles (nm) which will make the upcoming Scoring Gate tactics interesting to watch unravel as the teams continue to storm their way quickly through the first half of the race.

The fleet remains closely compacted with two main groups formed; a larger northerly group with the bulk of the teams and a southerly group formed of Qingdao and PSP Logistics. In the northerly pack, Sanya Serenity Coast Skipper Wendy Tuck is hoping to catch the frontrunners. She reports: “We are still chasing that front pack, and now with the breeze lightening up we might get a bit of the old fleet compression, the words you hate when out the front, but that you love when you are in the chase.” 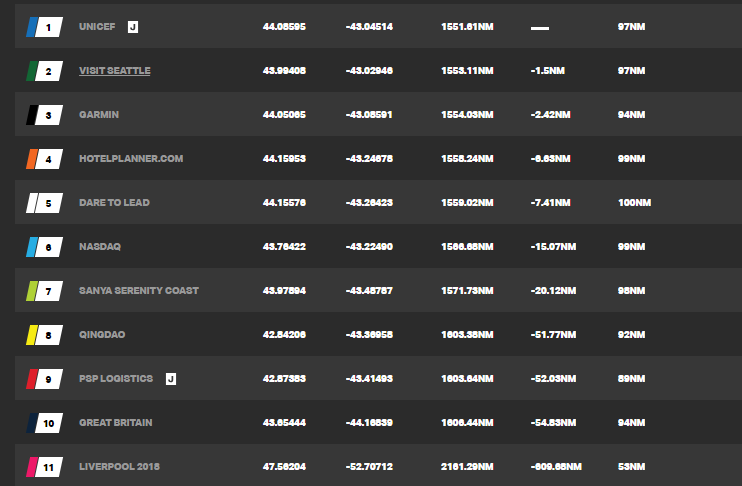 On board HotelPlanner.com Skipper Conall Morrison, who is racing to his home town of Derry-Londonderry and is currently in the leading pack, explains just how close the teams are: “Dare to Lead remains under 2 nautical miles (nm) behind us right on our stern (Hi Dale) and they are keeping us on our toes. Visit Seattle has come from the south to join the party and has edged a 7nm lead on us since they crossed our bow three nights ago.”

He adds: “We have had great sailing conditions through the night also and need to work out how to negotiate a light wind patch ahead. The question also remains to Scoring Gate or not to Scoring Gate?”

For Visit Seattle, which is second on the leaderboard and up with the race frontrunners, tactical decisions are at play as Skipper Nikki Henderson explains: “Next stop, Scoring Gate or no Scoring Gate? And hopefully we make it through the big green area of adverse current on our current chart and, with some luck, it will more accurate than the rest of the chart has been and we won’t find out that actually it doesn't even exist!"

Though, the team’s mind has been turned to non-racing thoughts after experiencing the effects of sea temperature change over the last 24 hours. Nikki adds: “When you see first-hand what an incredible difference the temperature of the water makes to the weather and the surroundings, all of a sudden melting ice caps and rising levels seems much scarier and much more real than it does just reading about it in some environmental magazine.

“We really need to find ways to look after our seas - we take so much from them and give so little back.”

The southerly teams, Qingdao and PSP Logistics, will be hoping that the Gulf Stream will still aid them to get a competitive edge over the northerly pack. PSP Logistics Skipper Matt Mitchell says: “The spinnaker has made an appearance at last although the wind has eased so we are not breaking any speed records right now. We are sailing in company with Qingdao (morning Chris) which seems to have got slightly better speed.

“Otherwise all is well on board, it looks like we have one more blast of the Gulf Stream to give us a boost and if the forecast is to be believed the northern group have a bit of a counter current to deal with. We'll see how that pans out.”

Liverpool 2018, which has diverted to Newfoundland to medevac a crew member, is due to make landfall this morning and will be back underway once the medevac formalities have been completed.

Looking ahead, the fleet looks to have a very tricky couple of days as it negotiates a cell of high pressure coming towards it. With further fleet compressions, Gulf Streams and Scoring Gates looming ahead, Clipper Race Viewer addiction is set to increase for those watching from home.