On Day 7 of Race 6: The Wondrous Whitsundays Race, the Elliot Brown Ocean Sprint has turned into a marathon as wind holes have halted the progress of the Clipper Race fleet as it battles against the strong East Australian Current, which has even taken some teams backwards at times.

Whilst frustrating for Skipper and crew, it has been fascinating to observe the Race Viewer with regular changes in position. It appears that Liverpool 2018 has played the tactical game best and took the lead before entering Stealth Mode at 0600 this morning. Skipper Lance Shepherd explains: “By taking us inland we were now in a position to hug the coast and try to utilise an element of sea breeze to take us north. So that's exactly what we've been doing all morning. It's been great fun sailing up and seeing the sights of Byron and the famous Gold Coast.”

With Liverpool 2018 under the invisibility cloak, it is Sanya Serenity Coast which, once again, is the official race leader today although Skipper Wendy Tuck has been frustrated by the lack of progress: “If you went to bed and woke up and we are still in the same place, do not adjust your computer… It is still working, it’s just that the wind has not been working. We have sort of just been zig zagging with not much forward motion happening.”

In second place, Visit Seattle Skipper Nikki Henderson has remained philosophical, saying: “Sailing is one of those tough sports where you don't really know when the hard work is going to end - it could be a week, it could be double that - the endurance required is phenomenal at times.”

Third-place Qingdao remains within 10 nautical miles (nm) of the race leader but Skipper Chris Kobusch reports: “We misjudged the East Australian Current and now have to play catch up with Visit Seattle, Sanya Serenity Coast and Liverpool 2018. Still 600nm to go, but the game just got harder.” 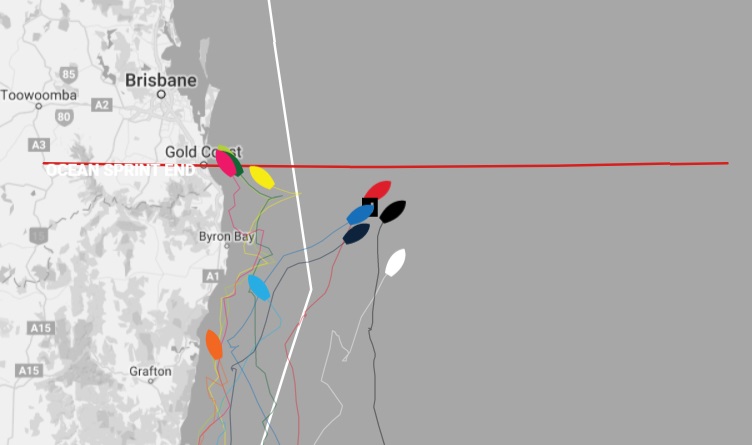 Whilst the top three teams have followed Liverpool 2018 on more of an inshore route, the next five teams have headed further offshore. Leading the eastern pack, but in fourth place overall, is PSP Logistics and Skipper Matt Mitchell has explained that it was a painful night at times: “We were drifting backwards with lots of current against us and very little wind.

“The guys did a great job pulling through though and the outcome could have been a lot worse! We appear to be out of the current now and although speed isn't sensational, we are moving a lot better than we have been!”

Unicef is in fifth and Garmin has recovered well to now be in sixth position having initially re-appeared from Stealth Mode at midday yesterday in tenth place. Having played its Joker Card on this race, Skipper Gaëtan Thomas has not given up hope of a strong finish: “Nothing is finished until we're across the line in Airlie Beach! We are working hard here on trimming, on driving, on tactics to get back in the lead.”

GREAT Britain is in seventh place and Dare To Lead is furthest offshore in eighth with Skipper Dale Smyth reporting: “We made the massive error of being too far out in the East Australian Current in a dying wind and drifted backwards for a grand total of 17 miles last night. I have been trying to head inshore for the last three days but have always found favourable velocity on the tempting offshore tack and would have had to suffer major loss to go inshore.”

Meanwhile, further inshore and around 60nm behind the race leader in ninth place, is Nasdaq. Skipper Rob Graham says that between the wind holes, headwinds and gyres (swirly bits) of the East Australian Current, the team has hardly been moving and at times been going backwards: “I don't know how much detail the Race Viewer gives of our track, but looking at our screens onboard, Nasdaq seems to have traced a picture of a whale in the ocean with all of our meanderings.”

In tenth place, and around 85nm behind the race leader, HotelPlanner.com Skipper Conall Morrison is preparing for stronger winds after quite some time in a wind hole: “This north-easterly breeze that has filled in is forecast to be stronger than what we have experienced of late. Looks like there will be sail changes and reefs required and more upwind sailing than I would normally choose.”

Clipper Race Meteorologist, Simon Rowell, has confirmed that the breeze should back for the teams and will be ‘on the nose’ until sometime on Sunday night when the next front should catch up, before a final good run to the finish in Airlie Beach.

After the Clipper Race fleet split into two packs, it has converged again over the last 24 hours as teams tackled stormy conditions, known locally as Southerly Busters, ahead of the Elliot Brown Ocean Sprint.During the fifth day of racing, it is Visit Seattle that…

A gripping race to the Scoring Gate unfolded during the third day of Race 6: The Wondrous Whitsundays Race which…