The Mandatory Gate Haller lies between the Japanese islands of Hachijō and Aogashima and for the Clipper Race fleet it marks the edge of the open Pacific Ocean. As the teams converge again, on what is the last compulsory gate until the Finish Line in Seattle, no one team has managed to forge themselves a significant tactical advantage.

PSP Logistics Skipper Matt Mitchell had hoped a more northerly position would be beneficial, but with his team currently second he says: “The advantage we thought we may have gained didn't occur however we haven't lost anything either with what looks like race start number three approaching the gate. We can see the majority of the fleet on AIS and we are all in a line pointing at the next mark.

“In some ways this is good as no one has broken away from the group, in others it's quite annoying as having a break away is always a good thing, as long as it's you that has got the distance that is!” 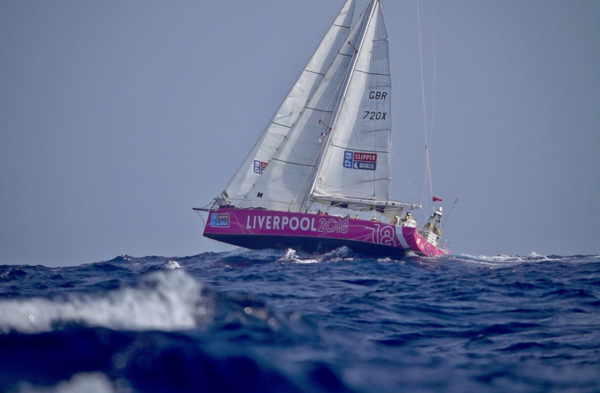 Less than fifteen nautical miles separates the top nine teams and Chris Kobusch, Skipper of third place Qingdao, explains: “It seems all the light wind patches and mandatory waypoints plus gates keep the fleet together. By now we have most of the fleet (eight including us) back on AIS and therefore within 15nm of each other. All heading for the last mandatory gate, Gate Haller, before crossing the mighty Pacific Ocean.

“It is quite amazing how close it is once again after racing over 1100nm so far. But then again, we are only half way to the Scoring Gate and only a fifth of the way to Seattle.”

Despite how close the racing is, weather conditions have varied within the fleet and the light and variable conditions that have plagued the teams since race start still dominate.

For three-time Clipper Race Skipper Bob Beggs, the conditions are nothing like those from previous editions. With Unicef currently topping the leaderboard he says: “24 hours under spinnaker has been a delight after the beat of the days previously, accompanied by unbelievably cloudless skies, warm weather and flat seas. This passage through the Yellow Sea and East of Japan has nothing in common with my two previous Clipper Race circumnavigations when passing through these waters where gales, storms, grey skies, and mountainous seas were the norm.”

He adds: “As per usual the fleet is condensing at a gate or choke point after several days with a large frontage and many different strategies all now start appearing on AIS.” 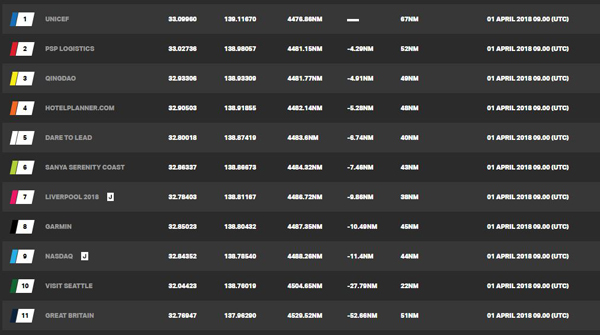 Whilst the majority of the fleet is thinking ahead to their tactical choices once through the gate and into the open Pacific Ocean, today has also been a day of reflection for crew on board and the entire Clipper Race family.

Two years since the tragic loss of Sarah Young some of her friends and crew mates have returned to the Clipper Race and on board Visit Seattle the team held a minute’s silence. GREAT Britain Skipper David Hartshorn, who was also Sarah’s team mate on IchorCoal in the 2015-16 edition of the race, reflects: “On this Easter Sunday let’s take a moment to remember absent crew especially Sarah Young, Simon Speirs, Andy Ashman and John Fisher (Volvo Ocean Race). All of whom were lost before their time, achieving something remarkable and pursuing their dreams.”

Skipper David also remembers fondly the Easter treats that Sarah gave out to crew mates a couple of years ago, before her passing, and Easter has not missed the teams despite being out at sea this year either.

Treats, surprises and some April foolery has spread amongst the fleet, along with reports of sunshine, and abating of seasickness, moods have been brightened. On board Nasdaq, Skipper Rob Graham said: “There was some April foolery of our own onboard Nasdaq today - all of Starboard Watch's treats and snacks disappeared ... replaced by the first in a series of rhyming clues to their location in a 70' treasure hunt. Well done Port Watch!”

Looking ahead to the weather forecast Simon Rowell reports that as the fleet nears the open Pacific they are due to receive some decent breeze to get through Gate Haller. After that it’s looking rather encouraging for the following three or four days, with a couple of lows giving favourable breeze.

As the leaderboard continues to change at every hourly update, keep track of the fleet to see what tactics come into play as the teams reach the open Pacific on the Clipper Race Viewer and hear more from the Skippers and crew on the Team Pages.

With less than a month to go until the Clipper Race fleet reaches the West Coast of the USA, preparations…