The Qingdao team is set to leave Japan tomorrow

Once the team has departed, Qingdao will motorsail out approximately 40 nautical miles which should take the team 5–6 hours and will start sailing once outside of Tokyo Bay. They will then start their 4500nm North Pacific Ocean crossing which should take 18-22 days to complete. Its current arrival window into San Francisco is 4-6 May.

Qingdao Race Skipper Chris Brooks says First Mate Bruce Anderson and himself are ready to go. “We are delighted to now be in a position to leave for our new plan to make safe passage to San Francisco. It will be a huge achievement to get the boats all back together again and everyone has worked hard with us from the Clipper Race Office to repair technicians, surveyors, along with Sir Robin himself who has invested much time in our safe return to the race.

“We look forward to leading a fantastic team back into the Clipper Round the World Yacht Race. It’s a pleasure to sail with everyone here and to work for an organisation that can deal with these out of the ordinary circumstances in order to get us back to sea at the earliest convenience, taking into account the current weather conditions.

“Qingdao will be able to rejoin the other yachts in time and we will do our best to catch up with the fleet. We thank everyone involved for all their support and look forward to seeing you soon.”

The Qingdao team was planning to leave earlier this week. After repairs were completed on CV30, the Qingdao team was well rested and ready to depart Yokosuka on Monday 11 April. However, at Clipper Race HQ in Gosport, the Race Management Team was closely monitoring the weather situation and paying particular attention to Tropical Storm Malakas. This system was intensifying, and all forecasts were showing that it would develop into a full blown typhoon and would be making its way north and east up towards the Japanese mainland by approximately 15 April.

The Management Team, which includes Race Director Mark Light, Deputy Race Director Dale Smyth, Chairman and Founder Sir Robin Knox-Johnston and expert Meteorologist Simon Rowell were all in communication and deciding on a plan of action. Calculations were made, checked and double checked and the general consensus was that if Qingdao could indeed depart from Yokosuka early on 11 April, and they could make a minimum of 200nm per day in an easterly direction, they could potentially get clear and far enough away from the Japanese mainland to avoid the worst of the storm.

The two main concerns were; What if the developing typhoon suddenly changed course and headed more to the east? And, what if Qingdao could not manage to make the anticipated daily average mileages in the right direction? 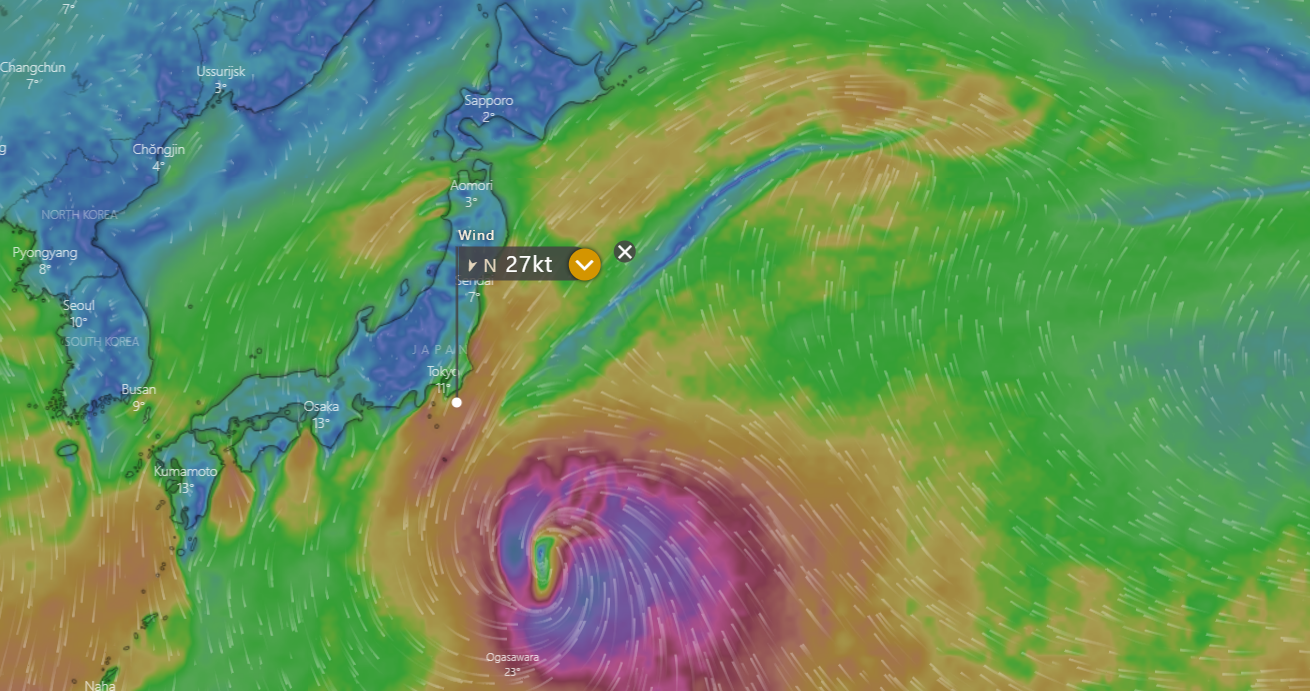 These two questions did not have definitive answers and the Race Management Team carefully deliberated over the decision. The team did not want to further delay Qingdao as it looked possible for them to depart and get clear, however, the risks and unknown factors were deemed too much to allow the crew to depart. It was decided that the Clipper Race team was not prepared to put the Qingdao crew into any such weather and a very difficult and potentially dangerous situation. 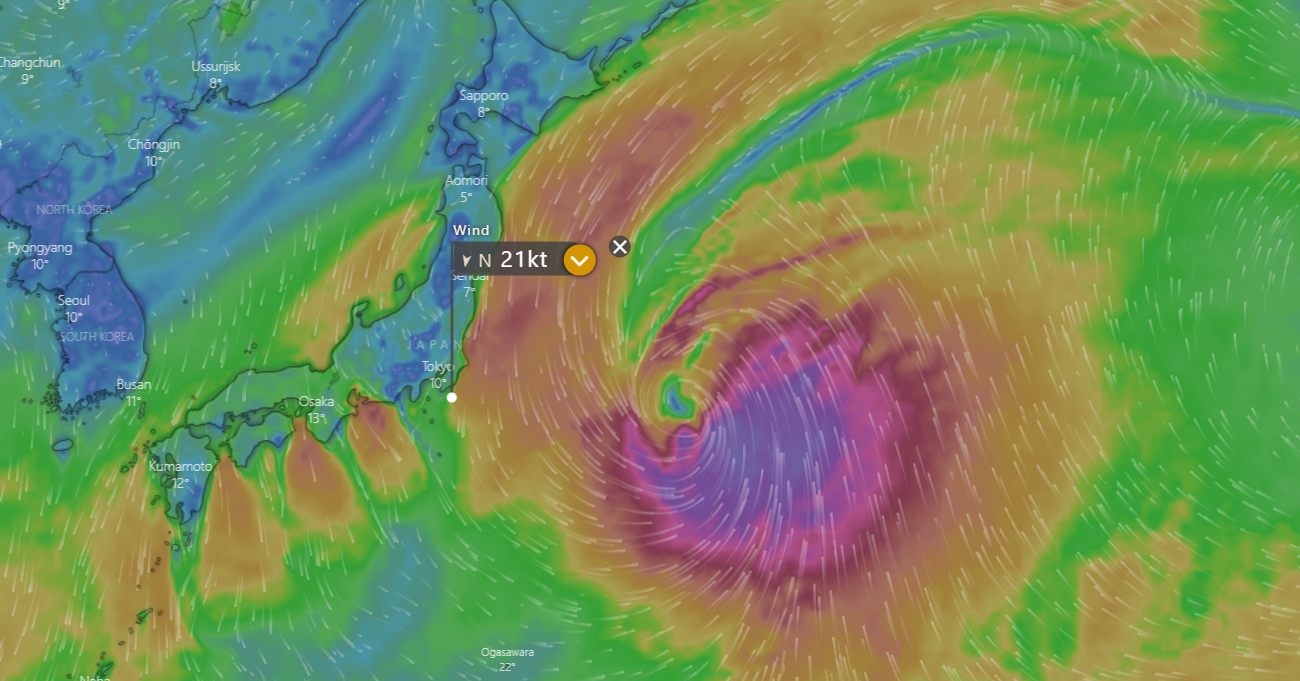 The decision was taken after very careful consideration and with the utmost concern for the safety and wellbeing of the entire Qingdao team.

Now looking at the actual track of the typhoon and looking further ahead at the forecasts, it was very clear that the right decision was made. The typhoon has tracked slightly further east, away from the Japanese mainland and the Management Team’s predictions show that Qingdao would have been in a location that would have given them very difficult sea state and wind strength to contend with. Essentially, the storm would have rolled right over the position in which Qingdao was due to have been in and this would not have been a very good situation to be in. 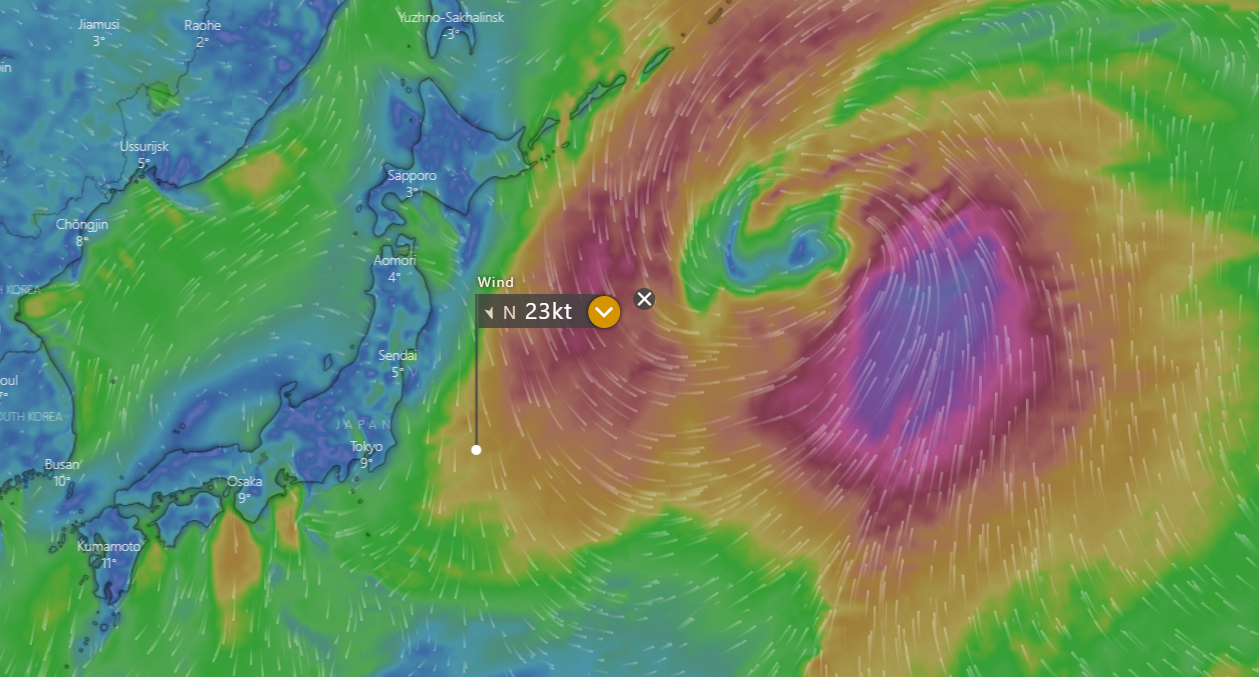 The typhoon currently is south east of the mainland and will not make landfall. The track is predicted to continue moving away to the north and a little further east than first thought. This now gives the Qingdao team the ideal opportunity to depart safely behind the storm force winds, knowing that every hour the system will continue to move further away from them as it travels at approximately 20 knots across the North Pacific Ocean.

After departing Yokosuka, the weather for the first few hours will be NNE to NE winds of 25 - 30 knots, with some strong gusts and an easier sea state. This will help to propel them out of the bay.

Once clear of the lee of the mainland and out into open water, the winds will be more northerly at about 20 knots and this will steadily decrease and as the storm moves further away. Trying to hang on to the back of the storm will enhance progress due to decent sailing winds. It should be a relatively fast start to the team’s journey.

There is a small ridge of high pressure that will try its best to catch up with Qingdao over the following 24 – 48 hours which may bring very light winds and a large decrease in residual swell. The team will do its best to avoid this and hope to pick up some decent south westerly winds as another North Pacific low pressure moves across.

Weather conditions across the North Pacific Ocean will be dominated by the low pressure (depression) systems that roll across every few days. Moving into the great expanse of the ocean, there are no land masses that impede these weather systems and this creates large sea states and big waves. The larger and more intense the depression, the stronger the winds and larger waves. Hurricane Force 12 winds are not uncommon in the North Pacific but they are very predictable and easy to track in advance.

The main tactic and key to a fast race is to position yourself on the correct side (the lower quadrant) of the depressions in order make best use of the strong westerly winds and fast downwind surfing conditions. The Clipper 70 Race yachts are absolutely best equipped when on downwind and reaching points of sail and they are very fast in these types of sea states.

The mighty North Pacific Ocean is one of the most hostile places on earth and few people venture there, let alone race across in high tech state-of-the-art race yachts. The feeling of remoteness is matched only by the absolute beauty of nature and the power of all elements combining to give an awesome display of the natural world.