“It doesn't feel like two years ago! The race was such an affecting experience that it still feels quite fresh.”

Bill Lyons circumnavigated the world in the Clipper 2017-18 Race, signing up after she said ‘I ran out of reasons not to’. Following a successful career in marketing, Bill wanted a physically and tangible challenge that would test her stamina and the Clipper Race offered that and more.

“It’s life cleansing and you will very much get back whatever you decide to put into the experience.” 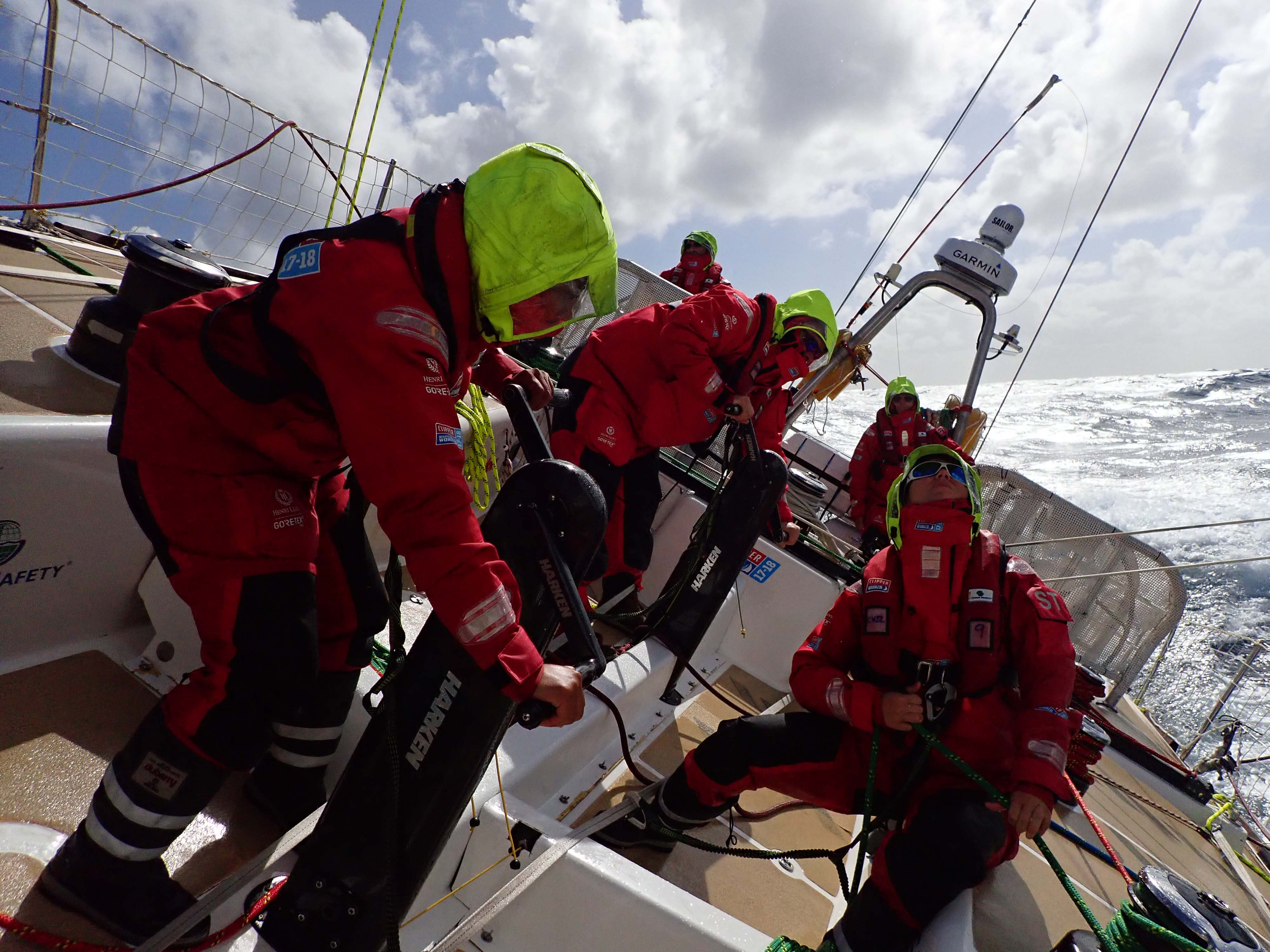 IMAGE: The Garmin team during the Clipper 2017-18 Race

Two years on she has been reflecting on a blog she wrote during Leg 7, ‘What I want to be when I grow up’. “The part where I wrote about friendships being the most important part of the race still rings true the most - I'm in weekly, if not daily, contact with people that I met through the Clipper Race. We’ve been on courses, holidays and many many social nights out. A bunch of remarkable women (and one honorary man).

“There is still a constant flow of amusement, support and helping each other out when needed. It's awesome to have a go-to group when you are looking for intrepid folk to join you on new adventures.” 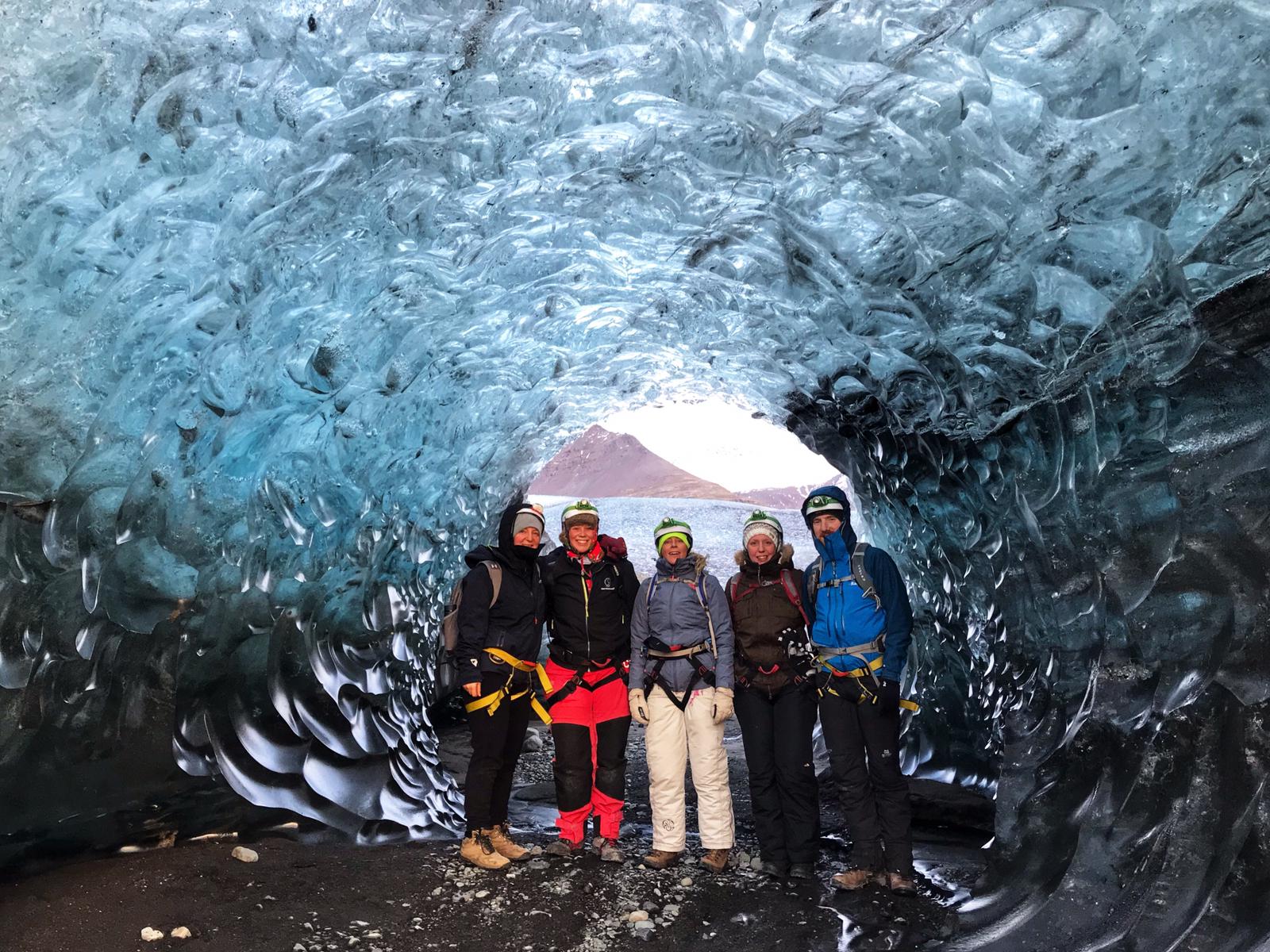 Reading her words once again brought back some vivid memories of the last few stages of her circumnavigation: “I definitely remember the smell of the boat when I was writing the blog! I remember the feelings of being a bit bewildered at the prospect of soon being back out in the 'real world' after nearly a year and there definitely was a period of readjustment. I wish I could have realised at the time how much resilience I had learned that helped get me through.”

That resilience is useful now more than ever. Since finishing the race, Bill applied to university and recently completed her first year on a BSc (hons) in Sports Rehabilitation sitting her exams whilst in lockdown.

“On the race, after lengthy chats with some of my crew-mates, I had decided to apply for university. As I was working in marketing before the race, I only had expertise in colouring-in, so I had to do two A-levels and GCSE Maths to meet the entry requirements.

“I have now just completed my first year. The degree focuses on athletic performance, physiological adaptations to exercise, team dynamics and psychology in sport - so I find that I can relate a lot of what I am learning about to my experiences on the race. And I would love to apply what I have learned to sailing after my degree.” 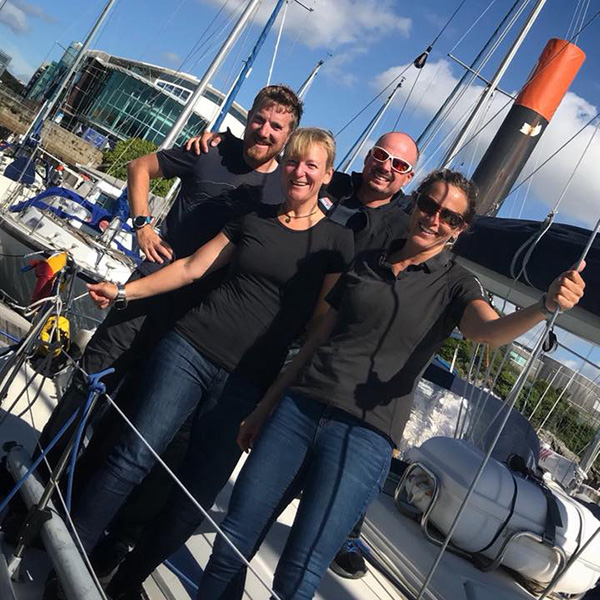 Bill has also spent time back on the water securing her YachtMaster Offshore qualification with fellow Clipper Race Crew, consolidating all that she had learnt from the race, and competed in the RORC Summer Series with Clipper Race Skipper Lance Shepherd’s team.

On what else she has taken from the race she said: “I still try to find joy in the small stuff. That was a really essential reminder for life and for spreading the sunshine.”

Bill repeats her own reason for signing up when asked if others should race around the world. “I can't think of any reason not to’.

On Leg 1, our lovely circumnavigator Erik declared, “Growing old is inevitable, but growing up is optional.” It's an adage that many of us have determined to live by.

However, now that we are closing in (or floating towards, courtesy of yet another windhole) on the end of the first race of our penultimate leg, conversation has been rife about the 'what next?', for those of us that chose to duck out of 'normal' for nearly a year. Many people comment that doing RTW with the Clipper Race must be life changing... But I would describe the experience more as 'life cleansing' – what we decide to do with that is an onerous task indeed.

Aside from attempting to learn the serious business of sailing, the Clipper Race will strip away every comfort that you have upholstered your life with – and I'm not just talking about your soft furnishings. 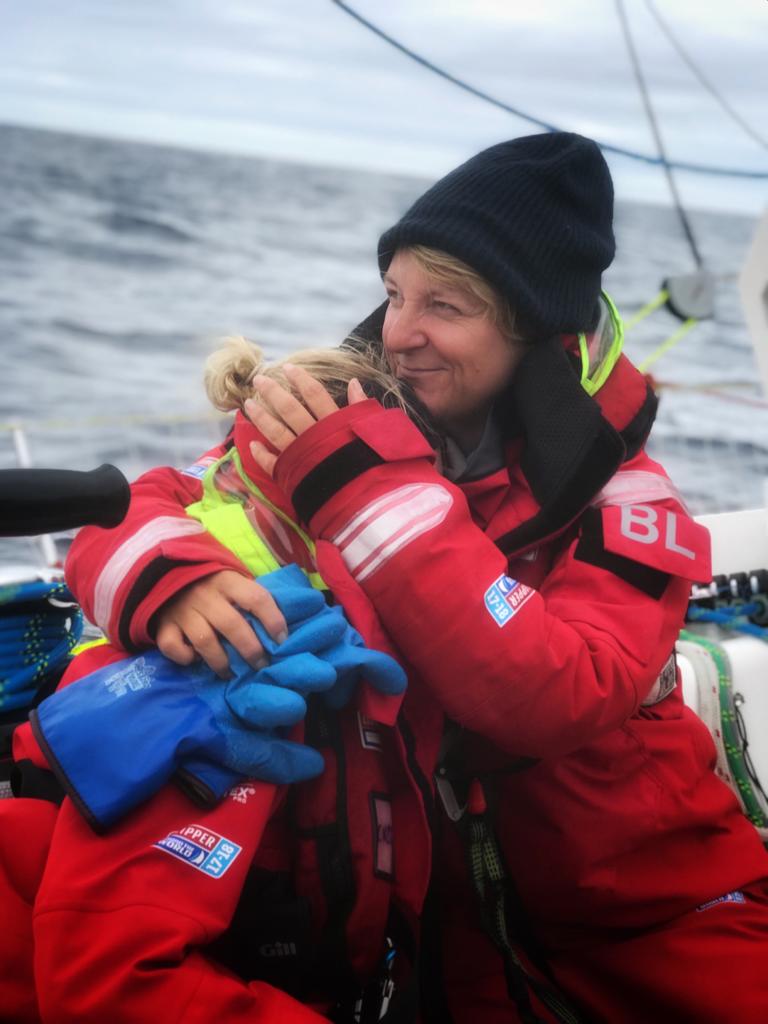 Fitness – no amount of time in the gym can ever prepare you for the level of fitness you need, and eventually acquire by sailing for 12 hours a day. Before the race, I was about as aerodynamic as a bungalow, but now find myself having to buy new clothes in most ports to keep up with the shedding of unnecessary pounds. I enjoy being strong and I also enjoy being allowed to eat my (dwindling) body weight in gummy bears without remorse, but that bit will have to stop. Probably.

Possessions – if it doesn't fit in a 60L dry bag, you probably don't need it. Same goes for fashion.

Confidence – it's a curious thing to spend a good portion of your life getting good enough at something that people will freely give you money for your skill and then voluntarily step off the precipice of knowledge (in my case at least) to become an absolute novice at something that you then choose to participate in every day. The learning curve is steep and the parameters so variable that you spend most days feeling like you are just guessing at getting things right. Any time that you are foolish enough to think that you have it 'ok', the wind will laugh in your face and make the windex pirouette like a drunken flibbertigibbet. Or you'll have nine things right and your Skipper will tell you that you're an idiot for not noticing the one crucial thing. It's always the most important thing that you'll overlook, naturally. I have been told 'well done' for sailing-related activities four times on this entire race. As two of them were on this leg, I'm punting for double figures by the time we reach Liverpool. But I'm not overly hopeful.

Some days, you just need to set yourself small goals such as “remember to brush your teeth” to maintain some modicum of self respect. It's when you are at your lowest that the only thing that gets you through your day is the acts of kindness from your crewmates – like little Badger popping up with an unsolicited cup of tea, or James Lawrie's gentle voice cajoling me through a particularly tricky night of helming, calling the wind angle from the instruments so I could keep my eyes affixed to the luff and the windex in the pitch darkness.

Which brings me onto my next subject… Friends and family – You appreciate just how important these are.

Being at an especially low point at the end of the last leg, a fabulous friend flying out from home to visit with me (and the associated cocktails we drank whilst putting the world back in order) was the exact tonic I needed to carry on. Additionally, you'll have heard mention of the 'Clipper Bubble' – a perfect little sphere of fantastic people that you are always delighted to see after the stints of sailing related activities that transportus between the stopovers. I'm not sure if it's just the ilk of people that this race attracts, but the friends I've met are and will remain the true highlight of this adventure.

Well, it might be to the Skippers, but to the rest of us lesser folk – trying everyday to get better, to be terrified and do it anyway or simply just do our best is what motivates us most. The (brief) sailing related conversations amid our fleet mates in ports never revolve around leaderboard positions, but often around personal achievements. And we are pleased for and proud of each other and how far we have come. Our watch leader / mate and generally good guy Wayne is also brilliant at recognising when we are really trying hard and will reward us with a “bonza”,“ripper” or some other nonsensical Aussie-ism. We have a white board with “Wayne's World – quote of the day”, but I'm afraid we are yet to have anything vaguely printable thus far. 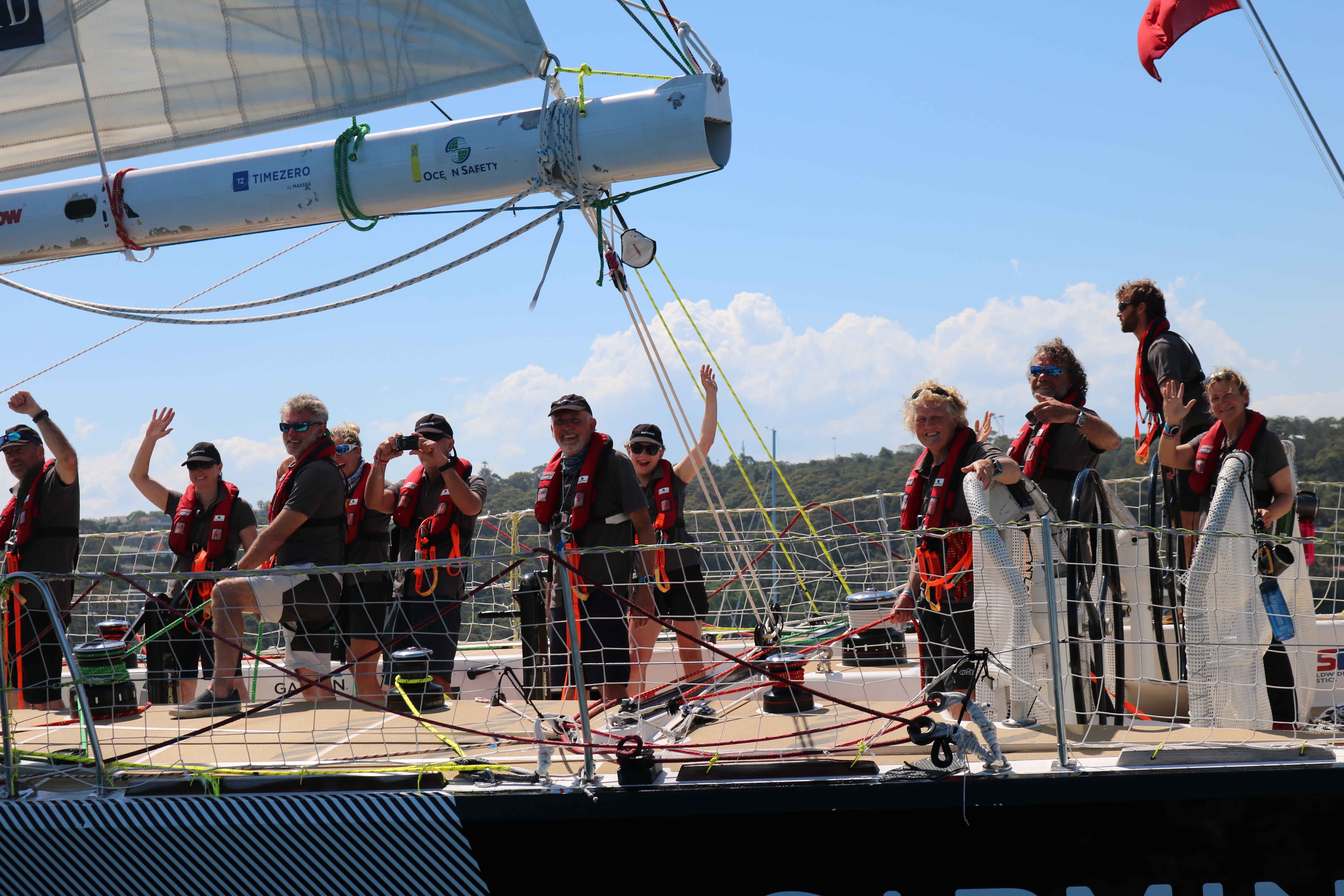 Good wine–very important. We have demonstrated that you can go without for extended periods of time, but there really is no need for such punishment.

The world–is beautiful. A legger was asking me which has been my favourite leg so far the other day and I was honestly stuck for an answer. (Obviously, knowing me, he got an answer much much longer than the one he had hoped for whilst making polite conversation, but there wasn't a specific point to it). Yes, we look at the sea and sky a lot, but no two days are the same and you feel joy with every sunrise or play of the light. We've seen countless shooting stars, a moonbow (a rainbow at night, extraordinary!!), dolphins frisking the phosphorescence into laser beams, whales breaching,jellyfish the size of a dining table that glow a luminous purple, a total eclipse of a full moon, waves bigger than apartment blocks, suicidal squid on the deck and today a seabird has floated past-taking a ride on a turtle. Whatever my future holds, I never want to stop taking the opportunity to explore our planet.

So there we are, back to our plans for the future. In a straw poll of 3 round-the-worlders on my watch, education dominates our future plans. Having spent the best part of a year trying (and mostly failing) to learn something new, it transpires that we all want to continue doing just that. Whether it be in the arts, science or economics, we want to develop and explore and grow. But not just because we didn't stop eating the gummy bears.

Applications are open for the Clipper 2022-23 Race.