The second event in the Clipper Connect Business Series for the 2019-20 edition took place on Thursday 17th October at the Yacht Club Punta del Este. It centered on a theme of Trade with Latin America, allowing businesses and government officials to discuss the opportunities and benefits associated with trade and business in Latin America, and Uruguay in particular. The event was a huge success, engaging Race Partners, Race Crew and members of the Yacht Club Punta del Este with a couple of networking sessions and a captivating panel discussion where panelists provided a fascinating insight into the business opportunities provided by Trade with Latin America. The panel was represented by participants from Bodega Garzón, Urufarma, the Foreign Office, the Department of Foreign Affairs and the Clipper Race itself. 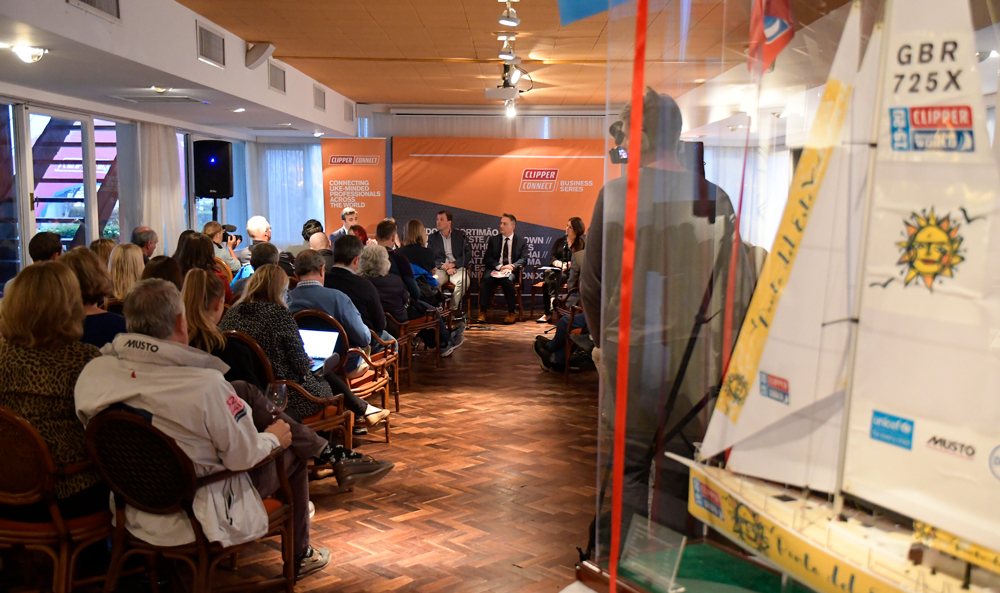 Nicolás Bonino, Marketing Manager at Bodega Garzón discussed which key markets are the current focus and which markets are the company’s target in the future, with the US and UK the current success stories and China being the next focus. Nicolás also provided an insight into what separates Bodega Garzón from its competition, with soil that is unique to Uruguay providing growth and flavour that other wineries are unable to match. It was also mentioned by Nicolás that being a Team Supporter of the Punta del Este team and that association with the Clipper Race provides a global platform for them to enter new markets and promote their products.

Rinaldo Corrazo, Foreign Trade Manager at Urufarma, a company that specialises in pharmaceuticals and is also a Team Supporter of team Punta del Este, talked about the company’s specific export objectives and also the current and future key markets that the company is focussing on. Rinaldo also touched upon how the company has had to adapt to broaden its business portfolio and enter new markets outside of Central and South America, which is where they currently have significant production and distribution reach.

HM Ambassador Ian Duddy of the British Foreign Office provided a fascinating insight into the significant business opportunities with Latin America, and Uruguay in particular which sometimes flies under the radar as a result of being sandwiched between the larger countries of Argentina and Brazil. Ian also discussed how companies in Uruguay can benefit from trade relations in the UK and its businesses and what is being done to encourage UK businesses to engage in trade relations with Uruguay. It was also mentioned how Uruguay differs from other South American countries and that there are significant business benefits as a result of its differences.

Juan José Barboza, Director of International Economic Organisations at the Department of Foreign Affairs discussed trade opportunities with Uruguay and which platforms are most beneficial for promoting trade opportunities with Uruguay to new audiences and markets. Juan José also talked about how the Department of Foreign Affairs aims to promote the export culture in Uruguay and Latin America, as well as what makes Uruguay an attractive country and market to invest in. Juan José then noted how partnerships such as the one between the Yacht Club Punta del Este and the Clipper Race can facilitate investment opportunities in the region.

Finally, Laura Ayres, Head of Partnerships at the Clipper Race spoke about how the Clipper Race provides a platform and acts as a catalyst for conversations that can lead to international trade and investment opportunities. Laura discussed a number of case studies and examples of previous Clipper Race editions where the race has supported trade and led to successful business opportunities through its events and network by connecting like minded-people across its Race Crew and Race Partner portfolio.

The next event in the Clipper Connect Business Series is due to take place at Harbour House in Cape Town on Wednesday 13th November, focussing on the theme of Investment in Africa and The Western Cape.