The third event of the Clipper Connect Business Series took place in the V&A Waterfront, Cape Town on Wednesday 13 November, with a focus on Investment in Africa and the Western Cape. Clipper Race Partners, local business contacts and Government Officials witnessed an impressive panel to discuss the topic matter whilst making valuable business connections centered around the Clipper Race platform they all associate with.

The Business Series travels the world with the Clipper Race, and the third edition was run in partnership with Wesgro, the Official Tourism, Trade & Investment Promotion Agency for Cape Town and the Western Cape. The host for the evening was a local radio broadcaster who captured the essence of the evening and led the panel after a welcome from Sir Robin Knox-Johnston. 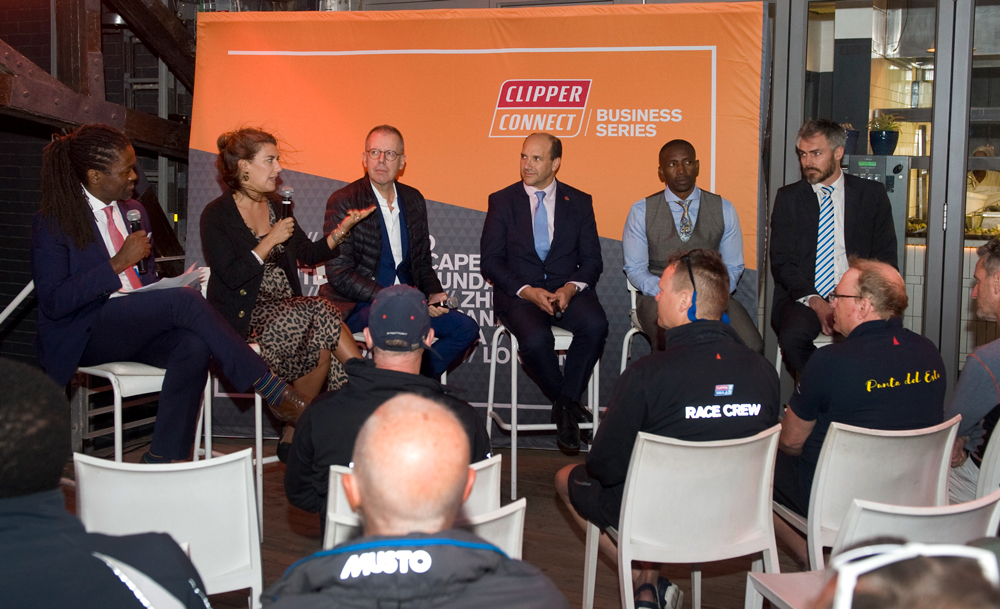 Tim Harris is the CEO of Wesgro, but prior to this served as a Member of Parliament and Shadow Minister of Finance for the Democratic Alliance. He brought some innovative points to the panel about Cape Town as an attractive investment opportunity for Tourism and Trade, using the Clipper Connect event to put a spotlight on the diverse economic landscape of South Africa. Wesgro is undergoing continuous work to attract increased trade and tourism to the region and Tim acknowledged the global leverage that the Clipper Race brings to Cape Town as a Host Port Partner with this being the tenth time the yachts have berthed in the V&A Waterfront.

Wavela Mthobeli represented South African Tourism as their Head of Analytics. Through his work, decisions are made and strategies implemented on the basis of data gained around tourist consumer behaviour. Wavela acknowledged that there are many opportunities not yet taken and work to be done to achieve the figures of tourism investment in South Africa that are possible. It was noted that South Africa has been, and still is, the host to some brilliant sporting events which can be pivotal in bringing tourism to the region, such as the Clipper Race. 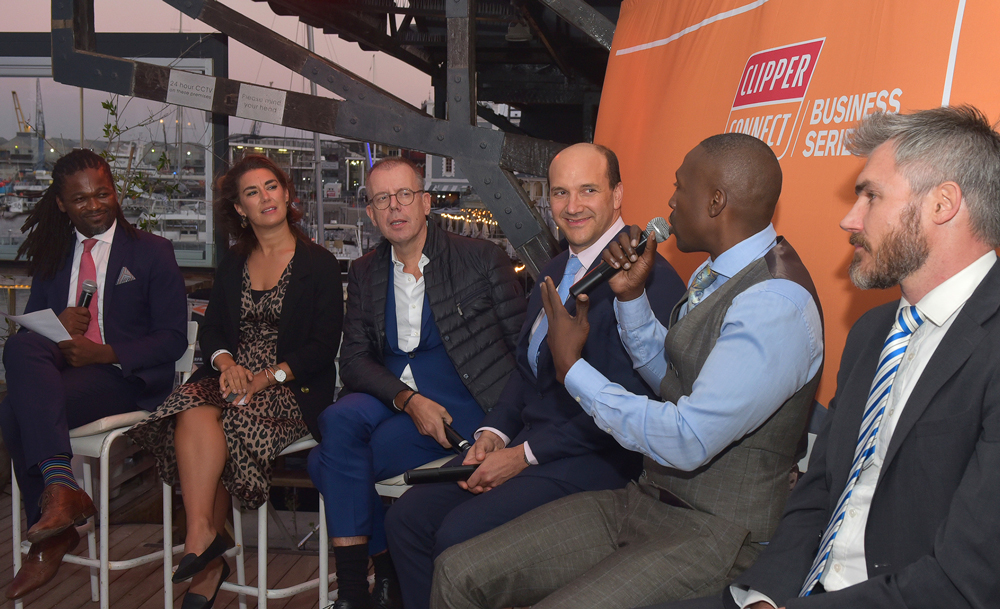 Nick Latta, Prosperity Councillor for the Department for International Trade (DIT), promotes equitable growth in the South African economy through programmes that enhance skills, improves the business environment and strengthens the trade investment relationship between the UK and South Africa. He spoke predominantly about the work the DIT are doing to increase the UK’s investment into South Africa and how this can be beneficial. The Clipper Race provides such a platform for the UK to strengthen its presence in Cape Town, as well as 14 other key destinations, and specific reference was made to the GREAT Britain campaign that ran over three previous editions of the race. This positioned Great Britain side-by-side with international crew and projected the UK’s values first and foremost, to ultimately benefit them in business as they raced around the world, interacting with South Africa on each of the three races. Nick explained that this sort of Foreign Direct Investment can significantly improve the local economies respectively.

Dirk van Daele, Founder of the Dare To Lead ‘concept’ partnership, spoke of the great work it implements for young South Africans who come from unfortunate tough backgrounds which ultimately limit them. Dirk provides a unique opportunity for them to participate in the Clipper Race, and the stories from each individual who has followed this process so far speak for themselves with brilliant outcomes and personal development. This existing partnership has gone from strength-to-strength, and showcases the opportunities for success that investment in South Africa can bring to both the investor, and the local people.

Finally, Laura Ayres provided the Clipper Race perspective. As Head of Partnerships, Laura has an oversight of all current invested Partners of the race and in particular, how Host Port Partners can greatly benefit from investing in it. She highlighted the unique business opportunity that the Clipper Race brings, and challenged everyone to think of any other investment their business makes which guarantees them brand visibility in 15 countries over the space of 11 months; nobody raised a hand to contest this.

The event was well-attended by an international audience, successfully allowing guests to make new connections that they may have not initially contemplated - the Clipper Race is delighted to be bringing these unique opportunities to so many people. The next event of the Clipper Connect Business Series will take place in Fremantle on Tuesday 17 December, with a theme of Promotion of SMEs on a Global Scale.