Long-time Clipper Race supporter, and former crew member, Dirk van Daele, has launched the next phase of his Dare To Lead partnership at a special event in Bermuda. It includes a fundraiser to create bursary crew places for the Clipper 2023-24 Race by auctioning off three sailing knots tied by its Chairman Sir Robin Knox-Johnston.

The occasion was marked with a special reception on board the Dare To Lead boat at the Royal Bermuda Yacht Club on Friday evening, where founder Dirk van Daele launched the fundraiser with the crew, race officials, Sir Robin and William Ward OBE in attendance. The official knot fundraiser launch took place in the stunning Huckleberry Restaurant, with the crew enjoying a well-deserved evening of drinks and canapés. 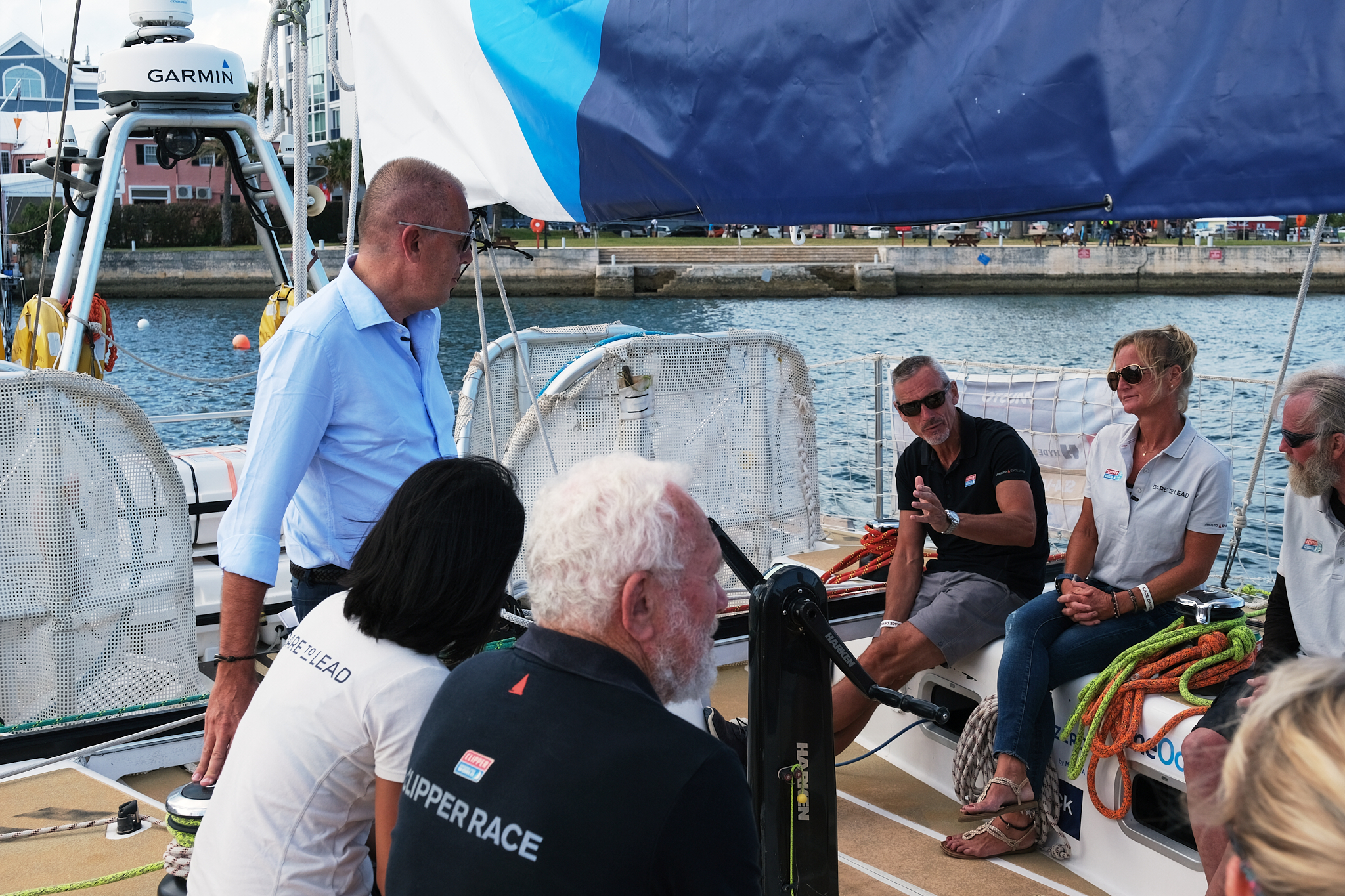 “We want to see more young people from around the world benefit from the development potential of participating in a leg of the Clipper Race,” Dirk told crew.

“In addition, it’s our ambition to continue with a Dare To Lead Team Partnership in future editions of the Clipper Race but our first priority is to raise funds for bursary places. So we are launching a series of digital online auctions to open this up to the world. Our first ‘lot’ so-to-speak is a series of sailing knots. Who better to launch this than the Clipper Ventures Chairman and Clipper Race Co-founder, Sir Robin Knox-Johnston.

“Sir Robin not only knows his knots but is a huge supporter of the power of this race to develop young people, especially those from challenging backgrounds who are transformed by their experience.” 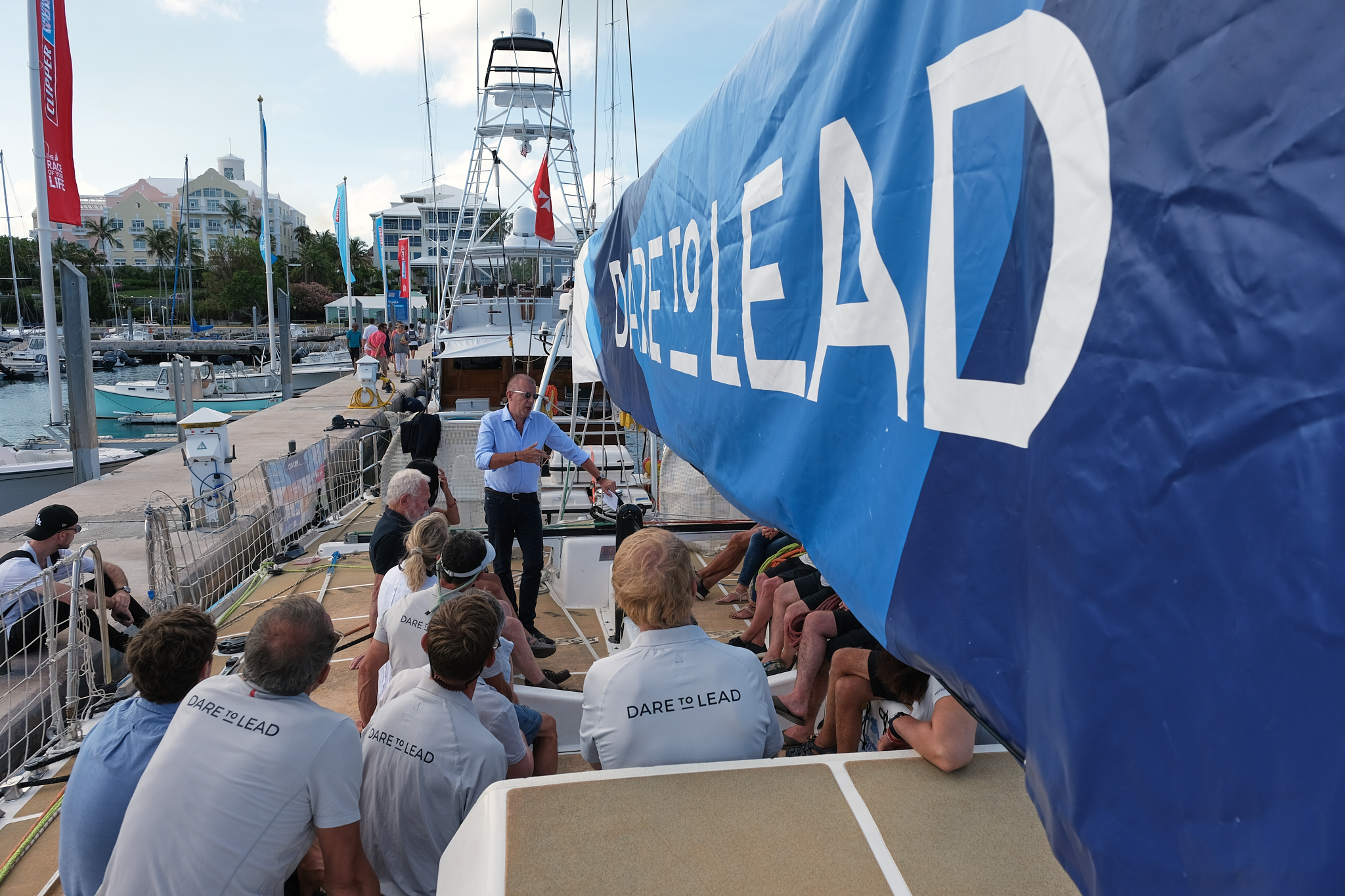 Sir Robin has tied a limited edition of three different knots for the campaign: A simple reef knot, a bowline and, his favourite, a diamond carrick bend. Each knot is unique and comes in its own presentation case and includes a QR code which links to a video of Sir Robin demonstrating how to tie the knot.

“Knots are part of basic seamanship because they are so fundamental,” explained Sir Robin. “It’s not just the satisfaction of tying a good knot, it’s a safety issue. You want to know you’ve tied it properly and it’s not going to give.”

Dirk van Daele participated in the Clipper Race in 2009-10 when he saw the success of a project which placed young people from the UK city of Hull on legs of the race. He was so impressed he created a project in the 2013-14 edition for South African youth, working with the Nelson Mandela Children’s Fund. He attracted yacht sponsor Invest Africa and continued in 2015-16 with Ichor Coal. In 2017-18 he launched the Dare To Lead team partnership concept which has continued into the current (delayed) 2019-20 edition.

Dirk has continued to support the development of the original South African youth participants with the Liyaba Rainbow Foundation, named after one of the original ‘ambassadors’ who was a role model for the project but, tragically, was killed in 2018 while visiting his home township.

Lebalang Molobele was selected in the first group through the Nelson Mandela Children’s Fund in 2013 and says the experience helped her to build confidence and ambition to strive for her dream of, one day, working with the United Nations. She said: “One of the ‘skills’ I brought away from participating in the Clipper Race was persevering and always having the strong belief that you are capable.

“That has definitely taken me a long way, even when I have challenges at work, I always believe I can do extraordinary things no matter how hard they are. I came back from the Clipper Race with the confidence within me - more of a feeling of being empowered. It was one major element that has made me break through all the difficulties, finding the confidence within myself.”

Driven also by her desire to bring about social justice, especially for oppressed women, her career path rapidly realised her ambition. In 2019 she became a Programme Associate at the UN World Health Organisation in South Africa. She is now with the UN’s World Food Program as a senior advisor to the African Union Development Agency.

Next month she will become project manager on a 4-year initiative to support disadvantaged and disabled women who are seeking careers in engineering, a field traditionally dominated by men in South Africa.

Lebalang is encouraging generous bids for the knots being auctioned. She said: “I learned on the Clipper Race that the challenges we face do not necessarily define who we will become. It is how we rise above the circumstances; we can become great human beings – with humility and empathy. It is a way of changing a person’s life. Buying one of these knots will open up an opportunity for a young person; it can actually release them to realise their full potential.” 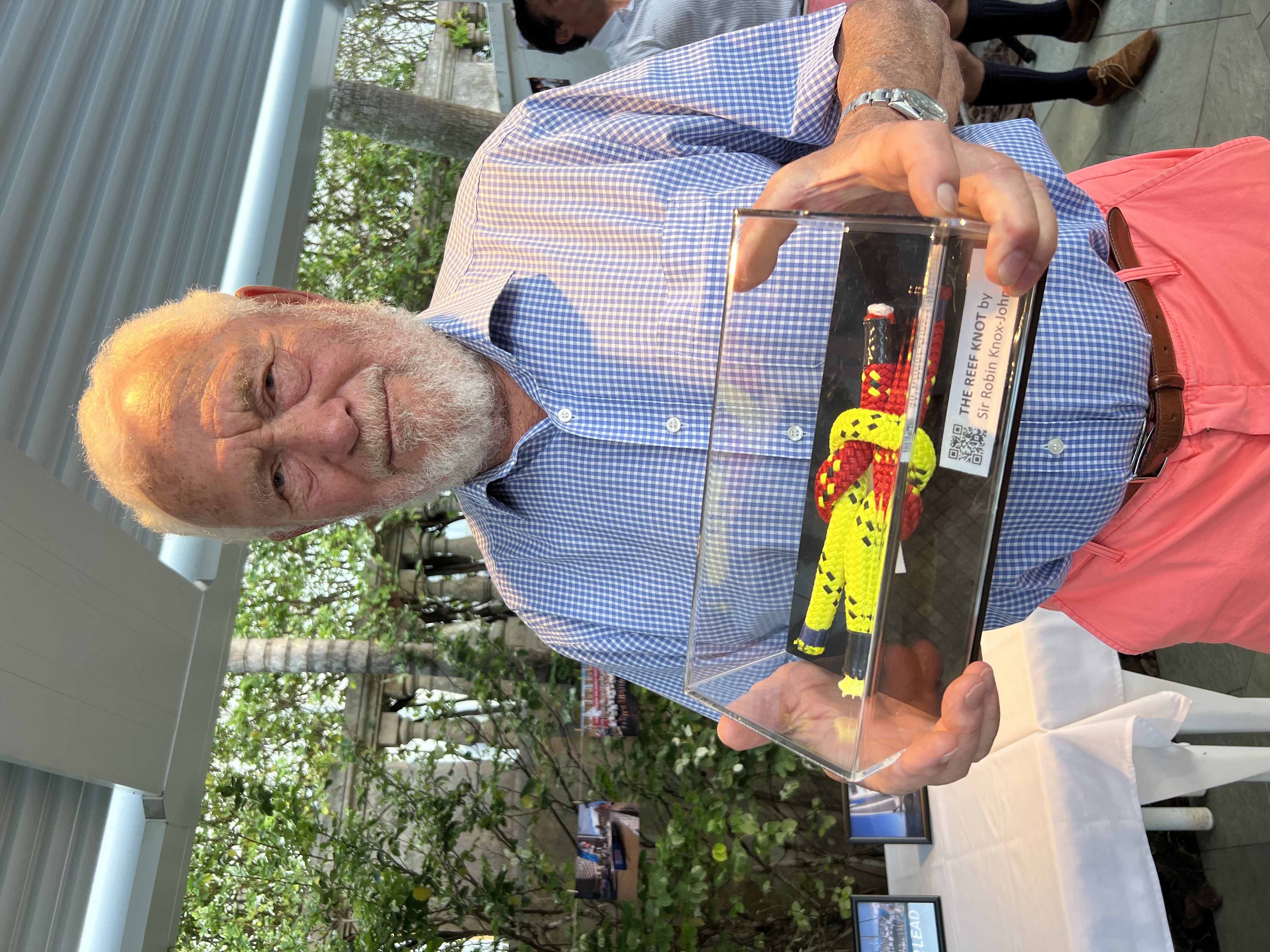 He added this message to prospective bidders for one of the three knots he’s tied for the campaign: “By bidding for one of these knots you’re going to invest in the future of a young person. Putting these youngsters on the Clipper Race develops them to the point where they’re going to be contributing; you’re not only benefiting yourself but you’re also benefitting all of us.”

Clipper Race CEO and co-founder William Ward endorsed these sentiments: “Dirk has been a long-term friend of the Clipper Race since he sailed as a crew member. He’s seen at first hand the power of the race to transform people through the achievement of crossing an ocean. I have personally met some of the young people Dirk has supported over the last ten years and followed their journey of personal development, building self-belief and determination. I never fail to be impressed by what they have achieved and am very proud to think we have played a fundamental part in their story.” 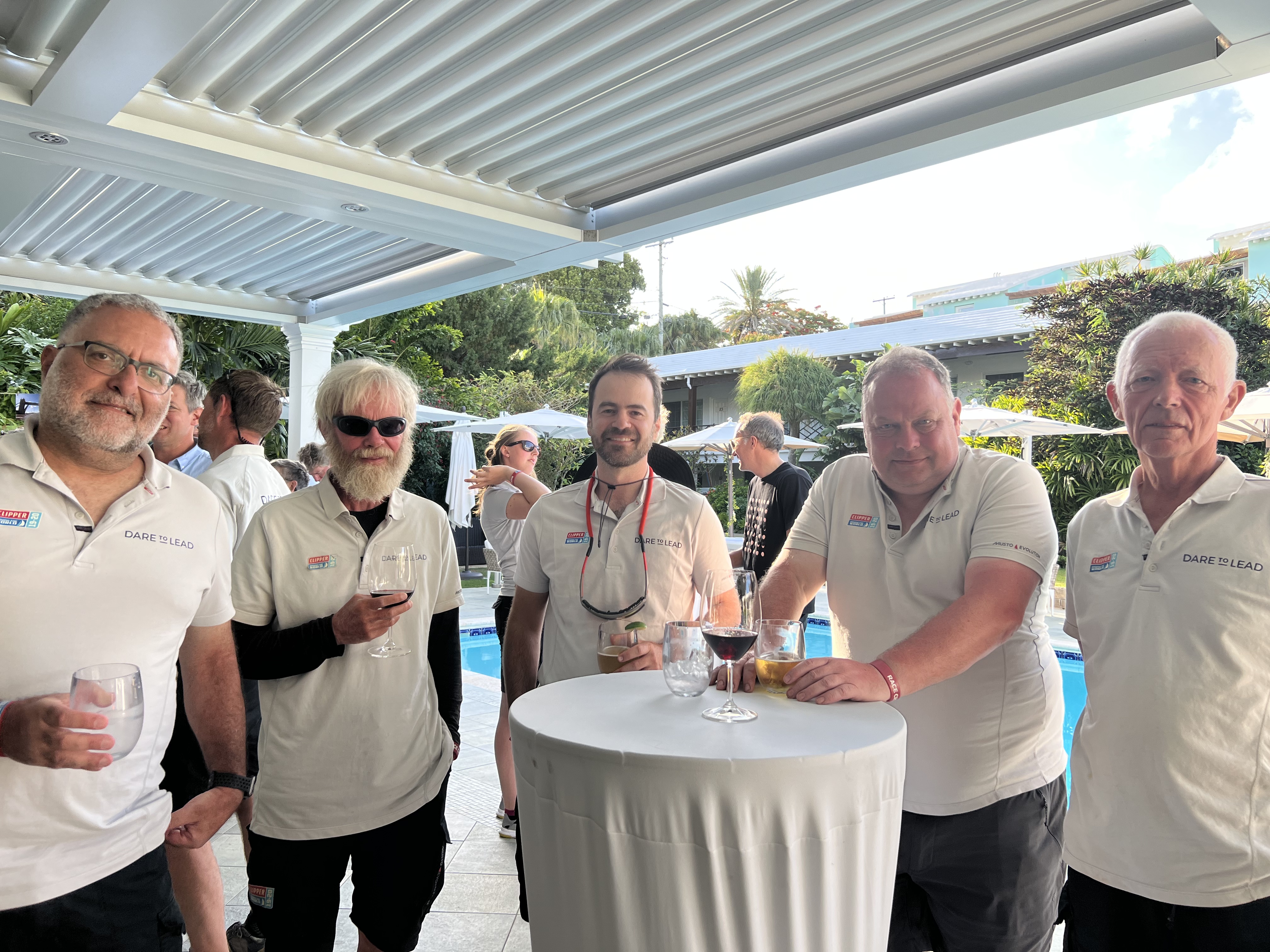 Image: Crew enjoying an evening drink at the Huckleberry Restaurant

‘Silent’ bids can be made by email. Full details of the campaign, knots in the auction and updates on bids are available on the new Dare To Lead dedicated website at www.DareToLead.auction For more information email: [email protected]

The auction runs until the London finish of the 2019-20 edition of the Clipper Round the World Yacht Race in the Royal Docks, London, on 30 July.