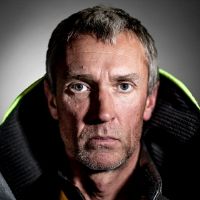 A day to remember, a night to forget...

Or was it the other way round? Either way, it hasn't been the prettiest of 24 hours. We have succeeded in trashing our perfect record of unbroken code sails by throwing the Code 3 overboard before it had even been hoisted, "could you come on deck and oversee the hoist?" I was asked, "certainly" I replied. I had barely put one leg inside my salopettes before I heard the cry "the code sail is in the water!"

Dragging it through the ocean, 45 minutes later, we were hauling it back aboard with a horrible tear from the head down! That saga concluded and we continued under the Yankee and Main Sail as the breeze slowly eased away. In the lighter winds, with a following sea, the helm proved difficult for some...we crash gybed, crash tacked and crash gybed again before continuing on our not so merry way.

Later, the breeze began to fill in again and we were making steady progress, after a steady night, at least the first part, I slipped into a deep off-watch sleep, only to be rudely awoken by a crash gybe in 30 knots, quickly followed by the cries of reefing instructions from our trusty AQP.

We continue our path south waiting for the shift to carry us east, hopefully with the events of the past 24 hours behind us, gone but not forgotten and dare I say it...never to be repeated?!

Guy et Hugues and the crew.

So having apologised, offered flowers to our loved one and generally skulked around for a while with our heads hung low in shame we are once again on the move. Powering along on the drag race to the mandatory finishing gate of Dell Latitude Rugged Ocean Sprint three, wondering whether or not we'll play games with an impending finish line wind hole?!

It's a short one today folks, my apologies but well, you see... we've been busy!

Guy, Al and The Crew