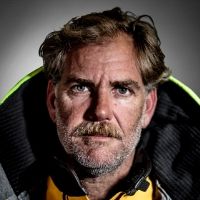 It's your friendly neighbourhood freelance AQP, Mike, here again. I've figured out Wavy's plot to sucker me into writing his blogs for him. He promises that he writes a blog in advance so that I can send it to the Race Office later at the specified time, then 'forgets' and see what happens.

After Day 1 on this race, instead of waking him up, I wrote one myself, and now he's got me. Oh well. I hope Fabian's brushing up on his blog writing skills for his glorious return on the next race!

The Dell Latitude Rugged Ocean Sprint was all going very well, until three quarters of the way up the sprint where the wind died. We spent an hour or so drawing pretty patterns in our track on TimeZero (weather routing software) whilst we swapped between the Windseeker and Code 1 to see which gave us the best speed, and dodged fishing buoys in the dark.

Once daylight came in the morning, the wind returned, but unfortunately from not quite the right angle, which meant we had to put a couple of tacks in to round the mark and pass through gate 4 - the top end of our Ocean Sprint. Wavy spent a while on the helm getting the best speed and height (i.e. wind angle) to reduce the tacks required to round the mark, and now he's off for a little well earned rest whilst we make best speed to the next gate and start of the next Ocean Sprint.

It's also Liz (Elizabeth? Lizzie? Freddie? Still figuring that one out) Poston's birthday today, so many happy returns to her! And I woke up to an extra large three-layer chocolate cake for breakfast. I don't know why chocolate cake for breakfast isn't a thing on land life. It really should be. Next up is salmon and cucumber sandwiches for lunch - in triangles, with the crusts cut off.

Tune in next time for our journey back to Subic Bay, looking like some nice downwind/reaching spinnaker action!