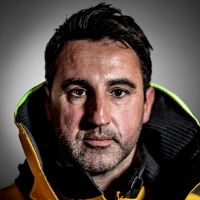 Hola from Punta del Este, we are at the heart of the Solomon sea crossing the Doldrums Corridor. To one side we have island of Papua New Guinea and on the other side the island of Guadalcanal (famous among other things for some of the fiercest naval battles of World War Two) The Salomon islands were discovered by the kingdom of Spain and its discoverer died there bringing the fleet back and his widow Isabel de Barreta as one of the first female Admiralty in history. Yesterday and today we have had lots of celebrations; Chinese New Year, Burns night from Scotland and Australia Day where Fiona welcomed in the day with Aussie decorations, balloons and face paint with the Australian colours.

This morning at 6am it was already 32 degrees of temperature, the deck is melting and best not to touch anything metal. The crew have worked hard to create some shade, using an old sail and everybody had tweaked a bit to give it their personal touch.

We had a fast run last night, entering the Solomon sea at good speeds with flat seas, the perfect conditions for all crew to get better at helming, so we rotated everyone to get some coaching. Everyone on board Punta del Este is really keen on racing and there are always questions and opinions on tactical issues. Special mention to Pip and Susan who are ultra competitors and want to get every detail on how the race evolves, I love their enthusiasm.

Life below and on deck continues no matter the weather, bread is being baked, meals are being prepared, hygiene standards need to be met and general maintenance. Happy hour keeps us confined on a small corner with shade where we laughed and played games for an hour.

Spirits are high on Punta del Este and we continue racing hard, patiently with the very light wind conditions.

Tune of the day: Girls Just Want To Have Fun - Chromatics.

Drinks consumed: No hot drinks at the moment, thank you very much

Meal of the day: One pot-Paella cooked by David and Ben

Crew of the day: The ones who created extra shade with

Tip of the day: Watching dolphins playing at the bow is a magical moment, enjoy it every time

Clipper Race Fact: Each of the yachts has a 1530 square meter sailing area or the equivalent of 3 premiership soccer ﬁelds