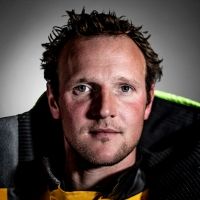 Well the first leg of the race was exciting. We started in the dark in a Le Mans start. All the boats lined up together and when it was time the crews ran forward to hoist their sails. We sailed due west towards our first gate and took part in the first of the three Dell Latitude Rugged Ocean Sprints. We had pulled into the front pack, but the sailing was mostly drag racing with very little between the boats. The wind was very steady until the end where we found ourselves with Punta del Este and Visit Sanya, China fighting for the top spot. We kept on sailing into the wind shadow of Visit Sanya, China as we couldn't sail low enough to gain separation. After attempting this a number of times we decided to try to overtake on the more difficult side. The side they would try to protect. Their windward side. You see the wind had come forward and getting down to the next mark at that point had seemed like just a matter of pointing at the destination.

We jockeyed into position and Visit Sanya, China reacted well, successfully defending our first attack. After several runs however we managed to lift up higher than them just enough to take their wind and gradually worked our way passed them as their spinnaker collapsed in the lee of our sails. It had allowed us to pass but it was a hollow victory and in hindsight rather unnecessary. No sooner than we had got past the wind changed in direction. It meant we would have to gybe to get to the mark and now both of us were offset even further away from our destination. We pulled ahead and continued to make our way to the gate.

We had it our own way but things were about to take a turn. Following our Kite wrap throughout a gybe in the last race we prepared to gybe down towards the gate. Turning through the wind unfortunately presented another problem with a halyard catching the Spinnaker. It took us a few attempts to untangle the situation, but the Code 2 was undamaged. It had however cost us dearly. The precious few minutes would have undoubtedly earned us two points in the sprint. That was the first of our bad news.

We set to gain composure and make our last gybe towards the gate and onto Ocean Sprint 2. Boats were coming in the thick of night like giant lanterns bearing down on us. We were the give way port tack and it was important this gybe went well. With so many failed gybes before it, we had to make it happen and now it was dark. A quick check to make sure there were no further complications and we made the call. Prepare to gybe centre the Main. The winches groaned and the crews danced into motion. The sounds of safety tethers like a cacophony as if to offer applause as the crew executed the sweetest fastest gybe we ever have.

We held our Spinnaker up onto the tight reach towards our next gate. We passed Dare To Lead who was having issues dropping the Spinnaker under the forcibly upwind conditions. I prepared my team. Red watch and Gold watch became Orange as all hands came on deck. Joining in spirit at the fore as if fending off an enemy. The halyards were eased and lines pulled as the team once more rallied around their foe. They neutralised the beast and wrestled our Code 2 down the hatch in lightning speed. Very impressive indeed. We rounded the mark making good speed.

We had been sailing for almost an hour before it happened. The call. The call that would make victory pale to insignificance. A word so obscure in that moment it may as well have been in Chinese. A fitting story for team Qingdao. Visit Sanya, China spoke over the radio. Their words were frank and unmixed. We saw that you didn't correctly round the last mark and would like you to check if you do not agree we will protest you.

I came away from the hand unit of the VHF. At first glance I checked the Garmin GPS Plotter and we had gone around correctly. I scrolled to the mark where it's position could be found.... Oh no, this was real, the mark had been input ever so slightly off. The degrees and minutes of its latitude were correct but the decimals were wrong. They were correct. In a twist of fate and turn of fortunes it was Visit Sanya, China’s turn to reign.

We immediately turned around no sooner than I could break the news to our fired up team. Fired up soon turned to fire in the belly and the irritation of being told more than 8 miles past our mistake fuelled the team. The Code 2 was still being repacked so the Code 3 was raised. Like Jesus from the tomb our Spinnaker flew to the top of the mast offering salvation as we sped back the way we had come. It was a two hour, 19 mile, set back and we are currently in last place.

The team on Qingdao don't sit back. They don't give up. Setting to maximise efficiency and sail well the watches worked hard together. On what is the shortest race of the round the world series with only less than 300 miles will we be able to catch the fleeing pack. The wind is light, and anything can happen. Will our flames be doused by the pale blue of our wind charts or reignited by the softest of breezes?

Join us tomorrow to find out.

Any Unicef donations are extremely helpful to the cause. please please help us help them on our just giving page Team Qingdao or our Facebook supporters page Qingdao team supporters