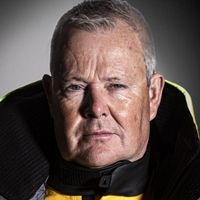 How are you keeping? It seems ages since we had our last chat. There's not much chat on board the "Seattle vomit comet" as we smash our way to windward through 40kts of breeze and some exciting seas: three reefs, staysail and the Yankee 3 are the order of the day. We switched to the Yankee 3 from the 1 in good time.

Wow what a stopover! Derry~Londonderry put on the most amazing reception that we have experienced on this edition of the Clipper Round the World Yacht Race. From the moment we arrived, to our departure yesterday the enthusiastic welcome and support that the city showed us was incredible. We were even stopped by the crew of the Guinness Dray outside a public house who wanted to know all about what we've been up to prior to our arrival. Strangely enough there were quite a few Guinness Drays knocking around, not only was it an amazing reception it was an incredibly sociable stop over. Fuelled in some part by a number of crew from previous legs making the pilgrimage to join in the final stopover. I think my liver is quite pleased to be back at sea.

An example of the generosity and support that was very typical of what we experienced was when we hosted a pub quiz and in the space of the afternoon the team, under Sara’s leadership, went round a number of shops and businesses looking for raffle prizes. The result was overwhelming and also allowed us to auction three top level experiences which helped us raise £8,000 for Unicef on the evening of the pub quiz. Just incredible!

It is the beginning of the end, with very mixed emotions on the boat as within five days of being at sea we will be back in London and the race will have concluded. Five days- just one more day at sea than when the crew get on their Level 2 training. I hope some of you have thought about your exit strategies as the race comes to an end, the Race Viewer goes into hibernation for a year along with the conclusion of the skipper blogs. Granny Lakes, what are you going to do with all your additional spare time? William McBride, at least you're not going to have an emotional rollercoaster reading about your daughter. Finally, Theresa of St Joseph’s and St Gregory’s Catholic Primary School, who made a very clever forensic link from one of my blogs, how are you going to exercise the grey matter over the forthcoming months?

As I said there are mixed emotions on Seattle at this time, but there is a common purpose. There is a buzz and focus amongst the crew to show that our race across the North Atlantic was not a one off but there is resilience within the team to improve that performance. We have just over 850nm to prove it

Today it's National Merry Go Round Day, hope that doesn't leave you in a spin. Not sure there'll be any Race Finish, but we'll find out in five days.

Standing by this Channel