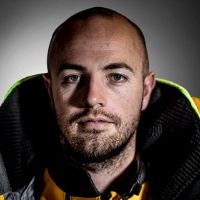 As foretold in the wind (and by Ian's blog yesterday morning), the last 24 hours have been pretty action packed aboard the good ship Unicef. It all started early, with the 'crossing of the line' at around 0230 UTC in the morning. As the excitement built in the run up (down), surely we're heading south to the actual crossing! Talk was dominated by the crew predictions of the actual minute. Congratulations to John Dawson who won the pot, but it was not without its controversy, with lots of discussion about whether people's entries were in UTC or 'boat time'. Boat time moves as we travel around the world, in order to keep meal times and watch changeovers aligned with local sunrise and sunset and is currently one hour behind UTC.

A brief cheer accompanied the actual event, together with a bit of a photo frenzy as we watched in the Nav Station and on deck as the GPS plotter tick over from north to south. Then we could return to the serious business of racing under stunning starlight skies across flat seas with the boat humming to itself like a contented tabby cat. It was actually the wind in the rigging, but its not usually that loud, so were sticking to our story.

With the dawn came proper preparations for the visit of King Neptune. As you will have no doubt read in other blogs and elsewhere, this is a pretty big thing aboard a ship and for the poor Pollywogs involved. And the on board recreations department - Sophie, Angie, Sandra, Danny, Joe, and Holly - did the most extraordinary job of making props and preparing the scene. I personally didn't see much of what happened, as my view was impeded by the most extraordinary white wig and beard, but I heard the hugely amusing list of 'crimes' being read out, the pitiful attempts of the defense counsel to argue mitigating circumstances, and the administration of penance to Neptune in the form of custard, porridge, kitchen scraps, and bad haircuts! Much hilarity, with the end result being a crew of 'trusty Shellbacks', ready to take on the next stage of our epic adventure.

The next stage being a clean-up of the deck, of course, but that done, our charge across the southerly Trade Winds continued with a round of cold cans of coke, some ever deepening suntans, and some vain attempts to convince our american crew mate Holly that 'pinch and a punch, the first of the month' is actually a real thing and not just a violent attack. We have also been avoiding 'bombing raids' from two trailing red footed boobies, slightly haughty birds, that ride the boats pressure wave and look down with a detached air whilst keeping up a ceaseless vigil for flying fish triggered by the passing blue hull.

Racing is really tight, with Zhuhai, ourselves, and Seattle literally neck and neck - although not in sight. As we run from one six hourly position report to the next, we are trying to see if we had been able to seek out the smallest of gains.

Next stop, the Dell Latitude Rugged Ocean Sprint, which we should enter later today.