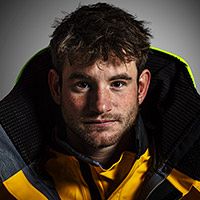 Progress is being made! Over the last 48hrs we have seen many of the sails in our wardrobe, as we made our way to the eastern gates between Inagua and the Turks and Caicos islands. Unfortunately all under darkness so no island spotting for us, places to visit on another sailing adventure! The crew have been sailing the boat incredibly well, executing the many sail changes I ask of them without a single mistake. My outlook is the boat that makes the least mistakes will surely be successful both in speed and workload on the crew.

The topic of conversation for the day has been: “Where is Visit Sanya, China?” Having our closest rival in Stealth Mode has sharpened our senses and had us occasionally looking over our shoulders, they just popped out of Stealth Mode close to our western side biting at our heels with a faster speed than us! Well done Mike, Mary and Team. Now it’s too early to confirm but we believe we may have taken first place through the Scoring Gate, closely followed by Visit Sanya, China. In an early celebration Kaz and Rachael cooked a wonderful sponge cake now named 'Gate Cake' which was enjoyed by all as we loaded the last position report, crew crowded around the Nav station PC to see the update!

Since Seattle, the crew on this boat have come on leaps and bounds, they are now confident sailors and have adapted to life at sea. John Sheppard is my favourite story; he joined us and found his first week tough, wondering why he signed up for this crazy adventure. He hated pasta and took a while to adjust to living day and night on the move with the busy hustle and bustle that you find on a Clipper 70. Now he is Pirate John, buff secured around forehead, pasta eating machine, jumping on any task thrown at him, asking questions and generally found laughing with the rest of our funny bunch of crew.

Onwards we sail with less than 600 nm to go. Bermuda and cold beers await us!

Dan, Ineke and the crew of WTC Logistics 'OUT'