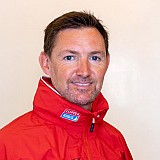 Apart from looking forward to some exhilarating sailing in big seas, part of my wish when signing up for the Clipper Race was to have some new adventures. It hasn’t disappointed. I have pretty much managed to explore each of the outer limits of the boat. It started during training, days before the race started when I found myself skin diving down 10 metres to where the anchor line was snagged around rocks. It was a bit extreme for me because previously I had opted to take air with me in SCUBA tanks but I thought I’d give it a go. A huge cheer went up from the boat when I returned holding the freed anchor line.

Some time later my sewing skills were to be put to the test but had to develop rather quickly from classroom level to a more extreme level when I found myself sat perched upon the rope that is the tack line. This is the line running forward to hold the large spinnaker at the bow of the boat and hover taught about six inches above the front of the bowsprit like a tightrope. My task was to sew some whipping onto the tack line to avoid chafe and this required me to perch my butt on said line whilst doing it. Ironically it was only the boat’s tackle who avoided chafe as my experience sitting straddling the tack line bouncing viciously at the behest of the dancing spinnaker felt rather more like elephant-sized flossing! I must suggest to the school where I learnt my sail repair skills last year that they improve the realism of their training and move the classroom environment to somewhere altogether more realistic...like a circus tent?

Now, having signed up to the extreme sewing club, my next entry was to involve sitting at the top of the mast carrying out some maintenance to the spinnaker bearings and then splicing and whipping a new safety donut through the bearing block. Obviously not while attached to Terra Firma! It had to be out at sea incorporating a bit of oceanic wave action. Rocking like a giant 95ft human metronome is a way more rewarding backdrop to sewing.

Yesterday, during the exercise to reduce the size of our mainsail – called reefing – the reefing lines for Reef 2 and Reef 3 had decided to dance around in the wind and knot themselves together and despite valiant attempts to persuade them otherwise they couldn’t be parted. It’s ok, I thought, I’ll offer to go to untie them. The only problem is that they are situated at the end of the boom. Oh, the other problem was that we were sailing rather rapidly downwind and the boom was fixed way out to the port side of the boat. Out over the ocean waves. Well so far I had explored beneath our yacht, above our yacht and in front of our yacht. Why wouldn’t I jump at the chance to see our yacht side on? At the point I volunteered my skills to the Skipper for the day’s challenge I was only half expecting to be allowed to try…I suspected the Force 9 “Strong Gale” winds and associated waves might preclude my offer. So there I am 20 minutes later with a harness attached to my butt (hah, no chafe this time!), a helmet keeping my hair neat and I’m climbing my way up to the boom to head outboard to get my new visual perspective of CV27 Dare To Lead.

I can report back that it’s a rather surreal feeling crawling away from your racing yacht which you’re attached to, healing over in 45 knot winds and crashing through 4 to 5 metre high waves along a pseudo gymnastic high beam. It’s an awesome view though. Luckily, my recently discovered extreme sewing skills were transferable skills. Who knew?! I have now successfully joined the extreme knitting club. Thanks to these new found knitting skills our reefing lines are now free to run once more.

I must speak to my training school about moving the classroom to an Olympic gymnasium...