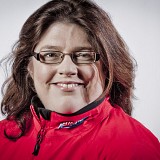 Time – Who knows? It's light at midnight, is that normal?

So after three years of planning, direct debits and making childcare arrangements, the day of Race Start finally arrived somewhere off the coast of New York. We spent the morning doing refresher training, hardly seeing any of the other boats at all. Then just before 1400 the full compliment of eleven yachts arrived and lined up. Only to be told race start was delayed an hour, so we had a lie down in the sun on deck watching Nasdaq fly a kite from their stern (an actual kite, of the type much beloved by small children, not a spinnaker!)

We did wonder what the solitary fishing vessel in the area must have thought when suddenly all these yachts turn up out of nowhere and lined up in close order. It's an impressive sight and I think we were all a little emotional. For those who have been on the line many times round the world, it's the first step in the journey home on the last leg, and for those of us who have just joined the boat, it's what we've been waiting for, for a very long time.

Clearly there is no stress involved in getting the head sails up as quickly as possible, and trying really hard to avoid messing it up in any way. Still, it's hard to get grinding as fast as you can, as if your life depended on it, wrong I guess. What the fleet hadn't prepared for was the large audience that attended, who seemed to want to get involved and didn't want to watch from the sidelines.

We're not sure how many whales came past in the first half an hour or so of racing, but lots of yachts had to take evasive action, including us, and some boats were treated to an impressive show of tail slaps and leaps out of the water. I half expected at to have to have someone on the bow at some point in our journey keeping a look out for icebergs (apparently we will be passing North of where the Titanic sank!) but the entire crew had to be keeping a look out for whales as we were surrounded by them!

Phil had his game face on, totally focused on helming, with our lovely new mate Scottie trimming everything in sight to try and gain a little extra speed. For the rest of us, it's a life of trim, grind & ease but with broad grins and repeated calls to the helm to find out how fast we're going. (“Can we go any faster?” apparently comes long before “Are we nearly there yet?”)

The other thing that happened at race start is that Skipper Dave decided to put the boat on UTC time. This meant we immediately leapt ahead in time by 4 hours. (They say time flies when you're having fun?!) So it was still daylight when those of us on Jack Watch (Jon, David, Nicola, Phil, Max, Tessa, Ross & myself) got up for the midnight til 0400 watch, it was still dark at breakfast time at 0700 and it was only just getting light when we started making lunch. So we're totally confused by whether it's day or night, whether we're supposed to be having breakfast or dinner, and what day is it anyway?

Random question for the day – could we make the boat go faster by putting people in the pants of power and having them hike out over the side? (Spot the dinghy sailors amongst the crew!) Funnily enough Dave doesn't seem very keen on letting us try this!

Much love to my family back home, sorry I haven't checked emails yet, I've been a bit busy!

Big shout out to my boys Michael & Bob and everyone else at Magdalen Academy. I know you're following us closely. Keep watching, we've got a plan! ;)

Keep smiling everyone - we are :)