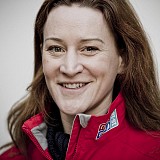 After a period at sea, you slowly adapt to the sounds and movements of the boat; these are the background murmur of everyday life, hardly registered at a conscious level.

During the off watch today, I was dozing on my bunk. I began to awaken uneasily just after 5pm, with a nagging sensation tugging at the corner of my mind, something not quite normal in the rocking of the boat. Before I had time to process this, there was a loud cry down the corridor: 'All hands on deck!'. It is difficult to describe the power these words; it's such a cliched phrase, but in real life it has the power to jolt you awake with a sickening rush of adrenaline and a flood of disaster images.

A scramble for life jackets, panicked looks exchanged, a rush to get on deck. Today, fortunately, the crisis was relatively minor and quickly controlled. A block at the top of the mast had given way, plunging the spinnaker into the sea. Imagine a sheet of material literally the size of a tennis court; then imagine the weight of it wet, then dragged backwards by movement and power of the sea - it took our combined efforts to get it safely back aboard, and certainly the repairs will be going on for a while.

These occasional moments of peak excitement aside, life has very much settled into a regular routine, merging into one long continuum: helming, sail changes, trimming above deck; cleaning, maintenance , eating and sleeping below. Work time, social time, down time all happen in the same space with the same people. The watches blur into each other, and units of time which are important in life ashore, the days and the weeks, become irrelevant. Our references are what happened in the last watch, or the one before; whether this corresponds to today, yesterday, or several days ago, no one quite knows.

Collectively we have 'watch amnesia', as James aptly puts it. We do have markers which equate to the outside world, but they feel a bit arbitrary: it is day 13 aboard today, because we take our food for meals from a bag labelled 'Day 13'; it's a Sunday because Gordon and Nicholas were cooking, and they are down on the rota to cook on Sunday (and what a great job they did, by the way!). The units which have importance to us are now equally those of distance as time: how far have we come; how many miles did we sail in the past hour; how far to the next Clipper boat, to Cape Verde, to the equator, to Rio...?

In this enclosed little world of ours, we are beginning more and more to act as a large family, (or probably more accurately, student dorm mates). There are queues for the toilets, one person left their shoes in the galley (common living area), another forgot to replace the toilet roll when it ran out... I may not know some of the most basic details - where my fellow crew members are from or what they do - but I know who gets upset by smelly feet, who picks raisins out of their food, who's likely to throw out the best one liners. We're also developing a certain line of common humour, we lend and borrow from our limited resources, providing sympathetic ears, and cheering each other on.

Many of you will be reading this on a Monday morning, waking up and going into work, slowly transitioning from the weekend. For us, we're probably going on watch or off watch, as we have done every few hours since starting the voyage. But rest assured that as you are thinking of us, we're also thinking of you. Have a good week!