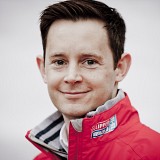 We are in the West Mariana Basin in the Philippine Sea heading for Batan. The course extension has caused some mixed emotions on the boat and made Happy Hour slightly less happy. Overall the moral on the boat is good and we are still in a race mode focused on working are way up the fleet. Port watch have our own competition to see who can get the best boat speed and with the excellent downwind spinnaker coaching on the helm from James and Nicholas, I feel that I could be in with a chance of being on the leaderboard.

After the crew spending the last two weeks discussing the weather you will be pleased to know we are now in the Northern Hemisphere, Neptune paid us a visit on the happy hour following the Equator crossing. The weather conditions are improving so hopefully the odour will become less funky. I can't believe that I would look forward to my days on surface wipe down so that we had a pine fresh smell on board rather than the salt sea dog sweat odour. The crew are now using the fresh water shower which gives you at least 10 minutes relief from the itchy skin and turns you into a walking air freshener.

Each crew member on watch is required to perform duties each watch change, some are nicer than others for example the log gives you time each hour to check the course, explore the charts and come down out of the sun. On the opposite scale you have the bilges and heads which require you to get down and dirty with the boat but there is a real satisfaction when the task is complete.

This week Richard and I won the Delia award for a breakfast treat of pancakes with maple syrup and a after eight (dinner) treat of Weetabix soaked in maple syrup, baked for 10mins and then coated with melted Nutella and dark chocolate, sprinkled with coconut and left in the freezer to set. Thank you to all the crew for your votes. Next request has been for fruit scones.

On the sailing side we have had a number of exciting days caused by some silly mistakes but after spending a week in the doldrums we were happy to be active again. After pro-actively spotting a rip in the clew of our medium weight spinnaker we dropped the sail but it got tangled in the anti-wrap net.

Once this was down we launched the heavyweight but the final checks prior to hoisting missed a thumb not in the active sheet.

We hoisted and then the boat heeled over and was heading for a broach when we blew the tack. Unfortunately this ended with another rip in the tack of the heavyweight. So we switched to the Yankee 1 and spent our off watch time repairing the sails. Our legend of the week award goes to Denise for spending hours sewing the sails back together.

Now I have settled into the watch system and found my sea legs it is great spending time in the evenings on the foredeck gazing at the stars and depending on the watch timings you see different constellations. The most common ones are Orion, Gemini and Pegasus (plough or big dipper).

At happy hour today we will be putting the clocks back so we will be moving to UTC + 9 hours. Signing off now for some more helming and trimming to make the boat go faster!

Love to all at home supporting us on the race :)