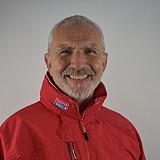 I came aboard Punta del Este for the final time in this race, the Foyle current already rushing out to sea and wanting to carry us in its hurried wavelets. A final wave from the hundreds of onlookers and supporters, and from us back to them: children’s faces pressed between the bars of the dock fence, their tiny hands waving flags at us, adults huddling under umbrellas, sheltering from the impending rain, all wishing us well on the last leg of the race.

Out in the channel, Punta del Este slipped effortlessly through the widening bay, a bow wave thrown aside, white foam dissolving in turquoise water. And then the exciting dash of all the boats for a gunned start, the water mad with confusion, the birds stirring to get out of the way from their watery perch, and we were off.

A clean start, short tacks upwind with full sails to round the windward mark, sails lit up by the sun sneaking under the edge of the thunder clouds, then a perfectly timed drop of the staysail, and as we rounded the second windward mark, a perfectly executed spinnaker set and a jump start on the fleet out of the gate.

And then the wind died. The water flattened itself out. Our boat drifted, searching for each breath of air. Once clear of the Cape, we waited helplessly as long swells lifted and rocked us gently, a seemingly benign memory from a storm far off shore in the Atlantic. We were all thankful to feel the wind on our faces when it filled in, the boat slightly heeling, the sails tightening under pressure, and the quiet acceleration northwards. A nervous energy gripped us, because we also knew that this was the start of a possibly messy upwind leg, life at 45 degrees and bigger waves to come.

Watching the waves build, I was taken back to my high school physics class , the teacher using a water tank with a sloped base to demonstrate the birth of a wave injected with energy, the mathematics of amplitude and period of summation and dissipation as the wave either crested on the slope, dissolved further away, battled against or joined forces with other waves.

We were floating in this now, at the mercy of an energy that had been created thousands of miles from here, and caressed along its way by the firm weight of air or stirred into a swirling rage by moisture lifted thousands of feet from its belly. It was just such a meteorological depression that was now descending upon us, the isobar lines compressed together on the navigation computer screen, coloured red as if more warning was really needed, all predicting a messy night ahead.

As good a science is in the living ocean, it can only give a reasonable estimate of what we are in. The computer models that need to account for the waves generated by atmospheric blasts, and by ocean currents running headlong into them, adding in the complexities of thermal shifts, water depth and contour, tidal movements, and the length of fetch the waves have time to travel before they meet an object are still just predictions. Here, at night in the North Atlantic, each wave was its own beast, born and then pummelled and scarred from myriad encounters with other waves, crashing against rocks, piers and ships’ hulls, reversing and then going to battle again in another direction.

Butted head-on by the pull of the moon on the sea, the weight of an ocean rocking itself against headland and bay, squeezing itself between islands and mainland. Each whale breaching somewhere in the vast water, each gannet diving for its prey in the black expanse, and each fish thrashing out its dance of death, all adding to an immensely complex equation that was becoming as random as anything could be. And we were deep in it, the boat itself adding its own energy to the waves, the bow diving under the water and tossing it back over us all like a girl playfully tossing her hair. Heeling over so our leeward rail was buried in a surf wave cut by the sharp hull, the windward rudder helplessly floundering out of the sea like a dangling earring.

Wave after wave of nausea descended on the crew, one after another grey from the unpredictable motion. The boat lurching, twisting, bucking and smashing abruptly down on the sea before being blind-sided by another wave. The galley had become an impossible place to cook, although we tried, one hand buttering toast for those who could still eat, the other reflexively grabbing at a bowl suddenly airborne and threatening to coat the interior or oneself. Our bunks, adjusted for the bizarre angle of living space, became a refuge once we were off watch.

If there’s one thing this boat has learned during the 42,000 miles of crossing waves too many to count, is that nothing stays the same, the calm will eventually turn into a gale, and the storm like what we were in will soon blow itself out, the waves that build up to nine metres or more will settle back down and once again the ocean will smooth out her dress and make herself presentable as if her mad rage had never happened.

My physics class never prepared me for this. And I wouldn’t change it for the world.

My deepest love to my wife, Deb, sailing somewhere near me, and to my wonderful children and grandchildren back home who have supported me in this from the beginning, and to the rest of my family who planted the seed to do this in my childhood. See you all very soon.