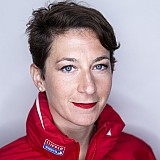 Today we were supposed to be celebrating our Southern Ocean crossing at the Prizegiving ceremony in Fremantle. But tomorrow instead will be our day 30 at sea with another 1,167nm to go. It will probably be the longest leg of my Round the World Race – longer than the Pacific crossing. Over a month at sea, with 20 strangers, sailing amateurs with no personal space, hygiene or access to the outside world. It is everything you’d imagine. Add to this many injuries, lack of sleep and strong political views and it’s a mess (imagine not being able to walk away from that Brexit conversation!). But, but, but somehow it works – it really does. It was tempting to write yet another blog about resilience, dealing with the unexpected and how we’re all trying to make the best of the situation. But I write enough about it on my Facebook page (search PAGE: Sandra Marichal Official) and on my Instagram @sandramarichalofficial – and in all honesty, if I keep writing about it, I’m going to lose it. So instead, I’d like to shine some light of something we don’t think about much, either on land or on a boat (especially if everything goes to plan) – sustainability.

Yes, the big S word. To sustain. When you’re on a boat, this concept becomes the basis on which you plan your crossing. Everything is designed, organised, purchased, made and stored so that we don’t miss anything. Funny how ‘missing something’ has become an obsolete concept in the developed world. Most of the time if something is missing, lacking or broken, we’ll go and get more. We go to the shop, open the tap or flip the switch. Food, water, electricity – all exist in abundance for most of us in the western world. How lucky.

On a boat, it is similar – we stock food, make water via desalination and use energy to make electricity which powers our lights, instruments and watermaker. Until we run out. Now, luckily we haven’t run out on CV31 yet but because we’ve been at sea for an unexpectedly long time, we started thinking about rationing some of our fundamentals: gas, fuel, milk (remember we’re on a British boat – loads of tea). Even if it sounds like the best and most rational thing to do on paper – practically it triggers some strategic decisions to be made and requires collective consensus.

A perfect example: we have fuel. We want to get to Fremantle as fast as possible. But we’re stuck in a wind hole 1,200nm away from Australia. We know there’s likely to be another wind hole somewhere closer to Fremantle. We also know we need fuel in case something happens and of course, we need to keep enough to run the generator and water maker. So: should we motor now or not? If we motor, do we start now or after most of the wind hole has passed and how long for? And how much do we trust the forecasts to make a decision that will ultimately impact our livelihood? Tricky, isn’t it? Luckily, that decision is made by our Skipper and AQP, so at least it makes the process faster. But it’s not always that easy.

Take another example: gas. We have four bottles. We consume about a bottle per week. When it’s cold the propane burns less efficiently and we need more to get the water boiling or the oven warm. That means we consume more gas and need more hot drinks. So the question is how much do we ration hot drinks vs meals? How many hot drinks should we serve during cold night watches? How many kettles should we boil? Should we reduce the size of the mugs? How can we control consumption? Who’s checking we’re not using too much? How do we keep it fair? And who forgot to turn the gas bottle off? Now, as you can imagine, these sorts of questions trigger all sorts of funny housekeeping conversations – of which I have pulled away very quickly.

But it shows one important thing – when our resources are finite, suddenly everyone cares about saving them – it becomes a deeply personal matter, our survival depends on it. The good news is that we’ve managed to collectively agree on the gas saving situation so much so that we will probably have a lot left as we get into Freo. But it makes me wonder – if finding a consensus to preserve our resources is achievable by 20 strangers on a boat in the middle of nowhere - why can’t we seem to do it outside of this boat for our planet?