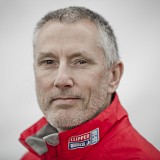 "Right, I'll take the helm," said Big Skipper Jim. I wasn't disappointed, but I did wonder how he was going to get up to it as the boat lay on its side and the deck was vertical. Somehow he scrambled his way up to where I had wedged myself into the tubing behind the wheel, grabbed hold of the frame surrounding the helm, and hauled himself into position. I climbed out of the top side and looked down at the scene on the deck below me.

Before I go on, I have to say that no crew member was hurt in the making of this story.

The mainsail lay on the water, the hull sat proud but side-on, and the entire crew except for Jim and me were dangling on their safety lines or scrambling to haul themselves up towards the high side. It was like one of those Mordillo cartoons, but I didn't laugh because this was only the second broach I'd experienced, the other one having been only a few minutes before - but that's another story.

"Rig the lazy sheet for recovery," shouted Jim. Everyone was looking at each other wondering how on earth they were going to do that while dangling beside the deck face.

We'd been attempting to hoist a spinnaker. I was at the helm. A gust took the unpopped spinnaker and dragged the whole quivering, quaking, three-legged spider, from its bag and into the water. As the sweaters worked on getting the halyard up as fast as possible, the wind took the spinnaker high into the air and pulled us sideways with such leverage from the top of the mast, that the boat leant over to 45 degrees. As I struggled to steer it away from the broach, one of the rudders lifted clear of the water and I felt my control of the boat drain from the wheel as a wave caught up with us and finished the job of tipping us on our side. That's when Big Jim stepped in.

After the lazy sheet had been brought through the "letterbox" -- the gap between the bottom of the mainsail and the boom underneath it - and put on a winch, we set about the process of recovering the spinnaker as normal. Grinders whirring, arms reaching, hands pulling, sailcloth bunched and gathered close to bodies before feeding back to be shoved downstairs. The rest of the recovery was pretty routine by comparison with what had just happened.

The decision to raise the spinnaker had been taken at first light in marginal conditions, and hadn't paid off. But this is what happens when you're fighting to not come last in a race that has already been won by four days. Make no mistake: we may be at the rear of the pack, but we're still motivated; we're still competing.

See you in Rio