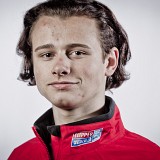 It's hard to say all we've done in the past few days so it's easier to say what we haven't done...stopped. Since race start we've experienced, in no particular order, a wind hole, spinnaker angles, over 100 dolphins at once jumping and clearing the water by at least 4 metres, many fishing boats, more fishing nets, crashing waves, a blown staysail, our second storm jib outing to my knowledge, vicious upwind beating, a shark, a bird landing on deck, multiple flying fish both on deck and in the water AND... Bob said we've “seen our first 'wave' of the race”. Ok deep breath now.

So with all this excitement and busy folk it's really no wonder that your favourite blue boat in a big sea hasn't been transmitting it's regular capacity. However, I'll elaborate on some of those aforementioned things.

So “our first wave of the race” is how Bob described the breaker which blew our Staysail to smithereens. He did write about it in his skipper blog but I'm not sure he gave the full detail so here you go. After hearing the barstool-esque stories from the on watch crew, this wave was about halfway up the inner forestay and stretched at least the entire length of the boat; this I find very easy to believe as I was on my 8 hour sleep period at the time, difficult in these conditions, and the noise from the wave hitting the deck made me think it was about to cave in. Obviously, having signed up to do this leg for these exact conditions I whacked on my foulies and deck shoes and scrambled on deck with the storm jib which Mik and I had to wrestle from under the sail locker floorboards in rolling and crashing waves. Not easy. The guys on deck were so drilled and Paul so calm at the helm that hoisting the jib was fairly easy for the conditions and the Staysail was recovered with equal ease.

It's at this point that I'd like to note that due to the lunch hour falling on my half watch with Keith, or 'Keef' as he's sometimes known as, I started the first part of this blog about a week ago if not more. It's been difficult to do anything other than cooking, sleeping and doing my watch due to this intensely busy schedule and therefore, I've missed a few important dates along the way.

As it came first, happy Mother's Day to my Mum Deborah. You'll be happy to know we're roughly a day away now until the end of this race and I'm still in one piece. Somehow I think the best present I could give you now is to be home so you can finally stop worrying about me after almost a solid third of a year. Worry no more! Love you and see you soon mate.

Also, a big moment in my Dad Rob's life happened recently as he had yet another 21st birthday! How the time flies and yet your age stays the same! I hope you had a great day and someone else cooked for you; don't get any ideas from Mik's blog either, I'm no little chef. Love you too and hopefully I'll see you in Shanghai or Beijing else it's a bloody long walk home...and it'd be nice to see you of course.

So I can't say I'm not looking forward to going home to all of my creature comforts even though I'm no home baby but there are certain things that I'll definitely miss about life onboard and ashore in the Clipper Race life.

Firstly, I'll miss my watch. Whether it be Keith flipping from interesting conversation and wisdom to joking about like the court jester, Flic's sharp wit and cold one-liners, generally hiding a darker humour than her exterior would suggest or Seumas, as of late, seemingly training for the next Olympics doing shuttle runs between helm and head whilst joking in between and occasionally shouting “Eurekaaaa!!” from his new found and mutual love of Monty Python. The Fantastic Four have been amazing fun.

Equally, I'll miss the rest of the crew. Mik and Anne-Lise I found are not in any way morning people, however, learn how to make their coffees just right and they soon chirp up to be two of the funniest and hysterical people on the boat with some of the best music taste to match. Just please get that coffee right and they're top.

Ellie, speaking of hysterics, can make you laugh just by laughing. This means you end up laughing a lot because Ellie laughs...A LOT. It's genuinely infectious and I'll miss her cackle from the galley even when I'm trying to sleep.

Paul was my watch leader on Leg 4 and I'll miss his humour, especially his surprisingly comfortable camp voice which always comes out on Harry's favourite day of the week and offering to the boat, Man Love Thursday. Harry introduced the boat to this day in Airlie Beach and it's stuck like Tom to the mast on his first trip up, clinging like a baby chimp to its mother's back for dear life. Harry will be missed...as long as he has a cigarette in his hand.

Tom, I'll miss as he's a funny character. He's also not a morning person and only time, not a hot drink, can cure him before he settles into his relaxed way of life, occasionally taking time out of his day to dance to whatever tune may be in the galley. We both appreciate an 'absolute banger' when we hear one and this is also reflected in his enthusiastic moves.

John and Laura, the only Roos on the boat currently, I'll miss due to their relationship. It's just nice to see two people enjoy each other's company so much and when you make either or even both of them laugh whilst snorting it's always satisfying.

Last but not least I'll miss Jimjam, or Mirjam and she's more formally known. I've sailed with Jimjam more than anyone else as I did my training levels 1 and 4 with her as well as being in my half watch on Leg 4 and obviously sailed on this Leg. I'm glad she picks up stuff better than most because it means throughout my sailing career, of which she's witnessed every single minute, she's been an excellent mentor and crew member.

These guys are the bee's knees, la crème de la crème and the dog's knackers all watched over by the always interesting and ever intriguing Bob 'Beggsy' Beggs. Bob has taught me a lot about sailing and life as well as how to deal with difficult scenarios. He has a story for everything and his wardrobe must be packed tighter than a can of sardines because he's got the T-shirt for every situation going. I hope he gets his post-Clipper Race trip to Antarctica he wants so dearly.

The second thing I'll miss is the nature. Dolphins, extraordinary clouds, incredible sunsets and sunrises, whales, sharks, flying fish, sunfish, shooting stars and the night sky and even some Australians! Fascinating to watch! I'll miss learning from people like Jeni on Leg 4 about the night sky and occasionally about clouds from Tom and Laura and Gavin the book of course. This leg especially has brought the full spectrum of conditions, hot and cold as well as high winds and those vicious wind holes.

I can't say I'll miss all parts of these conditions although strong winds, hanging onto guardrails and standing on winches to avoid falling has certainly been the best with surfing under kite a close second place.

The third, and maybe the most important thing I'll miss, is the sailing. I've found a love of sailing since my Level 1 through to where I am now approaching Qingdao after travelling over 15,000km from Freo. I never understood anything about sailing whatsoever and although I admit there's still a fair way to go until I can call myself an overwhelmingly competent sailor, I feel Clipper has put me on that track. I've found a home on the bow and an adoptive home at the helm where I've managed to, but also had to, adapt and hone a new skill on this leg due to the smaller watches and I can't say I've regretted it at all. Helming under spinnaker at night, however, is still a challenge for me. Light touches? Not so much.

Until, the future. Hooroo cobbers.