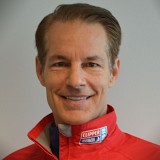 As we race on to Seattle, my previous struggles of being wet and cold during this voyage have recently been surpassed. We had four days of constant, cold rain, causing everything to get wet both inside and outside the boat.

Condensation drips everywhere, including falling on this keyboard as I type. The strong arctic wind coming from the north – with gusts up to 75 knots – makes eerie howls through the rigging. The wind simply lifts the water off the ocean and turns it into spray. The wind and spray then slice through our wet gloves and foul weather gear, freezing our hands and chilling all of us to the bone.

These cold conditions require the deck crew to rotate below at least every hour, but down below deck it isn't much better; you can see your breath as you talk, and steam rises from the toilet bowl. My boots have been soaked for weeks, and I have to wring my socks out after every use, even though I'm using plastic bags around my socks (I'm still perplexed how it soaks my socks so fast). In short, there is no escaping the North Pacific cold.

The other dynamic to contend with on board is that the ocean waves have gotten huge. They are 30- to 35-foot Pacific mountains of rolling swells that break into frothy, white combers. They are beautiful to see as they build up behind the boat, then come crashing down and around us, and then pass under us, leaving streaks of white water. Unfortunately, these beauties make life on board a real challenge as we are constantly getting knocked around. Plates and people constantly go flying.

I watched a pot of melted butter lift off the stove and go flying across the galley only to leave a complete mess on the wall and floor. Luckily it quickly froze, but poor Rachael, who had been attempting to make a cake, had to scrape it up. When getting dressed and undressed in the hallway beside my bunk, it’s an ongoing game of Ping-Pong. I first bang into one wall, and only seconds later, bang into the opposite wall. I'm now oddly grateful for cramped, narrow spaces.

The best thing about these big waves is the surfing contest. I had a blast yesterday helming for an hour, and managed a really long and fast ride slotted perfectly in the curl. Walls of water shot to the sides and a rooster tail followed us.

Later, we had another roaring blast down the hill and I claimed a new personal record of 29 knots. John – our normally good-looking and level-headed media liaison, who recently had the strange impulse to shave his head in honor of crossing the International Dateline – owns the boat, and apparently holds the current race record of 34.6 knots. That means we’re getting our 33-ton boat to accelerate to almost 40 miles per hour in less than 15 seconds!

So far our challenge has taken us 4,948 nautical miles across the North Pacific. As the Antarctic explorer Earnest Shackleton's family motto says: “By Endurance We Conquer.” See you in Seattle!