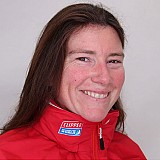 Kaz’s watch was on for the 3-7am watch without Kaz as she had been on mother the day before, when Ineke wanted to tack and then put a reef in straight away with the weather building swiftly. With only a small watch of five, myself, Paul, Sophie, Smita and Steve, I wasn't that hopeful that we could manage the reef with just two in the pit so we woke Kaz up to help. As soon as we tacked the wind built further and combining with the horrible sea state the call to get Rachel as well went out.

Paul and I headed the kiwi duo at the mast getting engulfed in waves even though Paul was above deck level. We managed to get the main down without too much bother and I sorted the handy billy and then went back to jump on a grinder and help in the pit.

Unfortunately with a skeleton crew during the tack we didn't get a guard position with the back stay (to protect us from the whipping of the Yankee sheet as it flogs) and we lost our tricing line. Seeing the Yankee sheet out of control I just put my head down while grinding the staysail sheet and hoped like hell I didn't get a rather forceful slap on the head but all was ok.

Shortly after the reef we noticed the boat with plants inside we had been given on arrival in Derry had come unstuck from its spot by the vang and had drifted upside down to the low side and was trying to exit to the sea. We did manage to save the boat but not the plants. I’m sorry to the local school that had made it but we did manage to save the boat. It was a little more hectic on deck than we expected.

After all this chaos I went down below to start my mother watch with Jas. Oh it was bad, worse than you can imagine. At one point there were probably five crew simultaneously throwing up including both Jas and myself! I had to laugh at how ridiculous it all was and Jas wasn't sure if I was crying or laughing, it was a mixture of both I think.

There was also a cornflake incident when two entire tubs of cereal levitated off the galley onto the low side where the very ill Lucio was pretty much passed out on. He was then covered in cornflakes and shredded wheat, but many saw the horror scene and thought that the cornflakes had come from Lucio, thank god they hadn't!

Only around five people ate breakfast and around eight or nine for lunch which was simplified from a crowd favourite of hamburgers to toast. Rachel did myself and Jas a massive favour and finished the dishes and cleaning up the cereal horror scene as Jas and I both had to head to bed.

We all seemed to have lost our sea legs after being in Derry~Londonderry for so long. But it was an amazing stopover. We were treated so well and made to feel so welcome especially by the local mayor and for me in particular by the local rugby club where myself and fellow kiwis Paul and Dawn went to watch the All Blacks being beaten by Ireland in the 1st series defeat on New Zealand home soil in over 20 years. We also went back there for the touch rugby tournament one evening which was a great event with two WTC Logistics teams, a Punta del Este team and a Unicef team. The two WTC Logistics teams came 1st and 2nd and also won the tug of war! Thanks so much for having us and especially for my sunglasses that I was awarded for being a good sport. I haven't been able to wear them on the boat yet as it's been extra cloudy but as soon as the sun comes out I’ll get them out. Thanks again.

Well this is probably my last blog. What can I say… I never thought when I signed up that this would take three years to complete and at times I definitely doubted that I could physically or mentally do it, but I pushed through, through many injuries and tough moments. I’ve done four major kite repairs which all held up plus countless other small repairs. I made the over 20 knot club on the helm and helmed in over 50 knot winds in 8m+ waves. I’ve made countless friends who I look forward to keeping in touch with and seen some amazing sights at the stopovers and even more amazing sights on the boat, highlights being humpback whales broaching, albatrosses in the Southern Ocean, dolphins lit up by the phosphorescence and countless awe-inspiring sunsets and sunrises. If anyone is considering doing the Clipper Race then go for it, it will change your life, It’s certainly changed mine.

PS To my fellow RTW crew Paul, Rachel, Ben, Kaz and Dan, man have we been on one big adventure together. I can certainly say I couldn't have done it without you. Thank you. Who are we? WE ARE W-T-C!