The weather is often stereotyped as the go-to conversation of the British public but for sailors accurate forecasting, constant monitoring and discussions about the weather are a day to day necessity. Forecasted weather fronts, wind speeds and angles, will not only help determine the fastest route and optimal sail plan but also the safest passage.

Meteorology is a scientific field focused on the atmosphere of our planet, involving the movement of the air, layers of the atmosphere, and phenomena that occur in specific regions around the world. Race Crew and those who follow the Race Updates will be familiar with Clipper Race Meteorologist and all round weather guru, Simon Rowell. He is an integral part of the wider Clipper Race team, working with the Race Office behind the scenes to ensure the fleet has all the latest weather information not only to navigate the fastest route but to also enable the safety of the crew.

Mark Light, Clipper Race Director, said: “I have known Simon Rowell for almost 15 years. His experience and insight into, not only the maritime industry and global meteorology generally, but also the Clipper Race, is without parallel. He is hugely respected within the sailing world and a true larger than life gent. As Clipper Race Director, I am in regular contact with Simon when the fleet is racing across the oceans of the world, always looking at incoming weather systems, the race route and fleet progress, with the interests of the racing itself but more importantly, the safety of all our Race Crew.

“We are very fortunate to have Simon as an integral and operational part of our global sailing event.” 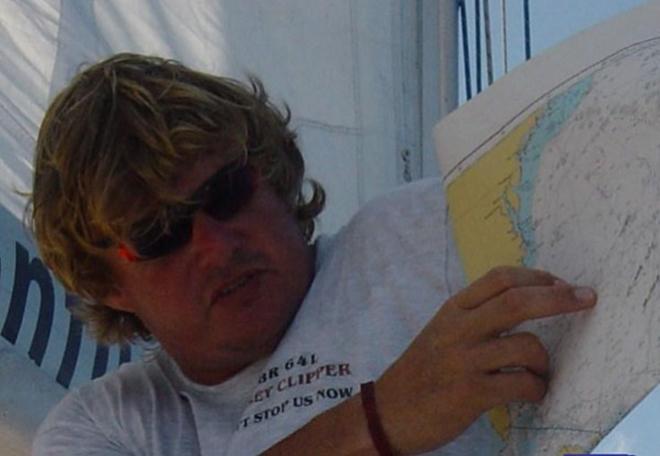 Ahead of each edition, Simon delivers an in depth and specific weather briefing based on the complete race route. And during racing, he provides the Race Office and Race Skippers with daily weather reports and forecasts and is also a valued and long term member of the Clipper Race Committee.

Simon has been a yachting professional since 1997, starting off as an instructor. He skippered the winning team in the 2002 edition of the Clipper Race, returning as Assistant Race Director for the 2005 edition. Since 2011 he has been the Meteorologist and Forecaster for the Clipper Race as well as the British Sailing Team since 2015 and forecasted for the Olympic Games and Paralypics in Rio de Janeiro. His other clients range from ocean rowers to TV production companies and is currently writing a book about, well, you guessed it, the weather.

So what goes into making sure the Clipper Race fleet has the necessary weather information they need during each race? Thanks to the AST Satellite Communications systems on board the skippers receive weather information daily from Simon. They use this to analyse the weather forecasts using the TimeZero by MaxSea navigation software, TZ Professional v4, to plan their best routing options and make tactical decisions over the coming days as the forecasts become more accurate. 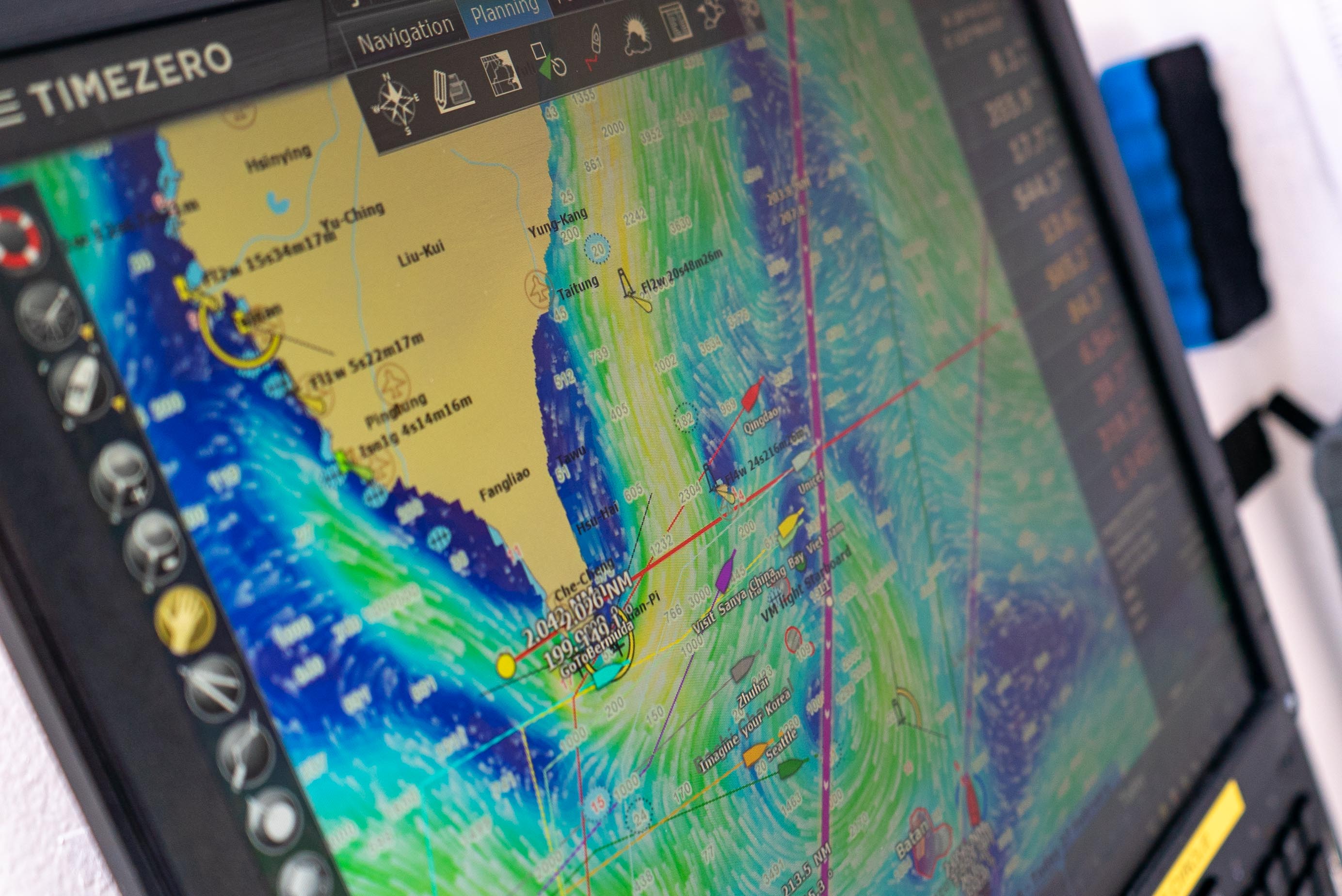 TimeZero navigation software in use on board

On an average day of racing Simon said: “I get the automatic and manual yacht position scheds from the Race Skippers and I plot them all onto my navigation software. I then download a large high resolution file and numerous satellite images of the area the fleet is in and then from that I will extract the smaller files that I send to the fleet.

“I send the skippers at least two GRIB (GRIdded Binary) files, one which gives a low resolution representation of the entire race route, so they can see what's happening big picture wise. I will also send a more detailed higher resolution GRIB file, just for where they are going to be for the next five days. This helps them plan their individual upcoming tactics.”

Example satellite image sent to the fleet on 7 January 2020

Due to the global route, Simon utilises many different external sources of information in order to provide the skippers with the information they need. No matter how accurate the source, however forecasts are just that, the best estimate, and so don’t always match up with the reality at a local level. Whilst on board, the skippers and crew have the equipment to monitor current wind speed, angles and more with the aid of the world leading Garmin marine electronics. With each Clipper 70 fitted with Garmin GPS navigation, radar and wind data technology, feeding into the Garmin instruments and chart plotter at the helm and in the nav station, the teams can compare the forecasted data to the changes in conditions they are currently facing and adjust their routing and tactics if needed. 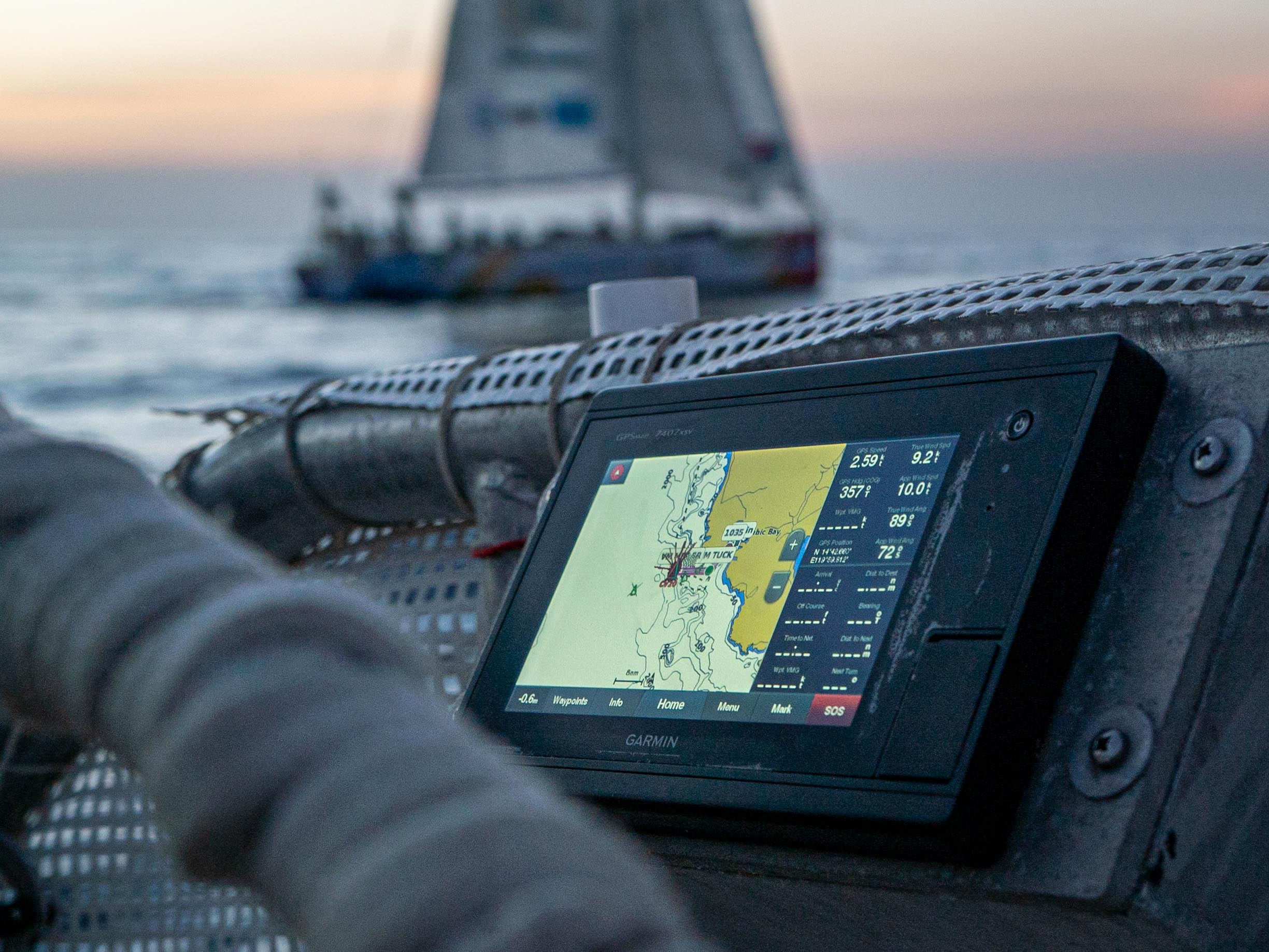 Garmin Chart Plotter at the helm of a Clipper 70

Simon continues: “As the fleet goes round the world it will come under different weather forecasting agencies, from the MET Office (UK, Europe and North Atlantic) to the Brazalian Navy, Australian Bureau of Meteorology to NOAA - the National Oceanic and Atmospheric Administration in the US. From agencies such as these I will pick up data like synoptic charts and other useful information. I also send satellite images, so the skippers can compare what the charts, models and GRIB data says versus what they are facing in reality.

“Though the really important thing is to always look out the window!”

And whilst ‘looking out the window’, the Clipper Race teams have also been engaging in research efforts, collaborating with UNESCO-IOC to deploy drifter buoys and training crew in the Voluntary Observing Ship Scheme (VOS) to collect ocean and weather data. Gathered data will be used in two ways; to instantly generate significantly improved accuracy in weather modelling at Earth’s most remote latitudes and to generate data for long-term climate studies. Completing the circle of weather data coming to and from the yachts.

Despite the amount of information and improvement in satellite communications since skippering in the 2002 edition, Simon still utilises his own experience of sailing round the world to inform his work with the skippers. Looking back on what weather data was available when he did the race, he said: “In 2002 we didn’t have weather centres, but what we did do was use an old fashioned fax that you could download over SSB radio. As we raced round, we picked up good informfax images of synoptic charts and even satellite images. I always go back to what I found useful when I try to think about what to send to the skippers on board.”

Having experienced some of the most extreme weather on the planet himself during his 11 month circumnavigation, on a final note, he added: “I have been working with the race in this capacity since 2011, it's really good fun. Every edition you get a new bunch of Race Skippers, First Mates and Race Crew to work with and there is always some good interaction both ways. And it's a whole lot easier supporting round the world from my shed in Cornwall than it is actually sailing round the world. This is a much gentler way of keeping involved.”