GREAT Britain crossed the finish line in the Stormhoek Race to the Cape of Storms to take Line Honours at 20.30 (22.30 local time) after crossing the 3,400 nautical miles South Atlantic leg in 14 days, two hours and 30 minutes.

Mission Performance crossed the finish line at 00:53 UTC at an elapsed time of 14 days 6 hours and 53 minutes.

Arriving into Cape Town, GREAT Britain Skipper, Peter Thornton says: "The tension was incredible in those last few miles. I must admit I was getting very worried because not only had we been neck and neck with Derry~Londonderry~Doire, Garmin and Mission Performance for the last 72 hours, but racing down towards Cape Town in the last closing hours it was just so close. Derry~Londonderry~Doire was just yards behind us again, a little bit like Race 1 so it could’ve been anybody’s race.

"It is a great sense of achievement for the crew and relief really because you really want to achieve a first arrival if you even have that hint of a possibility and achieving it is great.

"I’m hoping it’s not going to be like this for the rest of the race, it’s very exhausting! We are constantly looking at the AIS, looking at the speeds of the other competitors, looking over your shoulder or ahead of you trying to catch up. It's really amazing stuff." 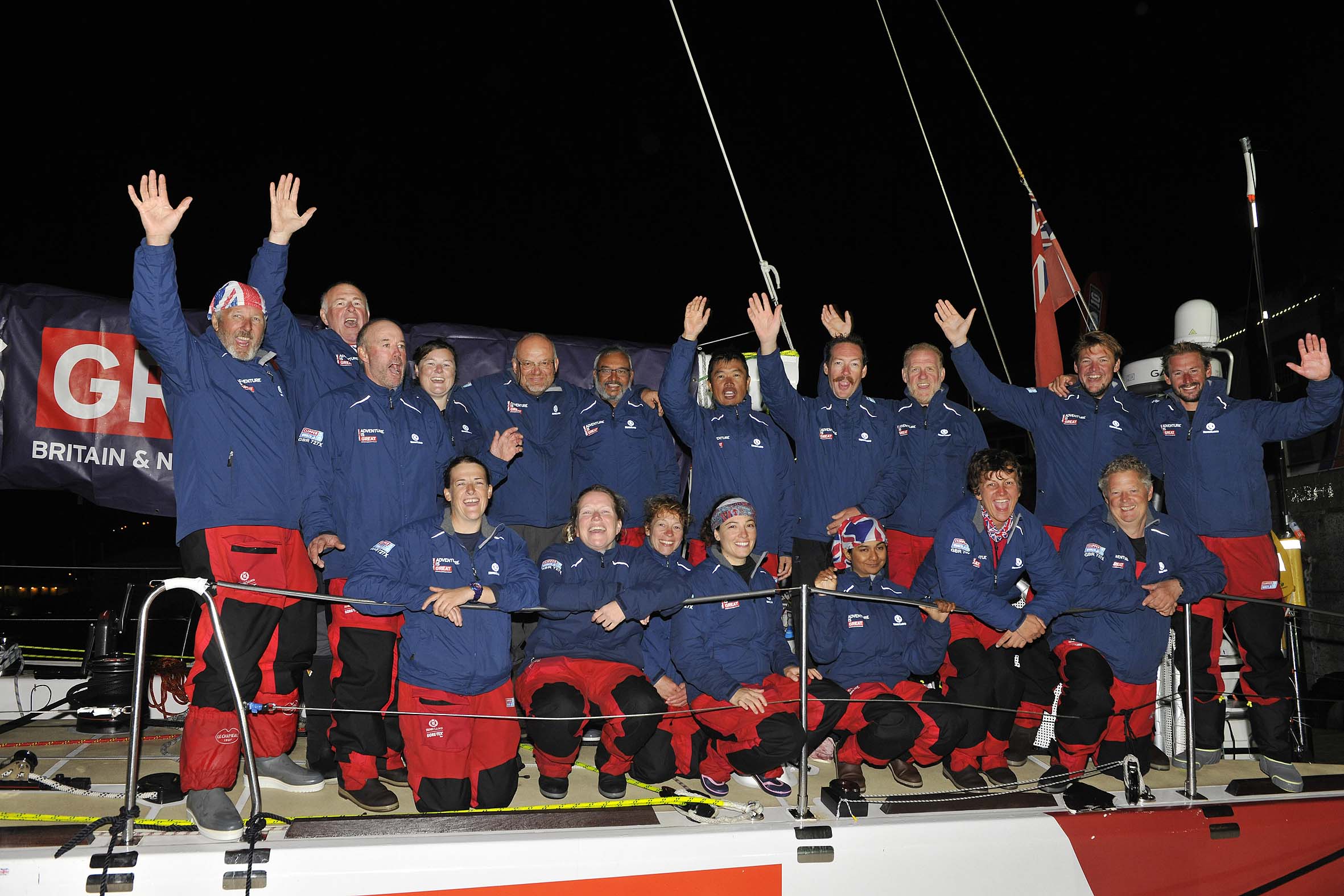 Stepping off the boat with his team, round the world crew member Sunil Prabhakar, a 59 year-old Business Owner from India and the first Indian to circumnavigate in the race says: "It’s been a very exciting and very challenging race, the last 24 hours have been very intense, we were not going to let anyone over take us, we did what we had to do. Everyone worked really hard to get here. The mood on board was of excitement and it still feels unreal that I have crossed two oceans as part of my circumnavigation.

"This was a very short and intense race and the weather was much more challenging than the race to Rio, we are building up for Race 3 across the Southern Ocean now.

"This experience is more than I expected, it has changed my life already and I am sure for many of my fellow crew mates too. We have a great crew, everyone has their down day but we all help each other get back on our feet and keep moving.

"My wife is coming out to Cape Town, it will be the first time I will have seen her since London and we are looking forward to exploring the city."

After a closely fought battle to the finish line with GREAT Britain and Garmin, Derry~Londonderry~Doire Skipper Daniel Smith says: "It’s been really tight for a couple of days now. Watching the weather on the way in it has been apparent the boats have been very close and the weather has been closing them together too. Over the last few days it’s been neck and neck with boats lining up alongside each other and it’s been a drag race to the finish.

"Table Bay is renowned for wind holes, one minute one boat is doing 10 knots, then a minute later doing 1 knot while another boat was sailing past it, very tricky. I am very proud of the whole team. We had the full extremes of weather, we had some very windy weather and they dug deep and fought hard, I am very proud. The results seem to be getting better, I think the team have learnt a lot and are working well together." 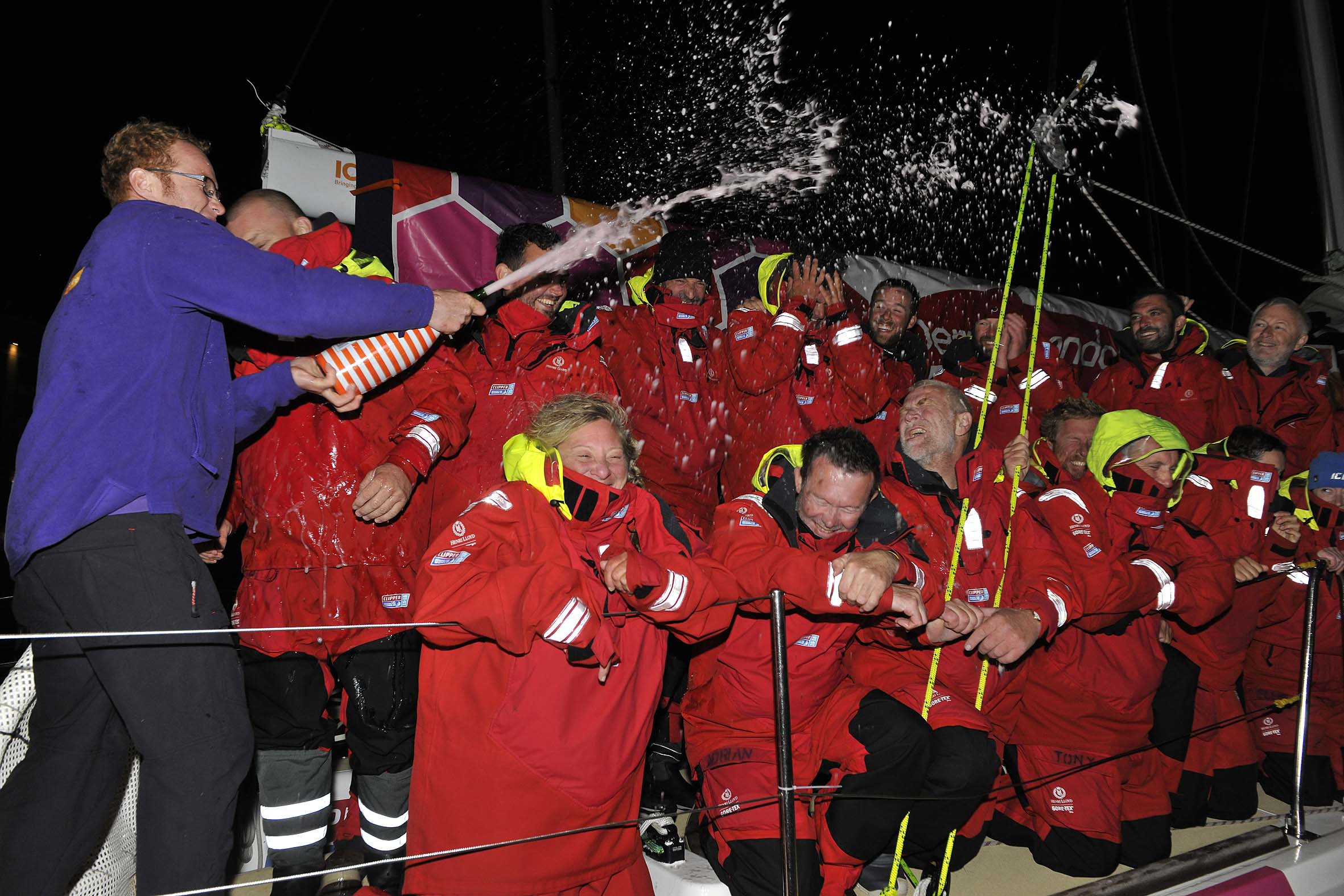 Diarmuid O'Donovan is a round the world crew member on Derry~Londonderry~Doire from County Kerry, Ireland. Diarmuid says: “It’s been a brilliant, great race, absolutely fabulous. It is very different to Race 1 which became a sweat box and you couldn’t sleep. On this race you have no problem sleeping because you are so tired after watch. It was very interesting sailing.

“It was tough sailing with very windy conditions and GREAT Britain popping up beside us didn’t help, but it was very interesting for a while there sailing under our spinnakers, they were following us and it’s just been a battle from the start. Unfortunately we came out the wrong side of it by a few minutes.

“It’s fabulous to arrive into Cape Town and have family here supporting us. I’ve been coming here for many years and I’ve always admired the sailing here.”

Garmin was the third team to arrive in Cape Town

Upon arrival into the V&A Waterfront Garmin Skipper Ashley Skett says: “It’s been a very, very tense race. The intensity mounted in the sprint up until we were 200 miles offshore, Derry~Londonderry~Doire and GREAT Britain came along and dropped their spinnakers, and we were all going in the same direction, then coming into Table Bay with the wind hole and the gusts. At one point it looked like we might be sneaking around the outside of Derry~Londonderry~Doire, at least maybe GREAT Britain we thought might get stuck out there, but unfortunately it didn’t work out that way.

“Although we led for a lot of the race, we never thought we had it in the bag. We were very confident that we had a decent enough lead to make it through until about two days ago and then we went into the wind hole that was forecast and there was no way around it at all. We had no option really but to go north or south, head into it and wait for the wind to build again. The rest of the fleet caught up and then it did build again just in time for them. It wasn’t great for us but we have proved we can hold our own and be competitive so I think that is something to take forward into the next race.

“We have a competitive bunch on board and we want to do well. We have set a winning mentality from the start and proved we can achieve. The first two races have given us a good base to build on that and get great results.” Garmin crew member Ross Ham is now two legs into his second circumnavigation having completed the Clipper 2013-14 Race. Ross from Brisbane, Australia says: “We’re lucky with Skipper Ash as he allows us to sail the boat and we’ve had some good results. We did get to the lead and I don’t think the word ‘weather’ plays well with the word Garmin at the moment. We feel we were somewhat short changed when we hit the wind holes and some boats sailed straight through the weather everyone was supposed to get.

“Sailing wise this second leg was a much improved version of the last edition of the race for me. I know from the last time that this race is truly a blur if you aren’t experienced and I’ve enjoyed it this time because there was no blur factor. It was fantastic. The result for the rest of the crew and the Skipper was a little disappointing but for me I just think racing in such close proximity for a long period of time and the effort of trying to get the result is fantastic. I will remember it for a long, long time.”

Mission Performance was the fourth team across the line at 0053 UTC (0253 local time). Skipper Greg Miller says: "It was an absolutely awesome race it had everything an ocean racer wants. It had light winds it had strong winds, heavy weather, light weather every kind of tactical situation you would want in an ocean race, it was brilliant. The crew loved it, learnt a massive amount from it and got a lot out of it and all the conditions that we had. "We tried to be at the front but kind of lost out towards the end as GREAT Britain and Derry~Londonderry~Doire caught up but we were holding our own and doing really well and that’s the way we want to continue really. The ‘Warriors’ are all working hard now and a lot better than they were in Race 1. They have learnt a lot more, taken more responsibility they know what needs to be done and when to do it."

This race is being run on an elapsed time basis to account for the late start of LMAX Exchange and Qingdao after repairs following damage caused outside of racing during the stopover in Brazil. They started 3 days 11 hours and ten minutes after the rest of the fleet.

If they finish after 0812 UTC (1012 local time) on Sunday 25 October they will not displace the first three teams to finish.

Final positions and points will be awarded on elapsed time.

The Clipper 2015-16 Race fleet is now berthed at the V&A Waterfront in Cape Town, South Africa.Click here for further information about Cape Town and the events during the fleet's stay.

Race 2, The Stormhoek Race to the Cape of Storms, is headed for a dramatic denouement, with Derry~Londonderry~Doire,…

The Clipper Race Committee has finalised the list of penalty points to be given to the teams following the assessment of damages and repairs that were needed after the fleet’s race from London to Rio in the Atlantic Trade Winds leg.These penalty points are awarded…

The Stormhoek Race to the Cape of Storms is set for an exciting finish, with frustrating winds and the wide…

​Race 2 Day 12: High pressure system off Africa the next challenge