​Race 13 Conditions - A tactical sprint from Bermuda to New York

Kicking off the start of the final leg of the Clipper 2019-20 Race is Race 13, a short sprint from the island paradise of Bermuda to New York, where crew will get to experience sailing into the city, past the Statue of Liberty, and will be one race closer to the finish line for the entire 2019-20 edition.

Race 13, will be a short sprint of approximately 700nm, and is expected to take around five days, with the yachts due to arrive in Liberty Landing Marina on 23-24 June. A short race in comparison to some of the ocean crossings, this tactical sprint will not feature a Scoring Gate or Ocean Sprint, and teams will also not have the option to go into Stealth Mode, meaning that it really is all to play for, and a highly competitive race is to be expected.

Following a Parade of Sail and Exhibition of Sailing at the Royal Bermuda Yacht Club and in the Great Sound, the race will commence by way of a Le Mans start. The fleet will wave goodbye to the locals and supporters cheering from the pontoon and motor to the start line, located around two hours off the coast of Bermuda and 2.5 miles southeast from St. George’s Lighthouse. The fleet will line up under engine, with an agreed sail plan, co-ordinated by a lead Skipper, and once the start gun goes, the teams will hoist the headsails, the racing to New York will begin.

Commenting on the race conditions ahead, Deputy Race Director Dale Smyth said: “The weather conditions between Bermuda and the US east coast are heavily influenced at this time of the year by the development of low pressure systems forming around Newfoundland. As these giant anti-clockwise systems form with their associated cold fronts, they start to travel eastwards. The low pressure systems will usually have moderate to strong south westerlies in the beginning stages giving the fleet fast reaching conditions. As the passage of the front travels over the fleet there would be a sudden veer into the North West usually amongst some rain and squalls, meaning that the yachts would need to face headwinds. Between these low pressure systems there is also a high chance of light fickle winds before the development of the next cycle, and even the possibility that the easterly trade winds push through the early sections of the course.” 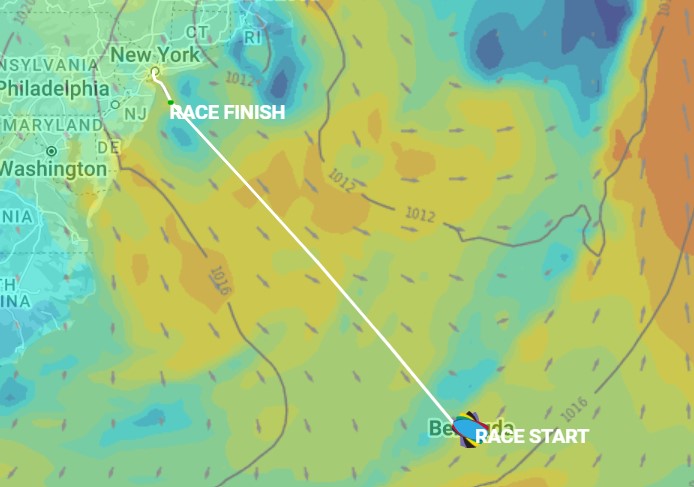 Dale concludes: “With these conditions, the race will make for some gripping watching on the Race Viewer, and it really is set to be a highly competitive race with little margin for error if teams want to get the top spots.”

Race 13 marks the start of the final leg of the race - Leg 8: The Atlantic Homecoming Leg. After battling an inspiring 37,200 nautical miles and five ocean crossings before arriving in New York, over the course of three years due to the pandemic, the final leg is set to be a competitive and emotional leg as teams battle it out on the final push to the final finish line.

Keep up to date with the action on the Race Viewer.