On the eighteenth day of racing in Race 2: The Commodore’s Cup, the leaderboard remains unchanged at the top, with the leading three teams all having passed the Dell Latitude Rugged Ocean Sprint finish line. All the other teams, bar Imagine you Korea, are now within the sprint phase of the race and are experiencing good sailing conditions on the whole, though some changeable wind conditions have resulted in some quick sail changes as they concentrate on the bonus points on offer.

Visit Sanya, China has cemented its position in first place, around 60 nautical miles ahead of Qingdao, while Ha Long Bay, Viet Nam is in third. Visit Sanya Skipper Seumas Kellock reported: “With the Yankee 1 up, we find ourselves overpowered with a continually building wind, and like a professional sailing squad, the crew went instantly from dropping the kite to putting a reef in without blinking, amazing work! But still, the wind got stronger and pushed us off course even without our spinnaker up.

“Next up was a headsail change, so down the Yankee 1 came and there it stayed. By this time we had 25-28 knots of true wind and in excess of 30 knots apparent. With only a staysail and reefed main, we were still making over 11 knots of boat speed so we tied the Yankee 1 down nice and tight and held on to enjoy the ride.”

With 56nm separating them, Qingdao Skipper Chris Brooks commented: “The gribs suggested it would pass through ahead of us but here we are in the howling winds. I'm uncertain how that will affect things, but today will be a little eye opener to see if the other boats face it too. My thoughts are that their wind direction will be largely unchanged. Still, when you develop a lead over the pack it's often you have to face different conditions to the rest.”

WTC Logistics Skipper Marke Burkes said: “Visit Sanya, China is really showing the fleet their heels as they continue to rip up the race track in front of us. In the meantime, we are now back on the pace with Zhuhai and Unicef and keen to get a march on Seattle and Punta del Este.”

Jeronimo Santos Gonzalez, Skipper on board Punta del Este reported: “We continue sailing the Trade Winds along the coast of Brazil, trimming and helming the fastest we can, all to get the best time in crossing the Dell Latitude Rugged Ocean Sprint and potentially getting those extra points.” 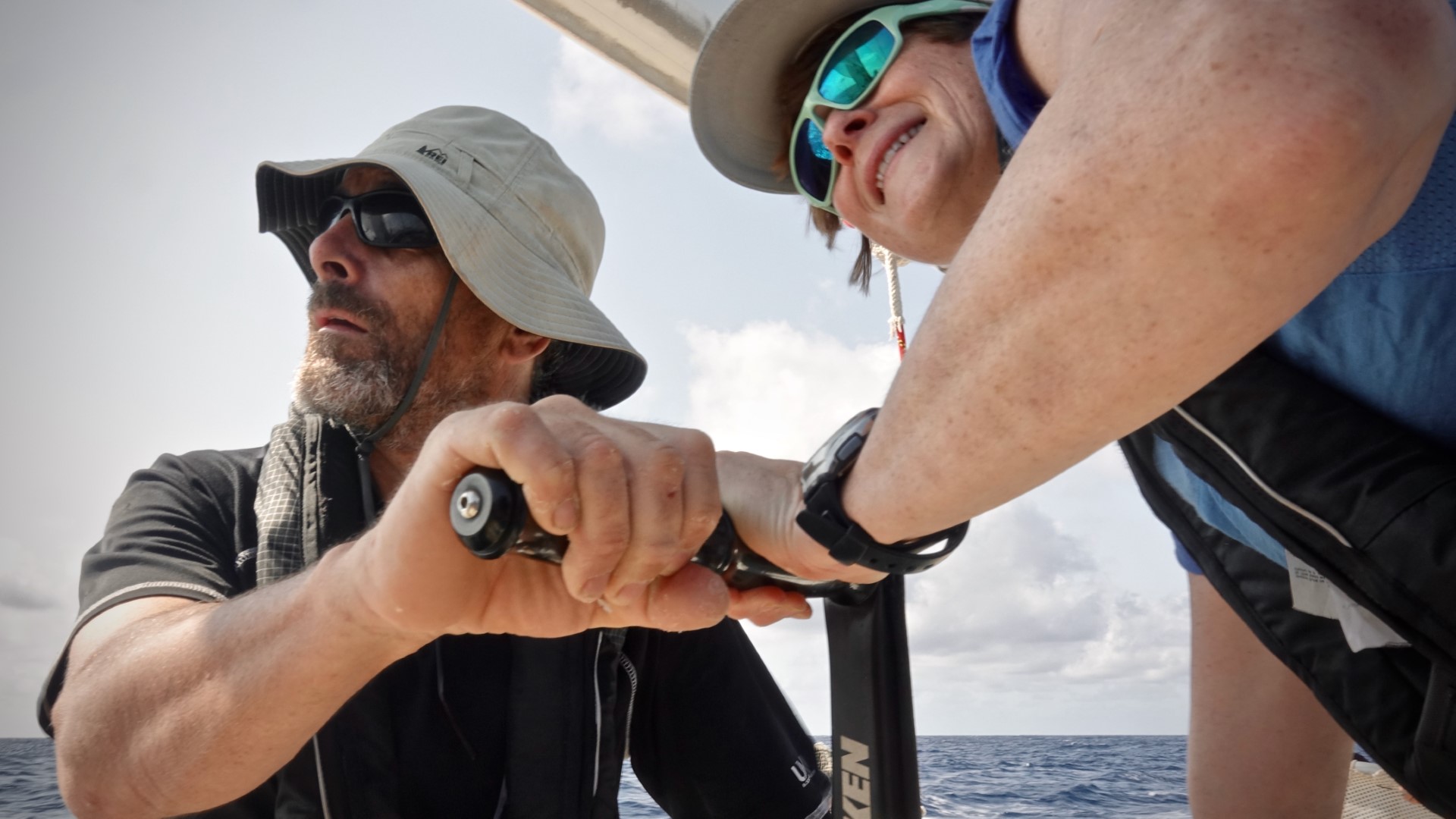 IMAGE: On board Imagine your Korea

Currently in seventh place is Unicef. Skipper Ian Wiggin is pushing forward within the Dell Latitude Rugged Ocean Sprint phase, and commented: “With a maximum of three shiny Clipper Race bonus points available, this was an offer too good to refuse. We blew the dust off our old running shoes and tied the laces in double bows. Peddle to the metal and take it to the limit. There had been four tracks carved in the piest ahead of us. We knew how fast the leading yachts had gone and also how direct they had traveled.”

With less than 2,000nms to reach Punta del Este for those in the lead, can the positions change?

Fourth-placed Dare To Lead Skipper, Guy Waites comments that anything could happen in the last week and a half of racing: “With the fleet now spread over 600nmof South Atlantic Ocean, the arrivals could be spread over a few days but we have one windhole right on our track for the finish line. I've lost count of the number of races that have endured a last minute reshuffle, winners and losers, options and opportunities, nothing taken for granted, anything could happen in the final days of Race 2.”

Find out via the Race Viewer how the fleet are faring as they sprint south with careful strategies coming into play.