In the past 24 hours, HotelPlanner.com was the final boat to cross the finish line of the Elliot Brown Ocean Sprint and, after all boat times were calculated, was declared the winner taking three points after racing the course in the quickest time of 26 hours and 44 minutes.

Despite being in eleventh position, HotelPlanner.com Skipper Conall Morrison and team have picked up three crucial bonus points already in Race 3: the Dell Latitude Rugged Race and he reports: “We are all very pleased with our result in the Elliot Brown Ocean Sprint and need to thank our Greenings joiners who brought something extra to the table for us, re-stirring the desire and drive within the whole team.”

Visit Seattle had the second quickest time claiming two points with 27 hours and 4 minutes, and PSP Logistics picked up the final point with the third quickest time of 29 hours and 39 minutes.

Wendy Tuck, Skipper of current race leader Sanya Serenity Coast, was quick to congratulate her rival Skippers: “Well done Conall, Nikki and Matt on your Elliot Brown Ocean Sprint points. There’s not much sprinting going on right now - we have found the world famous Indian Ocean ‘keep you away from the cold wine’ Doldrums.

“We are here enjoying the sunshine and flat water. The ocean is an incredible blue but just one important ingredient missing, WIND!”

Yesterday’s race leader, PSP Logistics, is currently in Stealth Mode with Skipper Matt Mitchell explaining: “I opted to go for secret squirrel so that the guys behind won't be able to gauge our progress, be it good or bad, meaning that they can't sail around us or follow our route through if it's successful.

“We had a good run yesterday although I am getting a bit concerned by Nikki and her team on Visit Seattle as they have been creeping up on us for the last day or two.”

PSP Logistics will re-emerge from its invisibility cloak at 1800 UTC this evening meanwhile Visit Seattle is the latest team to go in to Stealth Mode and will be until 0600 UTC tomorrow.

Qingdao, which has played its Joker Card for this race, is therefore currently in second place on the Race Viewer standings with Dare To Lead in third but both are concerned about the impact of the wind hole that has caught the race leader. Dare To Lead Skipper Dale Smyth reports: “A night under our windseeker and a dying wind means we are getting sucked more and more towards the gaping hole of wind that is waiting to swallow the fleet. It will be interesting to see how it will affect the standings as it becomes a bit of a lottery.”

Skipper of fourth-placed Unicef, Bob Beggs, remains more optimistic having taken a more easterly route: “Code 2 (mediumweight spinnaker) is aloft, boat speed 10 knots plus, the sun is out and the sea is flat. It even looks as though we might just skirt around the wind hole without too much delay, fingers crossed…” 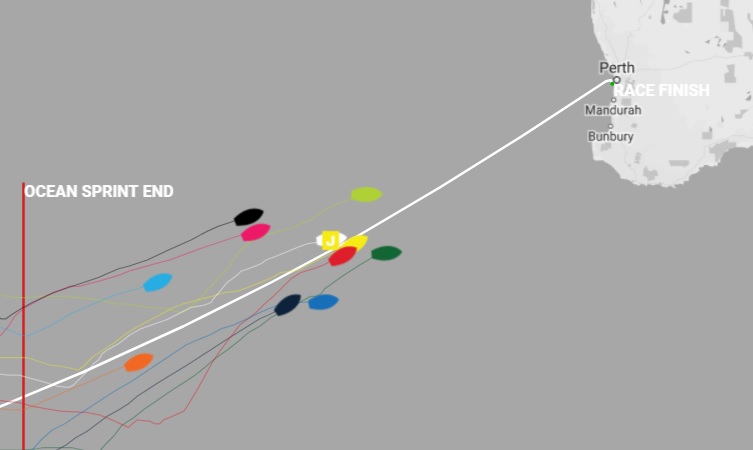 GREAT Britain is currently in fifth position while, further north, a close contest is taking place between Liverpool 2018 and Garmin in sixth and seventh position respectively. All teams are keen to get to Fremantle as quickly as possible with Garmin Skipper Gaëtan Thomas praising his crew, nicknamed ‘the pirates’ for their efforts so far, particularly after the successful medevac of Erik Hellstrom: “I think we all want to arrive now, we experienced quite a few things on this leg, crew is tired, boat is tired…I am really honoured to sail here with my pirates.”

Teams toward the back of the fleet have been using the opportunity provided by lighter airs to get ahead of the jobs list before arriving in to Fremantle with tenth-placed Nasdaq Skipper, Rob Graham reporting: “After a very chilly clear night with magnificent stars and a new moon, the sun is out today, the sea is almost flat and it finally feels as if we are getting closer to Australia. This has brought the 'arts and crafts' activity back on deck - splicing this morning, trying to tick a few items off the jobs list before we arrive.”

Clipper Race Meteorologist, Simon Rowell, has good news for the teams once they get through the latest wind hole reporting that the satellite image shows clouds streaming downwind from Cape Leeuwin, so there is wind going the right way once the teams get through it.

For an idea of when the fleet is expected to cross the Finish Line, please see the Estimated Arrival Times on the Clipper Race website.

Race 3 Day 21: SUPPORT STREAMS IN AS TEAMS COUNT DOWN TO FREMANTLE

As the Clipper Race teams look ahead to arriving in to Fremantle later this week, Skippers from across the fleet…

Thoughts of love and support for the family, friends and crewmates of Simon Speirs remain at the forefront of the…