PSP Logistics has moved into pole position on Day 9 of the Dell Latitude Rugged Race to Fremantle. Sticking to the more southerly route, it has taken a 32 nautical mile lead over Sanya Serenity Coast, which until now has led the entire race.

Skipper of PSP Logistics, Matt Mitchell, said: “After investing a bit of time yesterday in a southerly tack it is now starting to pay dividends as we are reaching at 10 knots with 100% VMG (Velocity Made Good). The wind is due to go back on the nose to the southeast again later on however, we should still be able to maintain a good angle. Time will tell!”

With the majority of the fleet opting to sail on the unfavourable tack, distance covered towards Fremantle was minimal, with the majority travelling less than 100 nautical miles in 12 hours and not always in the right direction. Sanya Serenity Coast Skipper, Wendy Tuck, explains: “We did our losing tack yesterday, this means we had to tack knowing it would be an ugly angle (i.e. sailing back the wrong way) but needed to do it.

“If we had kept sailing north we would eventually have sailed into the low-pressure system and had heaps more wind on the nose and we really don’t want that, so now we are back on the making leg and nearly pointing in the direction we want to go.”

For Visit Seattle, the tack south really paid dividends. Moving up the positions into third and resulting in a far better wind angle Skipper, Nikki Henderson, reported: “The wind had been slowly building throughout the day, and by dusk we were sailing on a comfortable close/beam reach with full sails. I nearly fell out my bed with excitement when I finally felt the boat start moving in the right direction!” 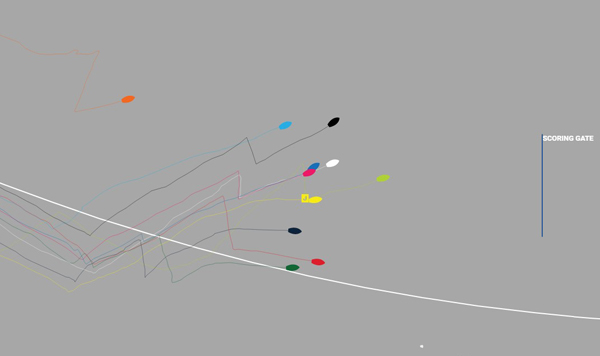 Qingdao and GREAT Britain are currently engaged in a close-fought battle for fourth place. As Qingdao was the first to cross the Scoring Gate in the initial two races, thoughts on board have turned to securing the bonus points. With the gate set north of the rhumb line, it is becoming clear which of the teams have set their sights on it. However, as Skipper Chris Kobusch alludes, this could still be days away: “We climbed the ladder a bit and are hoping to get some points for the scoring gate, which is now less than 450nm away. But at this rate 450nm translates to two days plus and a lot of things can happen until then.”

Due to its northerly positioning Dare To Lead has dropped to sixth, with Liverpool 2018 and Unicef not far behind in seventh and eighth place respectively.

As the fleet continues to battle the uncharacteristic breeze from the east and the resulting upwind conditions Lance Shepherd, Liverpool 2018 Skipper, says: “We continue to fight into the wind to make progress east, watching the daily weather files and localised signs to pick the best route. It is proving difficult and there is often a lot of doubt amongst the team if we are making the right calls.

“All remains to be seen, but it is a relief when you get a position report in showing our lovely pink boat right up amongst the fleet.”

For Garmin in ninth and Nasdaq in tenth life close hauled and heeled over is starting to wear thin. Nasdaq Skipper, Rob Graham, simply said: “We're still slogging away, and still waiting for that wind shift.”

HotelPlanner.com, currently in eleventh following a successful medevac in Port Elizabeth on Day 4, is also now back on the favourable tack. Skipper, Conall Morrison, reports: “This morning sees us close hauled on a starboard tack making a course for somewhere like Bali. My calculations make it as over 80 percent the right direction, better in a gust.

“Our sail plan is working well and we should benefit from the winds of this low-pressure system for a couple more days.”

Simon Rowell, Clipper Race Meteorologist, explains that the two weather systems, the high behind the fleet and the low now to the north east are combining as expected. The closer the teams are to the low the stronger the wind will be. Those further north and closest to the strongest part of the system, around the south west and southerly sides, will probably see 50 knot gusts every now and again. Whilst those further south, will have the other problem as the ridge approaches - less wind but at a kinder angle.

A wind hole held up the leading pack of the Clipper Race fleet on Day 7 of Race 3: The Dell Latitude Rugged Race with the teams now back beating upwind. The downwind sailing conditions, that had been expected as part of a Southern Ocean…

With HotelPlanner.com making good speed towards Port Elizabeth to drop off injured crew member, Greg Adams,arrangements are currently being made for Greenings crew members, who are wanting to resume Leg 3, to join Skipper Conall Morrison and his team before…