After the toughest leg in Clipper Race history and a welcome respite in Fremantle, Australia, the Skippers and crew are gearing up for the first stage of the All-Australian Leg 4 towards Sydney, which will be officially known as Race 4: The ClipperTelemed+ Tasman Test.

Race 4 to Sydney will be an exhilarating, cold, fast, hold-on-to-your-hat type of race. The fleet will leave Fremantle and dip down once again into the Southern Ocean, with the fleet to experience the most southerly point of the entire circumnavigation. Vigilance will be key as crew experience some of the most inhospitable parts of the planet, where icebergs flow north from Antarctica.

Teams will slip their lines from the Fremantle Sailing Club at 1200 local time (0400 UTC) in preparation for a Parade of Sail at 1300 local time (0500 UTC), which will be a line astern formation from the top of Fremantle Inner Harbour down towards the North Mole before turning to Starboard and heading north towards ‘Hall Bank’ port lateral mark. 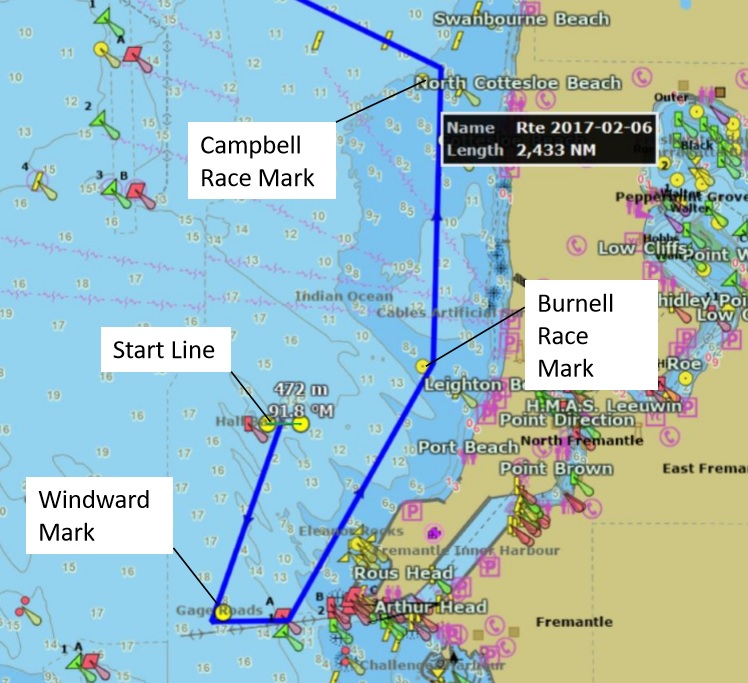 IMAGE: Route of Race 4 Start (not to be used for navigation purposes).

After departing Fremantle, some teams may choose to head south of the rhumb line to take advantage of stronger winds, though this will add extra miles to their race and teams will need to watch for building low pressure systems heading west around the bottom of the planet. Stay too high, and teams risk lengthy wind holes in the Great Australian Bight. After beating against the East Australian Current, the respite of the beautiful Sydney Harbour will await after this punchy, gruelling test.

Armchair sailors will be able to follow the tactical decisions of each team on the Race Viewer.

Once again, both a Scoring Gate and Ocean Sprint will feature during the race, giving the fleet an opportunity to gain some extra race points, and a 24 hour period of Stealth Mode option will also be available to teams.

The fleet will be aiming to complete the race within two weeks, with the teams due to arrive into the Cruising Yacht Club of Australia in Sydney between 14 – 17 December.

Almost one-fifth of Australians, some five million people, call Sydney home and many will be looking forward to welcoming the Clipper Race fleet for the Christmas period before taking on the iconic Rolex Sydney Hobart Yacht Race.

Wishing you could be out on the start line at Fremantle for Race 4 to Sydney, Australia? Well now you can, virtually, from the comfort of your own home, or wherever you have an internet link, on your laptop, tablet or mobile.

The Clipper Race has teamed up once again with the world’s leading and most experienced team of digital yacht racing game experts at VirtualRegatta and after a competitive and emotional Race 3, the virtual ocean racing platform is once again ready for the start of Race 4 from 2 December for the All-Australian Leg. Full details of all the features and how to play are available on our Game webpage.

Watch out on the Clipper Race: LIVE Facebook page to see the teams off the dock for the race re-start on Saturday 2 December from midday local time (0400 UTC).